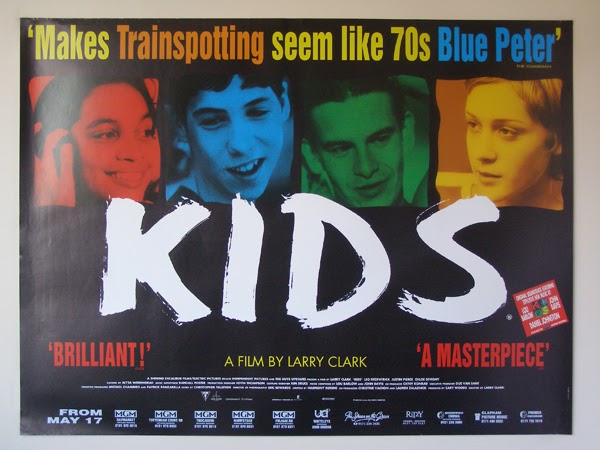 Larry Clark’s debut is a bleak and unrelentingly honest look at how city teen life can be. It stirred up much controversy upon its release and is still powerful today. Drugs, sex, violence and no remorse for one’s actions all make this daring film-making, and almost essential viewing.

It is Telly’s mission in life to have sex. Preferably with under-aged girls and if they are virgins – all the better. The film opens with his seduction of one such girl; he spouts all the sincerity and caring words he can muster and she gives in. As soon as it is over he is out the door, mission accomplished, telling his friend Casper everything that happened in gory detail. We follow the two around their city as they steal, talk about sex, fight, get drunk, get stoned. They are part of a young gang which seems to have spread throughout the whole city. Morals are non-existent, but they believe that homosexuality is evil, or at least a joke. AIDS is a joke too, and all other STDs, as none of them have ever heard of anyone who has had any. We see the juxtaposition of guys and girls talking about their experiences, and planning ahead for the night. Jennie has only been with one guy, Telly, and because one of her friends has been with 9 guys, she decides to go to the sex clinic as support. Her friend comes out clean, but Jennie tests positive for HIV. Jennie begins a very slow race to find Telly, perhaps before he can destroy another girl’s life. Telly is once again on the prowl.

Each performance here is outstanding, particularly Leo Fitzpatrick and the late Justin Pierce as Casper. None of the characters repent what they have done – it’s all they have, and they enjoy it. Even Jennie appears to be passive, taking drugs when she should be finding Telly. None of the sex scenes are particularly explicit, but it is the fact of their age, of course, which caused such an uproar. However, this behavior obviously does go on, you only have to hang around most city streets at night to witness it. The violence is also cleverly edited, but like the sex and drugs, we only need a glimpse to set our imagination and disgust off. There are no happy endings or answers here, perhaps giving fuel to those who say this is just exploitation. For me, Clark is simply exposing a particular reality, maybe in the hope that we can do something about it. The fact remains that (some) teens have, and probably always will continue to do these things, but maybe not with such a lack of remorse.

Let me know in the comments what you think of Kids and if it has any message to get across.