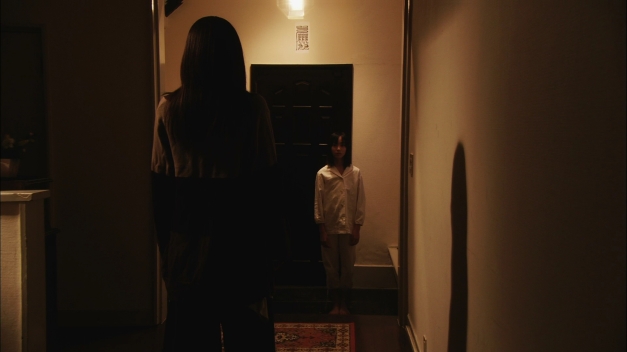 It has been quite some time since I first watched The Grudge and loved every second of it. Since then I watched the original Japanese TV movies (which The Grudge is a sequel of even though it seems like a remake) and the director Takashi Shimizu’s own US remake. I haven’t actually watched the US The Grudge 2 (also directed by Shimizu) and US The Grudge 3 (not Shimizu) partly due to bad reviews and partly due to Part 3 sounding like a straight to video mess. And of course partly because I was burned out on J Horror by that time. Black Ghost and White Ghost had been popping up on my Amazon Prime Viewer for quite some time but I’d avoided them as they sounded like even worse straight to video cash ins, but I finally relented and gave them a shot. Made to honour the 10th Anniversary of the series, these are two stories which deviate from the main plot of the main series, but are they any good!?

Black Ghost focuses on a young girl who has some sort of seizure and ends up in hospital. Her mum and dad have marital problems and the nurse looking after the girl begins to see, hear, and experience spooky things. In the grand Ju On tradition, this is only one piece of the puzzle and the film is split into interweaving chapters centering on a specific character. Each chapter may only be a few minutes long, generally less than 10, and as the movie progresses the overlapping becomes more pronounced. What does and will continue to put viewers off the series is its unwillingness to assist the viewer through the non-linear narrative; there is no Present Day marker, followed by 2 Months Earlier or any indication of date – the story jumps around and the clock keeps ticking, leaving it up to the viewer to work out the true sequence of events. Indeed, there may not be one true sequence as we have seen in the main stream of films that time itself is a loose notion and the sound of a dying character may be heard an investigated by that same character hours, days, or weeks before it actually happens. This lends a certain replay value to the movies – it is confusing and disorienting first time around, but a second watch smooths a lot of the edges while also serving to immerse you even more fully in a plot which doesn’t try or need to make sense – death is coming and there is no escape.

Discussion of plot aside, most will want to know if the film is scary. This sort of thing is subjective, but if you were creeped out by the originals then I don’t see why you wouldn’t at the least find unsettling moments here. The series has always relied on jump scares and atmosphere and we get both of these in the opening moments thanks to a school kid and a window. Black Ghost is more atmosphere heavy than laden with jump scares – cameras straining at some shadow just around the corner, something moving under a blanket or behind a curtain, and of course a soundtrack of gurgles, cries, and death rattles. The old familiar sound returns and while it still chills the bones, it doesn’t have the same impact without Kayako clawing her way towards the screen. In essence it is a retreading of the same old scares, but they are still effective especially if you are susceptible to such things, as I am. Adding to this atmosphere are a couple of notable additions – the performances are all strong, real, which is important given the actors don’t have a lot of screen time, though an argument could be made for there being too many characters for such a short running time. Finally there is a strange effect or glitch on screen in certain scenes; I assume this was not a fault of my streaming but a deliberate choice similar to the film glitches in The Ring. In some scenes there was a weird wavering around the edges of the frame akin to a mirage or some atmospheric refraction. That’s the best way I can describe unfortunately, a shaking around the edges as if something was trying to break through into our reality – there wasn’t any consistency which I could pick out – I assume it was added to make things more ominous or warn of an upcoming scare, but sometimes it happened when two characters were talking – no scare or sense of tension. oh yes, there is one truly excellent make-up/special effect towards the end.

So, who would I recommend this to? Grudge fans obviously, first and foremost. This doesn’t fill in any gaps from the main series or provide any resolution, rather it seems to be a similar story set in the same universe. There isn’t enough time to form much attachment to the characters, the plot is convoluted and non-linear, and the scares don’t offer anything new. With all that said, I enjoyed it, I was a little scared in places, and the idea still intrigues me as much as the execution. You won’t lose much by sacrificing an hour – so if you find this on streaming, give it a shot.