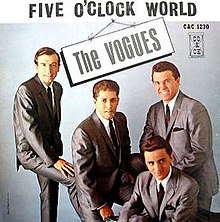 Greetings, Glancers! Here we go, another artist I know nothing about. I look at the band name and the album name and I know nothing. Is it a girl group? Is it another British Invasion band? Is it an American response to the British Invasion? Is it Jazz, rock, pop? Am I embarrassing myself by my lack of knowledge? Am I boring you with these questions? Hit play!

Five O Clock World: Skippy guitar. Dusty Springfield rhythms. Well, they’re men so that’s one mystery solved. A catchy verse with lots of yipping in the background. A breezy chorus which stinks of Swinging Sixties loveliness. Some surprise falsetto runs post-chorus. Strings and trumpets. That was short and sweet and fun.

Goodnight My Love: Slow organ and sax and blues. The blues sweeps away to became more of a vocal group pop ballad. The horns seem to be a little off key or out of sync with the vocals. Pure and smooth vocals – could be anyone singing though. Feels very much like a 50s ballad. It’s nice, I can imagine this being a slow dance at a 1950s Prom.

Sunday And Me: In reading the YouTube comments it looks like this is yet another covers album. Luckily I don’t recognise any of the songs so they feel new to me. This has a Spanish/Deliverance opening before another boppy melody flops in. At least Sunday is a person and not the actual day. It’s very innocent and sunny.

Everyone’s Gone To The Moon: Dodgy organ intro. I know this one. Not this version. Did I hear it on another recent 1966 album? Quite possibly. It’s dreamy but a little boring. The sound quality of the version I’m listening to doesn’t help.

Let’s Hang On: Another organ based ballad. Then da phat beat drops. It’s about to go rock, then it goes weird instead, with a lot of falsetto yaps and harmonised oohing. The lead singer sounds like he’s struggling to reach the high notes. I think this deserved another take or better lead vocals. The song is weird enough to be interesting with a lot of layers to the melodies. The vocals are terrible, it’s clearly beyond them, but I imagine it’s a tough one to sing.

A Thousand Miles Away: Better vocal performance this time – a simpler song in a lower key. It’s something your Grandmother would have thought was square. You only need a couple of these in an album, that’s three or four now.

One More Sunrise: Sexy slow jazz. While the kids were slow dancing at the prom, the teachers were eyeing each other backstage while swilling from the confiscated hooch. Nice arrangement, but it doesn’t go anywhere. It’s feels like the half-drunk accompaniment to a dazed walk home in a sunrise or a sunset.

Over And Over Again: Well, I couldn’t actually find this one so I went for a version by some group called the Moonglows. It may not even be the same song. It feels right. These Moonglows guys sound the same as The Vogues, with silkier vocals. It’s another ballad, another vocal group performance. Nothing memorable here.

Make The World Go Away: Out of tune guitars give way to – you’ve guessed it – another vocal ballad. WTF is this – the vocals are going deliberately out of tune. Whoever uploaded this – was this some ploy to avoid a copyright strike? I can’t believe the song is supposed to be like this. It also feels like it has been slowed. Ah well, if you think I’m going to find another version you have another thing coming.

Run Baby Run: I know this one. It’s not as vibrant as the one I know – I don’t even know who did it or why I know it, but I do – there’s something about the main hook and the high pitched vocals which has bored into my brain. I like it, but this version isn’t a patch on the one I know.

My Troubles Are Not At End: Another ballad, with more organ and more oohing and do-be-doing. It’s the same as the others.

Humpty Dumpty: This sounds familiar too. But a crap version. It’s a novelty song or song built around a dance – this sort of thing was big in the 50s. So I may be mistaking it for another such song. It’s not very good, but at least it’s not another ballad.

It started out promisingly – the title track is a good song, as is the performance. I think I liked the second song. But a series of ballads which neither pleased the ear, brain, or heart dulled the senses. For a vocal group, quite a lot of the performances are bland or just not good. That probably explains why I haven’t hear of them. And unless they  had another album in 1966 I assume I’ll never hear them again. I think I need some more metal again.

Let us know in the comments what you think of Five O Clock World!