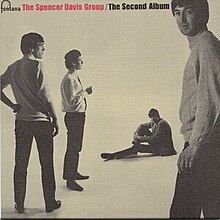 Greetings, Glancers! Last time we had our first truly, fully positive experience in this series so far thanks to Roy Orbison. I hope that trend continues but it doesn’t look good given that I don’t know anything about the Spencer Davis Group. I’ve heard the name somewhere on my travels, and I’m thinking jazz, in which case this is going to be a chore. I’m going to assume this is their second album. Actually, in looking at the tracklist this appears to include yet another series of covers. Lets do this.

‘Look Away‘ starts with piano in a light blues infused jazz rhythm. The vocals are crisp and clean and we then get some fine gospel style backing vocals. I don’t think I’ve heard the song before, but it’s a good start. A solid bass line propels things with the piano over the top and the vocal combo the cherry on top.

‘Keep On Running‘ is a song I do know, but I don’t think I’ve heard this version. It’s given more of a Garage rock feel and the vocals are up there with the original. As always I could do without the hand claps. It’s another one of those songs from this era that you can’t imagine anyone could really mess up, such is the strength of the melody and the energy needed to carry it.

‘This Hammer‘ opens with a suggestion of country infused garage, before dropping into a blues rock stammer. What makes it stand out from it’s ilk is those high pitched vocals. It’s all very Dukes Of Hazzard.

‘Georgia On My Mind‘ starts with slow saloon piano – it’s another song I know from others. Even with the piano doing some jazz spin-offs, it’s too slow and drunken for my liking.

‘Please Do Something‘ opens with a simple two note riff and collection of beats before kicking up a gear for the chorus which brings layered vocals and chords. The vocals are still good, this is probably the catchiest song so far although it does lapse a little too easily in blues vocal melodies at times. Good drums throughout.

‘Let Me Down Easy‘ has very smooth almost Motown vocals and recalls many of the famous voices of that era. The touch of organ, staccato chords, and unusual melodic lines give this an air of mystery. There’s a decent guitar solo in the middle too.

‘Strong Love‘ gets off with a leap, faster drums, up down guitar and bass, some sort of hand drums in there too – it’s quite chaotic but fun. The ‘ooh ohhs’ are catchy and the rest of the vocals and melodies retain interest.

‘I Washed My Hands In Muddy Water‘ is classic blues as you would expect. Big guitar opening, feels Country alongside the Blues. Is it a different singer this time?

‘Since I Met You Baby‘ opens with similar guitar to the previous song, your standard descending Blues downwards scale. This sort of slow Blues quickly gets on my nerves if there’s a run of tracks in a row. There is a certain sweetness to this which I credit to being a bunch of white British dudes and for having a piano section in the middle more than the lyrics.

‘You Must Believe Me‘ sounds familiar. It has both a Swinging Sixties and Motown vibe. It’s certainly more pop-oriented than the run of Blues songs we’ve had. The title is used as the chorus, and it’s a catchy one.

‘Hey Darling‘ is a sex song. Low down sweaty blues at a seductive pace – it’s the sort of song British advertisers would use in a commercial for chocolate. You know the sort – a bunch of frustrated nymphs are watching a hot builder or gardener doing some sort of topless manual labour, and just as they’re about to climax they get distracted by a bar of chocolate, grab it, and head inside to close the curtains. As soon as the solo hits… that’s exactly the sort of solo you hear in softcore. It’s all very distracting and I can’t focus on any other merits of the song.

‘Watch Your Step‘ blasts open with an ascending riff and clattering drums for a frenetic closer. It’s very fuzzy, hissy – could be just the version I’m listening to but it feels more like a conscious choice. A nice slice of early garage rock with overlapping vocals. It’s pretty obvious that the original, which I don’t believe I’ve ever heard, must have influenced the likes of Moby Dick and Daytripper.

It wasn’t Jazz, so that’s already a positive. I still don’t know anything about the group, but this album at least was a mixed bag of 60s pop with a near garage rock infusion, Blues, and Motown – all good things – with the thread of solid vocals and playing tying it neatly together. I don’t think any of the songs are strong enough to make my long-time playlist, but there’s certainly plenty I would enjoy listening to again. A solid album again, but it’s difficult for me to recommend covers over the originals unless the originals are crap or the covers are exceptional.

Nightman’s Playlist Picks: Look Away. Keep On Running. Let Me Down Easy. You Must Believe Me. Watch Your Step.