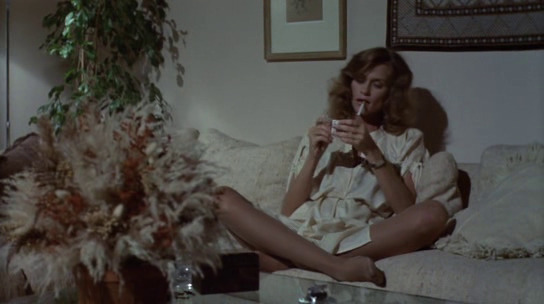 For years I’ve been trying to find a movie that I caught bits of once when I was in holiday in Spain. Helpfully, I can’t remember if the film was in English or any of the actors. It wasn’t subtitled, but that doesn’t help either. The film seemed to be set in an apartment block, though it could have been offices, and appeared to be about a woman being chased by a killer. Lots of stairwells. Perpetual night. I remember it having a distinct vibe, like it was a late 70s movie, though it could just as well have been 80s or 90s. What can I say – I was young, I wasn’t, or couldn’t pay much attention, and I only saw a few minutes. Actually, it could have been a TV episode too, but it didn’t feel that way. When I first read the synopsis for Someone’s Watching Me I thought this could be the one, and the more I thought about it, the more I remember the film feeling like something Carpenter would have made. Spoiler alert – this is not the same movie, and my search continues.

Someone’s Watching Me is loosely based on a true event which occurred in the 1970s involving a woman living in an apartment block, and a stalker watching her every move. John Carpenter at this time had directed a couple of movies to varying degrees of success and was writing and selling scripts – this is before Halloween. After writing the script it was decided to make it as a TV movie which afforded Carpenter an essence of control and freedom, and it was through these experiences he was able to hone the techniques which would turn him into the Master Of Horror.

The film follows a woman played by Lauren Hutton who has moved to LA looking for work. Shortly after she moves into an apartment, she begins receiving strange repeated phone calls and gifts from an unknown person or persons. Feeling unsafe and watched, she goes to the police but as there is no specific threat or immediate danger, they send her on her way. Things continue to escalate, and with the help of her co-workers she plots to turn the tables on her stalker and get to the bottom of the mystery.

The film has various obvious nods to Hitchcock, in theme, tone, stylistically, and it is an efficient thriller for its time. Watching now it feels more like a curio given what we know Carpenter would unleash afterwards and there won’t be anything a modern viewer hasn’t seen countless times. Back in the late 70s, the idea of stalkers and being watched was still fresh enough that stay at home mums, housewives, and working single gals would have been suitably freaked out if they caught the movie. Hutton puts in a vigorous performance and her character is a precursor to many of the final girls who would come along after. She is backed by a number of Carpenter regulars – namely Charles Cyphers and Adrienne Barbeau – and while the film doesn’t have many of the Carpenter trademarks – soundtrack, mood, and a tighter control of the tension, there is enough on display to suggest he was a talent on the rise.

Someone’s Watching Me is a brisk, taut, well-acted piece of late 70s thrills focusing on a steady build rather than gore or outlandish surprises, and it’s a must for any Carpenter fan who has not yet taken the plunge. Let us know in the comments what you think of the movie!