Greetings Glancers! Today’s tale of the macabre deals with two of the sexiest v-words of them all – Vampires and Voyeurism. It’s a story that borrows heavily from movies such as Rear Window, Fright Night, and The Burbs, but can it hold a candle up to those classics?

Lets take a look at Amazon’s blurb on the episode and see if anything sounds familiar: Emma and DayDay Toll have some new neighbours who seem a bit out of the ordinary. The eerie family, a couple and their anemic-looking son wear only black and are never seen during the day. A workman informs the kids that they are from Transylvania.

So far, so clichéd. So, once again we have a dynamic duo with a bit of sibling rivalry thrown in for good measure – AYAOTD staples – I wonder if the parents will be scarce. Naturally, we have an inexplicable character name in DayDay (America). I jotted down notes about this episode months ago, and when I saw ‘DayDay’ I assumed that the auto-correct had flipped its shit for a second and converted something like ‘David’ into this monstrosity. I should have known… I should have known. 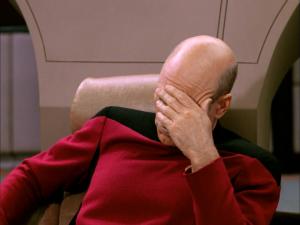 Reading the blurb, it’s another episode that I didn’t recall seeing, although when I watched it some minor things sparked vague memories, such as the actors involved. With a shrug of our shoulders, let us commence with the review.

We open, as with most episodes, on our campfire losers sharing some banter. In these few moments we learn quite a lot about the individuality of each character, but they raise an interesting question which I have often pondered over – why do we tell scary stories at night, or why do scary stories feature night-time so heavily? The answers are obvious and true – we have an innate fear of darkness, it’s often more scary when you can’t see what is (or might be) in front of you, and darkness lends itself beautifully to atmosphere. A hush falls in the night as you listen to a lone voice telling a spooky tale – there is nothing else to see in the surroundings, the only thing to focus on is the voice and the story, and the only distraction is your own imagination. However, as far as horror movies and TV shows go, the vast majority of stories are conducted at night-time – with the most frightening moments, and with conclusions most often coming once the sun has gone down or the light has been extinguished. When I was young, experiencing my first horror films from between my fingers, or cautiously over the top of a book, I always dreaded the moment when night would fall; that was the moment I would take a sharp intake of breath and tense my body, as I knew something horrible was sure to come. What Kristen says though, should surely also be true – if a story is truly scary, it shouldn’t matter when it is told, or whether it happened at night or day. If we look at the true horror stories of our lives – most occur during the day, from terrorist attacks to traffic accidents, to losing sight your child in a crowded place or visiting a loved one in hospital. There are only a handful of supernatural stories on the big or small screen which take place mostly in sunlight, and it’s always been my wish to create something terrifying which takes place during those hours we traditionally feel safest – where can we hide if we are just as tormented by things that go bump in the day?

It’s a moot point though, as our episode concerns itself with those Vitamin D dodgers of the undead – vampires. Vampires, sexy as they may have once been (before they became all Sparkly and mopey), are governed by strict rules, none more so than the fact that sunlight kills them. But what is more dangerous – a bloodsucking demon that can only attack under certain conditions at certain times, or a person with an over-active imagination, someone prone to paranoia and mistrust, and with a will to submit to their possible delusions and hunt down their own truth whatever the cost?

Ironically, our story begins with one of the greatest scenes in horror cinema, and one which takes place during the day – the attack on Barbara and her brother in Night Of The Living Dead. DayDay (sigh) is watching it, when he is interrupted by his annoying older sister Emma. She berates him for being like their dad and watching TV all day instead of getting out into the world and making a difference. Our Emma seems like a firebrand, reeling against white bread routine and middle class suburbia, wishing for something or someone interesting to enter their lives. And just like that, new neighbours move in – at night, mysteriously clad in black, poised together like some off-the-books military organisation. As Emma and Dayday discuss, the newbs turn in their direction in unison – scary times! And with the space of four seconds, where Dayday announces that they’re definitely going to stay away from these new neighbours, they go over to say ‘Hi’!

We’re only a few minutes in so far, but it’s nice to see a decent pair of young actors again – the show continues to get better with regards to the performances of the youngsters. But look, it’s the mother! She’s bound to put in a strong display of acting qua- no – wait, she just backed away from the camera, knocked over the Postman, and disappeared, howling ‘I’m late’ with glee. So, no parents in this one then. That was some slapstick fun though. The mailman does say that he has already met the new neighbours – the same day he picked up an odd illness which has been making him tired and sick. Hmm, could the neighbours, from THE UKRAINE, possibly be involved? We get a mini epic of time passing while Emma becomes increasingly suspicious. We get our first truly creepy moment when the boy next door introduces himself, a genuinely creepy shot of him appearing in the background, complete with an equally creepy ‘hello’.

No sooner have we rid ourselves of that, we are next subjected to a nightmare sequence with a little too much of a pedo-vibe than we would have liked as the daddy next door slinks his way, BOB style into Emma’s room, across the floor, and onto her bed. Thankfully this is followed up by a dual melee attack of Dayday’s entire bedroom wall conveniently being painted as a map of the Earth, and Emma proclaiming that Ukraine is near all those places with ‘ania’ in their name, like Transylvania.

We flick back to the Campfire losers for a quick round of ‘who’s the most annoying’, with Kiki being the winner again, before Emma readies herself to entire the neighbour’s house. To the show’s credit we get a nice throwback to Rear Window as Emma prowls through their basement while the neighbours get invited into Dayday’s house by his useless mother (who looks like a cross between Carrie Fisher, and someone who is not Carrie Fisher). This is all quite tense, features odd music, and even some bizarre Leone-style close-ups of Dayday. It’s pretty funny too, the incredibly hammy accents and puns, though this is offset by vampire mom being hot. Dayday’s mum gives a strange performance, like an American, sleazy, Hyacinth Bucket.

In good old Lost Boys fashion, the kids arm up and return at daylight to dispatch of their neighbours. When disturbed, they decide to hide in the worst possible place, under a tall, narrow table where it would be literally impossible for anyone to NOT see them. Come on prop team, you couldn’t have found a more suitable table? Or thrown a piece of cloth of the top of it? It’s the most ridiculous moment in an episode full of them. Anyway, it all ends with a twist and WHAT THE BALLS WAS THAT NOISE COMING FROM THE BOY’S MOUTH!?

Another decent episode then, nothing too spectacular, but quite entertaining. Lets have a look at what the cast has been up to before and since this episode was created, starting with Emma, played by Suzanna Shebib who has the same odd lispy way of talking as Graeme Millington did in The Tale Of The Prom Queen. She gives a watchable performance, but according to IMDB she only has four other credits to her name – three other minor TV series in minor roles, and in Billy Madison as ‘High School Girl’ back in 1995. Young Dayday (Noah Godfrey) fairs marginally better, also gaining five credits but having a longer role in Babar. Harriet Dove played their mother in what appears to be her only screen credit, possibly meaning they pulled her off the street for a quick couple of scenese and slipped her a fifty. Two minor characters appear – the delivery man (Mark Camacho) and the frail mailman (Johni Keyworth). Keyworth has appeared in a number of never-seen tv movies, series, and done some work as a voice actor in equally unseen shows, but more importantly he is another who is set to appear in a future episode  –The Tale of The Thirteenth Floor while Camacho has appeared in many many shows and movies. He was President Nixon in Days Of Future Past, has voiced many videogame characters, and acts as Oliver in the long running cartoon series Arthur. He is also set to return in a future AYAOTD episode – The Tale Of The Shiny Red Bicycle.

That only leaves us with the vampires – Mum (Francoise Robertson), Dad (Carl Alacchi), noise boy (Johnny Morina). Morina it seems was once an up and coming star thanks to an appearance in Kids Of The Round Table. However, it looks like he only made a few more films I’ve never heard of, including one with AYAOTD’s very own Kristen. Alacci is a fairly recognizable actor from over 70 movies and series including Omerta, The Day After Tomorrow, and 18 To Life. Oh yeah, he also appears in a future AYAOTD episode. I recognize Robertson from Sliders and SG1, and she has also appeared in multiple other series and movies, like Battlestar Gallactica and We All Fall Down.

So, another episode down. next up we treat ourselves to some METAL in The Tale Of The Dark Music. Until then, sweet dreams!

What did you think of this episode? Let us know in the comments, and check out the previous reviews here: