Hal Needham and Burt Reynolds had one of the finest stunt performer/actor relationships in history making a string of hits and memorable stunts. White Lightning has some of Needham’s best work – a film filled with good old car chases and one stunning car jump onto a moving boat which didn’t quite go according to plan. Lady Snowblood and Enter The Dragon fill the martial arts quotient, both fine examples of what can happen when you have highly skilled fighters simulating all out war. Live And Let Die is the sure winner this year – double-decker bus chases, bayou boat antics, and a short sprint over live crocodiles just some of the classic moments.

Glorious stuff, 80s transcended, and probably the band’s best song. This one has the Bond blasts, a fast, rock oriented sound, and most importantly it has the melodies. The video is good fun too. I see that I’m picking a lot of Roger Moore film songs in the top end of the list, but then I grew up in the Moore era and many of his films my favourites. This one is super catchy and evokes plenty of moments from the film. https://www.youtube.com/watch?v=rV4UqmbzIq4

Moore again, and McCartney partners with George Martin once more for another hit. I do feel the Guns N Roses version of this is vastly superior, but credit to the writers for creating this in the first place of course. The film always creeped me out when I was young, what with all the skulls and voodoo stuff, and the song was also able to send shivers up and down my spine. Those Bond blasts serve a duel purpose then – they are clearly supposed to call back the Bond themes of old, but are also clearly designed to scare – many moments of the song are just off enough to disturb the listener. The main riff is excellent, the song is filled with beautiful slow moments, there is a hell of a lot of chaotic moments too as instruments race and collide with one another. It’s a fantastic song all round, worthy of much more than simply being remembered as a Bond song. https://www.youtube.com/watch?v=784k3EEuZYA 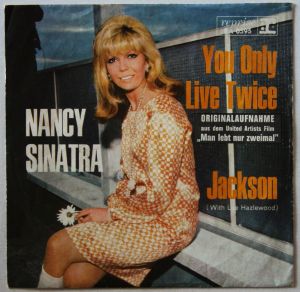 It has been slightly sullied by Dickhead of the Century – Robbie Williams, but even his worthless mitts couldn’t truly taint this slice of perfection. My favourite Connery Bond movie has a flawless theme which opens with some of the most gorgeous strings ever recorded. The song has an ever so slight oriental feel, Sinatra gives it the full frontal performance, the guitar copies the string melody, the lyrics are possibly the best in any bond song, and it’s one of a handful whose melodies are sublime throughout. It’s elegant, epic, and just the right length. https://www.youtube.com/watch?v=hcIl_6amBvU

There you have it, my top 3 Bond songs. I’ll write a summary post showing my picks in a single post, but for now feel free to leave your thoughts on my picks in the comments below!

The Way We Were was the winner this year, of course they would pick that, and it has gone down in history as one of the most popular movie ballads. It’s saccharine muck, and I’ve never been a fan of Streisand’s wailing. You can’t deny its tearjerking power – with a different singer and a less 70s production I’d like it more. Cinderella Liberty deserves a better song – the lyrics are strong but the lazy jazz and drawling melodies do little for me. Things pick up in the chorus, but barely. Love is such a lazy title and it’s a song which harks back to the Disney ballads of the past, the dreary string sections are there but updated, there’s an experimental feel to some of the backing guitar and flute stuff, and while it’s all designed to be dreamy, the melodies fall flat. Maddie Bell does her best with Love Went To Waste, but alas it’s too sleepy and melodically dry to affect me. Live And Let Die is the clear winner here, packed with impact, force, speed, and the melodies scream out of the speakers – I still prefer the Guns ‘n’ Roses version though.

Only the official winner and my winner survive to my list of nominations, although Robin Hood returns with a different song selection. Whistle Stop is by far the most memorable song from Robin Hood and while it’s barely even a song it is the one I have the most fondness for and frequently find myself whistling. In fact, any time the movie is mentioned it’s the first thing to enter my head. As the theme for the songs this year seems to be ‘love’, I add The Love Doctor from Cleopatra Jones. Millie Jackson records another Motown Hit – it’s pretty generic as far as the genre goes, but that doesn’t stop it being catchy and apparently the inspiration for the Manics’ It’s Not War Just The End Of Love. Finally, one of the most haunting and memorable moments from a movie known for several, is Willow’s Song – coming as Britt Ekland’s character cavorts naked in her room to the repressed distress of Edward Woodward. It’s one of horror’s finest songs, and much stronger than most of the official nominees.

Let us know in the comments which song you pick as winner!

My personal favourite Bond Movie (largely because of nostalgia) and along with Moonraker, the most bizarre outing for the secret agent. Where Moonraker failed though, Live And Let Die succeeds. There are good set pieces, fights, girls, funny moments (not as over the top as they would become) and unusually for a Bond film, it is actually quite scary in parts, especially for the younger viewer.

When Bond is sent to America to investigate the deaths of several British Agents, his search leads him to Mr Big, a Harlem crime lord. With further investigation, Bond finds a drug-smuggling link between Mr Big, and Dr. Kananga, a mysterious man from a Caribbean island. Bond flies to Kananga’s island to stop the massive Heroin dealing. There he meets the beautiful Solitaire played wonderfully by Jane Seymour, a virgin who has been enslaved by Kananga as her mystical powers bring him success. Bond soon finds himself entwined in voodoo forces he can barely fight, and struggles to complete his mission.

Plenty of stunts and action sequences, chases and humour make this an instant Bond classic, but the characters and performances of Yaphet Kotto and his various goons make it one of the best. Tee Hee is mysterious, Whisper is memorable, and Baron Samedi is a strong Villain as he seems to be immortal. This marks the appearance of Sheriif GW, and his comic escapades which are either annoying or very funny depending on your point of view. Moore gives a good performance, bringing the series in a different direction, and Seymour is one of the most beautiful Bond girls. There are many memorable moments, including the famous train fight, and Kananga’s explosive end. Probably the most scary Bond film so far, in fact there has not been another one like it, and when i was young it was always the one i most looked forward to seeing. There are flaws- it does have more slapstick humour than previous outings and Bond does not seem as tragic or cold a character as before.

The features, like all of the Ultimate Editions are excellent, along with impressive picture and sound restoration work. There are trailers, documentaries, and an interesting early sight of Moore as Bond.

Feel free to leave your comments on the movie and review- is this one of your favourite Bond films or do you think it’s another embarrassing Moore outing? Don’t forget to check out my other Bond reviews in the DVD section.