In this latest series of posts, I’m going to talk briefly about some of my favourite TV shows of yesteryear, and some which I’m watching at the moment. In ‘Sh*t I Used To Watch’ I’ll reminisce about some TV shows that I used to watch, from my childhood up until roughly the time I graduated from University – by and large these will be shows that I haven’t watched since that period, or have only caught a small numbers of episodes of. In ‘Sh*t I Watch’ I will talk briefly about the shows I’m watching at the moment, and will deal with both current series which have not yet been cancelled or completed, and those which I am catching up on having missed first time around. I’ll try to post one of these each week, but as regular Glancers will be aware, my regular posts are fairly irregular. Some of the shows in both categories which I’ll talk about will be ones you should all be familiar with, while others will be extremely niche and I can only imagine about three other people will have ever heard of.

It’s my assumption in these posts, perhaps more than all the other junk on this blog, that you will get a murky picture of the person I both am and once was, and that maybe in a wider lens you’ll get a higher level look at the White, Western, child of the 80s. I’ll let you make your own conclusions, but the most obvious may be that we are what we consume, and our lives are rarely more than a procession of vicarious experience. Drill deeper though and we find a less bleak vision, seeing a communal, shared, loving experience as the most important moments of our lives as a species are no longer things like ‘Which Side Won The War’ or ‘Who Got To The Moon First’ or even ‘Why Are We Here’, but rather ‘Will Rachel And Ross Get It Together’ ‘Who Killed JR/Laura Palmer’ and ‘ WTF is Laddergoat’. Actually, that is kind of bleak.

In today’s post, I will be looking at one of the seminal after-school comedies of my childhood, one backed by a legion of talent and which is still spoken of today in Holy terms. 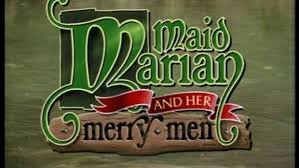 Maid Marian And Her Merry Men ran for a glorious 5 years from 1989 to 1994, though in that time a meagre 26 episodes were produced. I think those episodes have been repeated several times over the years as I remember watching them during my mid teen years, and laughing my balls off all over again. But, what is the show about, some of you may be asking? The show is very British and features many, many in jokes and topical humour which you’ll likely only ‘get’ if you’re from England, Scotland, Wales, or Ireland. However, the humour is so sharp and wide-ranging that there is much to enjoy here for anyone with a sense of humour, from childhood to adulthood. Having watched some highlights recently on Youtube to see if it still holds up, the answer is a resounding YES.

The show a cross between Monty Python and Blackadder, but aimed at a younger audience, and set around the Robin Hood mythology. The central twist in the tale is that our hero, Robin Hood, is in fact a big sissy, getting by on an invented reputation and that it is actually Maid Marian who is the brains and brawn of the operation. We also have the band of Merry Men, each wonderfully written and with twists upon the character you know from legend – the show had such a power on me that it’s difficult for me to take the ‘real’ Robin Hood characters over the ones here. Each episode basically follows the misadventures of Ye Goodies as they try to mess up the plans of the wicked Sheriff Of Nottingham, King John, and his assorted Goons. 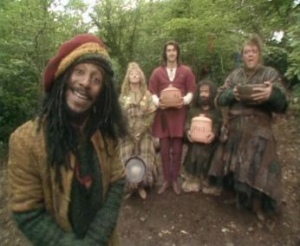 Episodes featured slapstick humour, offbeat, bizarre, and wacky plots, and lots of wonderful songs which will get stuck in your head for days. My favourite though was the satire and how the show would blend its historical setting to modern-day issues, with frequent meta references to movies and TV. I remember when I first watched Prince Of Theives I was laughing my head off that the actor of played Rabies appeared, and that later the show parodied both that movie, and his appearance. The show was always one that I talked about with friends of a similar mind in school the next day, particularly on the reruns, as you could tell instantly the caliber of a person by whether they appreciated the show or not (Spoiler – if you don’t like this, you’re a moron).

As I’ve been typing this, the wonderful theme music hasn’t left my brain – once heard never forgot. I admit I had a big crush on Marian when I was younger, as played by Kate Lonergan. According to various site, Lonergan has since left acting after featuring in a small number of other movies and TV shows, a pity as she was such a delight, but if she’s happy I’m happy. Other talents in the show included Tony Robinson (Blackadder, Time Team), Danny John-Jules (Red Dwarf, Blade II), Mike Edmonds (Return Of The Jedi, Dark Crystal) and a host of other familiar British actors. I’ve said it before and I’ll say it again – as a child of the 80s, we truly did grow up in a Golden Age of Kids TV – and not only from an animated perspective. Aside from all the kid oriented movies of the time, from The Goonies To The Karate Kid and beyond, we had shows like this to give us hope and entertainment and respite from the grim realities of school, homework, and just being young and frustrated, defenseless and voiceless. I think this will be a recurring thought over the rest of these posts.

If you’re interested, please seek out this wonderful series – available to purchase on DVD, and many clips available to browse on streaming sites. You’ll be a better person for it. If you have fond memories of the show, feel free to drop a comment below and if you’re particularly bitter you can even shake your fist at the sky and scream about how they don’t make kids shows like this any more!