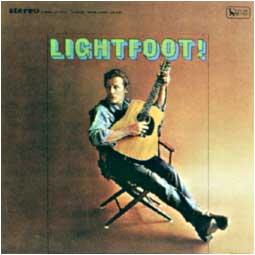 Greetings, Glancers! Never trust an album which ends with a exclamation mark. Anyway, I don’t know an awful lot about Gordon Lightfoot beyond that he’s a singer songwriter. At least that should mean we get an album of original material rather than the same old covers and standards. Looking at the tracklist, there is one song I recognise – a cover –  but it’s a song I like. Lets see what this is all about.

Rich Man’s Spiritual: Lovely folk guitar intro, fills you with warmth and happiness. Vocals a little too deep, too Country for my tastes. Lyrics hit that idyllic 60s vibe. The vocals don’t hit the emotional peaks I’d want and the melodies are too short and cyclical. Still, good enough start.

Long River: Great guitar again, smooth and sweet. There’s still that flicker of Country in the vocals, which makes sense given what he’s singing about. Vocals are nice though, easy to swallow without being too saccharine. A whistling part. Good, but too middle of the road for my tastes.

The Way I Feel: There’s something I love about just a singer and a guitar and no other crap. It does get samey after a while if I listen to too much – much faster than a standard band with full arrangement. The music and melody in this one are more interesting. It’s music for a contemplative mood. Too much of it puts me in a funk. Especially when it’s repetitive like this.

For Lovin Me: Faster. Definitely more Country. A more fun song but still missing the emotional hook or the quality melody or the sense of change and dynamics.

The First Time I Ever Saw Your Face: Lets see what he does with this. I’ve loved versions of this – I can barely listen to the original though. This is unfortunately closer to the original. It’s more palatable than the original, but it’s drained of emotion. He’s just singing sweetly and I feel no connection to the words, and the melody and phrasing are changed from those versions I like. He seems to never change his approach – every new verse is delivered in the exact same way – he may as well be reciting the alphabet.

Changes: Another cover I believe, though I’m not as familiar with the original. It’s sweet again but every positive and negative I’ve mentioned on every other song also applies here. There’s a lot more to go folks.

Steel Rail Blues: Into the second half and more of the same. This has more of a hook, every so often. White boy blues. More lyrics about going home or going somewhere.

Sixteen Miles: The thing about folk music that I like and can listen to consistently always comes down to the voice – Lightfoot has a good voice, regardless of whether it’s the style I prefer – but it’s that lack of change in his delivery. Taylor, Mitchell, hell even Dylan will change it up from line to line – adding inflections, slurs, runs, a bit of gravel, a bit of force or restraint. This guy just sings at the same plateau and it really does make the whole repetitive.

I’m Not Sayin: Another faster, lighter one. Musically. The lyrics are typically good – descriptive if not overly poetic or unique. Better than most chart drivel. This one is more fun than most and I could see myself choosing this over the others. I’m not sayin I would, but if I was forced to choose.

Pride Of Man: This is in a similar pace to the one before. I prefer these faster ones – not just because he gets through them soon, but they feel more urgent.

Ribbon Of Darkness: Country whistlin’. Quite possibly while sittin’ on a rockin’ chair, drinkin’ and a spittin’ and a lookin’ o’er a field of wheat. Slows nicely before resuming for the verse. Or was it the chorus? It’s all just a bunch of words and unvaried guitar now.

Oh Linda: Well, this one is different. Leading with some sort of bass. That alone has allowed him to try something different with his vocals and melodies. Unfortunately he falls back on the same traps and just keeps doing the same thing over and over and over. CHANGE. SOMETHING.

Peaceful Waters: This is moderately different again. Feels genuinely melancholy. Too little too late, and not startling enough to truly stand out.

As is often the case with many of these albums, I dig the first song but then thee next few sound the same, and then it becomes apparent that the singer or band have one level. Or at least that’s how it’s conveyed to me. Towards the end of this album he broaches new territory but doesn’t actually do anything with it. Maybe that’s the restriction of folk, maybe that’s because he is restricted as an artist and couldn’t break through the tropes. Maybe it’s because I’m writing from fifty years after the songs were written and everything here has become so hackneyed and watered down that whatever truth and power it may have had has long since faded. Whatever emotion he put into these songs doesn’t translate to me, whether that be down to the genre, his voice, his vocal approach. There isn’t enough in any of the songs to grip me or speak to me on a melodic level and even as much as I enjoy the simplicity of a solo performance, the limitations of that approach become apparent very quickly over the course of a whole album. Unless you’re a beast. Lightfoot is not a beast.

Let us know in the comments what you think of Lightfoot!

Nightman’s Playlist Picks: None are bad, though none are really good. So take your pick as any is as average as the next.