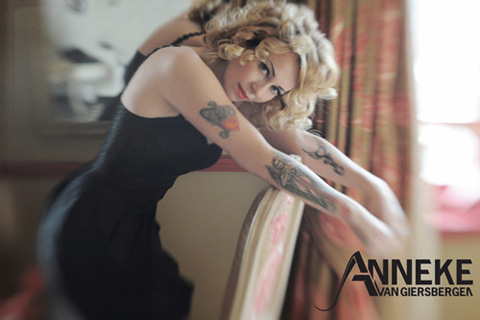 Anneke’s 4th studio album is all about change; the album title suggests as much at first glance. Not long before the release Anneke abandoned the Agua De Annique moniker after admitting that it wasn’t the easiest or most recognizable name. Musically there are more changes, though fans should not be apprehensive as there is nothing drastically different- longtime fans will know what to expect. This is largely another melody driven, guitar laden rock album which moves from outrageously catchy commercial moments to tear-jerking quiet moments and with plenty of pace and power in between.

‘Feel Alive’ is the lead single from the album, one with another buoyant video and excited delivery. With this third release, and with the band name changing from Agua De Annique to simply Anneke’s name, we see a confident performer now blazing her own trail and free to explore whatever ideas and sounds she desires. This excitement and freedom is clear in every note and lyric in the song, an upbeat song with a nice build-up so a soaring payoff chorus; A jubilant declaration of love.

‘You Want To Be Free’ is another upbeat track, this time more of a rock song than the lighter first track. Another love song of sorts, it speaks of the indecision in relationships and sounds like the advice of a friend. There are a couple of standout moments here, the bridges, the main riff, and the ‘yeah yeah’ middle section, though the chorus and verses are not the most memorable.

‘Everything Is Changing’ is a softer, slower, piano driven song with stuttering, yet ethereal verse vocals. As the title track it isn’t as epic as you would expect, with a decent chorus but doesn’t catch the ear. It’s an ok song, well sung of course, just a little bland.

‘Take Me Home’ quickens the pace again, another decent rock/pop crossover with piano and guitar riffs merging as well as some studio magic to give the impression of a wide-ranging wall of sound style production. This one is catchy enough, with another good chorus, but may lack the all-important killer ingredient.

‘I Wake Up’ opens with an unusual drum loop and synth section which pulls in and out in a tidal fashion. This one always gives me the impression of a lost Pet Shop Boys song, but with all the camp removed. Anneke sounds like she is very close to the listener’s ear for the verses on this one, and the chorus is another good one – a slightly eerie feel to it.

‘Circles’ may be Anneke’s strongest song yet, a teary piano led ballad with emotive lyrics about loneliness, hope, and of course the circles of our lives. Again, there is an eerie nature here, but that is overcome by the gorgeous, emotional vocal performance. With a massive chorus, exquisite middle section, and glorious close as the violins join in, this is the true centerpiece of the album.

‘My Boy’ has a tough act to follow, but it’s arguably the best straight rock song Anneke has written so far. With a classic snare intro and simple, but awesomely effective riff, this is a mid-paced guitar, drum, bass driven song with beautiful verse melodies. There is also some studio trickery as the song progresses, but the best moments are the build up to the wonderful chorus – bridge and chorus are both perfection, blending together and building to a climactic eruption (more like the build-up and scoring of a winning goal than what you’re thinking about). My favourite bit though is the ‘even though I’m crazy about my boy’ section, beautifully belted out and adding an extra level to an already euphoric chorus.

‘Stay’ is a fairly heavy song as Anneke goes, with loud, bouncing Led Zep style riff, and delightfully vicious lyrics. It’s another one where the verse, bridge, chorus all meld together wonderfully, building and bleeding into each other. We even get that killer ingredient, after a short instrumental interlude, as Anneke adds a final, different bridge right at the end.

‘Hope, Pray, Dance, Play’ has the appeal of another single with its big intro and sing-along chorus. It’s another decent track, but it doesn’t have that touch which makes it click with me personally, especially coming after a killer trio of songs.

‘Slow Me Down’ is a fast paced rocker, fueled by muted chords in the verses and lifted by a fist-pumping chorus. Nice, quick shooter lyrics, another effective middle section, and a few moments of vocal brilliance (aside from the usual expected brilliance of course) ensure this is another one to put on repeat.

‘1000 Miles Away From You’ closes the album, a choice which I’ve always seen as an odd one. I’ve always felt that the closing track of an album should be instantly memorable, a slam of a door that you will want to open again. For an album that has mostly been on the heavy side, this one has an epic feel, again calls back that eerie, angry tone, but doesn’t stick in my mind as much as others for some reason. Listening again with a pseudo-critical ear, it is slow, without being plodding, veering between quiet and loud pieces, but the middle interlude doesn’t work, sounding an awful lot like a similar section in The Gathering’s song ‘Home’. Rather than going out with a bang though, it drags its heels for the final minute.

The heaviest album Anneke has made since leaving The Gathering, this is a great rock record with a superb production. There is a wide scope in the theme of the songs, allowing Anneke to sing with a greater range of emotion than she usually does, from a lyrical perspective. There are introspective moments, and there are moments of rage; there are dedications and warnings, apologies and consternation. While there are less standout commercial tracks here, there is still a handful of songs which deserved to shoot up the charts in any country, while the rest are weighed heavily in the cult or fan favourite character, rather than the album filler one. Ultimately, it’s another vital release for fans, and contains a number of songs which would certainly win over new fans if they had the opportunity to hear them.