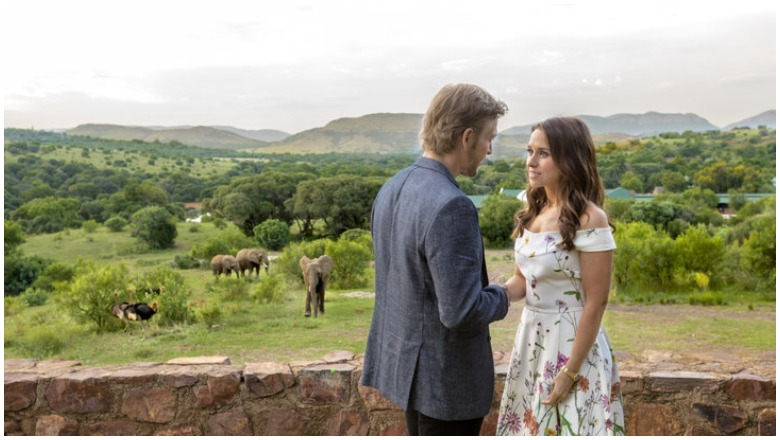 In probably the final Lacey Chabert movie I’ll be talking about until next Christmas, we needed a departure from the cold weather. Christmas is festive and all, but there’s only so much snow and smiles one man can take while trapped inside during a pandemic and looking beyond the living room window and seeing only a grim and stricken wasteland of desiccated trees and muddy pastures. I needed some sun, damn it, and Lacey was going to give it to me. Luckily, she just so happened to have made a movie set (and shot on location) in the scorching African sun. Plus – giraffes!

We begin as we always do with these reviews – Lacey plays a successful 30 something woman in the big city – casual boyfriend, strong teeth, decent career – but there’s still something lacking. Out of the blue she receives the tragic news that her (I want to say Uncle) last remaining relative has passed away and that her presence as been requested in Africa to discuss the Will. Expecting some arbitrary ornament or antique trinket from the childhood holidays she spent in her uncle’s wildlife reserve in Africa, she takes the opportunity to take a break from the monotony of her daily life and get some sun. Meanwhile, the staff and locals of said Wilflife Reserve are in turmoil because of their loss, knowing that if somebody cannot stump up the funds to buy and look after the Reserve that an uncaring chain is going to swoop in and usurp the place, sucking out its soul and converting it into another upmarket hotel chain for snobby types. You see where this is going, right?

Lacey meets the staff, some of whom she remembers from childhood, others she might just feel a little under-camo-trouser-tingling for. She (but nobody else) is shocked to hear that her uncle has left the Reserve, the hotel, the animals, the land, in her name leaving her torn between selling to the only available buyer, or somehow giving up her life in the USA to tackle a way of living and business she has almost zero experience of. It’s a dilemma further complicated by her growing love for the place, her increasing affection for a particular staff member, and the sudden appearance of her boyfriend from back home. Giraffes!

It’s another sweet Chabert tale which isn’t going to offend or challenge anyone, and whose soul aim is to leave you feeling warm and snuggly. My wife didn’t think much of it and much preferred the more traditional Christmas fare, while I was more than happy for the change of scenery. If they had not filmed this on location, the film wouldn’t have the same impact. It’s a gorgeous location and a timely reminder to all of us to not screw up this little planet we find ourselves on. For a film of this type, it does an admirable enough job of throwing spanners into the works, but there’s never any real threat that everything isn’t going to turn out perfectly. Lacey is as watchable as ever, the surrounding cast are fine – it is getting a little tiresome watching Lacey fall in love with all of these different archetypal ideal men, but that’s probably why we only ever watch one or two of these vehicles each Christmas. It goes for that same charming gentle romance and humour that all these movies go for – if this were a British comedy, you know the lead male love interest would be somewhat more foppish, and you know that at some point Lacey would have to stumble backwards and fall into an elephant’s water trough. Thankfully she, and we, are spared such indignities. If you’re looking for something slightly different in look and location from Lacey’s standard festive movies, give it a shot.

Let us know in the comments what you think of Love On Safari!