The category continues to be divided into two, with the official winners being The Godfather Part II and The Great Gatsby. After the mess surrounding the score and snub for The Godfather, there was only one winner here. In truth the score isn’t all that different from Part I but it’s still strong enough to be the choice. Jerry Goldsmith’s Chinatown is the only other potential, a woozy score with plenty of wistful moments, a score which on its own evokes Marlowe imagery, lonely PIs and boozed up dames, and maybe the odd footchase through a dark alley.

The Murder On The Orient Express soundtrack always reminded me of a score from decades earlier, albeit done with better production values – it’s classy, has sudden dramatic outbursts, and the necessary touches of glamour and romance. Shanks isn’t about a series of prison stabbings – it’s somehow worse. It’s amusing that a movie about a killer doll gets nominated for an Oscar. Well, not quite, but it is about a puppeteer played by Marcel Marceau who, with the help of an evil doctor, can control the dead. How William Castle got Alex North to work on this I don’t know, possibly via the use of an evil doctor and puppeteer, but it’s an Oscar Nomination for a horror movie so I can’t complain. It actually isn’t that bad a film – lent authenticity by Marceau’s performance and North’s wispy stop-start score – you can imagine the notes being pulled up and down by the invisible hands of a puppeteer.

The Towering Inferno is, I always forget, another score by John Williams. Even before he made all the soundtracks you love he was knocking it out of the park. If anything, this one actually reminds me of Star Trek – there’s that sense of ambition and exploration and scope in the music. Not a lot of memorable cues though. The Great Gatsby… not a book or an adaptation or a period of time and place I’ve ever really enjoyed so I’m usually biased against such things. Thankfully the score doesn’t go too far down the sound of the period that I don’t like, but still… The Little Prince is a strange one – an unsuccessful musical with a good cast. In theory it sounds like a musical version of the story could work, and that’s coming from someone who hates musicals, but this one doesn’t work. Most of the songs are annoying and the music is forgettable – it’s not a patch on the 2015 version. Finally, Phantom Of Paradise is the weirdest one of the lot – another musical, or maybe more accurately a Rock Opera with horror elements, directed by Brian De Palma. The rock opera movie would have a more successful release the following year, but this one has its moments, possibly let down by the lack of known performers. It’s a film about a disfigured rock star who seeks revenge against an evil producer who steals all his work and gets rich. A number of the songs are good, the overall score is consistent, though none of it became a hit and the film wasn’t a huge success. 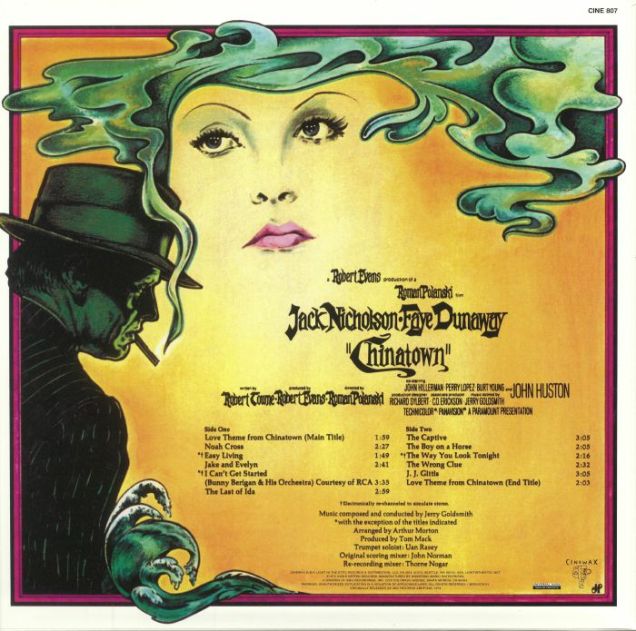 Three of the official choices make it to my list – you should know by now my choices tend to be somewhat more eclectic.

Black Christmas has a pretty unnerving and chilling soundtrack, filled with moans and creaking and wind howls along with twist on Christmas classics. Foxy Brown on the other hand is just good, solid, sexy fun by the great Willie Hutch. John Williams was just starting to hit his stride in the early-mid 70s, as you’ll see from this list and pretty much every subsequent year. Both Earthquake and The Towering Inferno have decent central themes and much to love and quite a few similarities. Elsewhere, he also collaborated with the little known Senor Spielbergo on The Sugarland Express – a weird one which has too much wailing harmonica and not enough of the good stuff – strings, building brass, hooks, yet is great when it works.

David Shire’s The Taking Of Pelham 123 feels like a disaster score, which I suppose is apt. It’s suitably chaotic, the lead ba-dum-da-dum brass pulsating and pounding. Finally, we’ve got to have The Texas Chainsaw Massacre soundtrack (Wayne Bell and Tobe Hooper) – perhaps more than any other main theme this year does it catch in your memory. Those screeching, ‘whatever they ares’ in the intro remain horrifying now, setting up a truly unique and nightmarish film – you watch and hear the opening, and you know you’re in trouble. Aside from that there is booming distortion, clashing cymbals, and other anti-music just off-putting enough to create an unequaled atmosphere.

Blazing Saddles, Young Frankenstein, Dark Star. I was going to pick The Godfather Part 2, but lets not.

Let us know which score gets your vote!

Coppola was a busy boy this year, with The Conversation and The Godfather Part II. He also wrote the screenplay for The Great Gatsby. While his entry here could have won another year, it’s up against Chinatown – one of the greatest screenplays ever written. Day For Night gets the vote for trying, successfully, something different, while Alice Doesn’t Live Here Anymore is one of the great examples of the new feminist movement. Harry And Tonto is charming enough, but not on par with the others.

My Nominations: Chinatown. Alice Doesn’t Live Here Anymore. Day For Night. The Conversation. Blazing Saddles. Bring Me The Head Of Alfredo Garcia. Dark Star. A Woman Under The Influence. Thunderbolt And Lightfoot.

We only drop Harry And Tonto and add Blazing Saddles in its place for planting 1970 US speak into the Old West and being filled with the lewd, the satirical, the juvenile, and more. Bring Me The Head Of Alfredo Garcia is a violent and often confused mystery peppered with a variety of grim characters while Dark Star makes a mockery of 2001. A Woman Under The Influence is a gritt, almost overwhelming character study, while Thunderbolt And Lightfoot is a shining example of a genre which would quickly be lampooned as the decade drew to a close and beyond.

Let us know which film you pick as winner!