Two clear nominations this year, and one obvious winner. While Marooned isn’t the quantum leap in quality that the previous year’s 2001 was, it mimicked that movie’s approach to realism with its effects. Krakatoa is an effects bonanza and due to the age of the movie it simply doesn’t hold up today – however the technical wizardry and ambition are deserving of the nomination.

My Nominations: On Her Majesty’s Secret Service. Where Eagles Dare. The Valley Of Gwangi. Marooned. Doppleganger.

Only the official winner makes it over to my list, joining a few other interesting choices. Both Where Eagles Dare and On Her Majesty’s Secret Service are action packed and therefore are filled with a variety of explosions and other more visual effects to make the action all the more realistic, while The Valley Of Gwangi is another Ray Harryhausen special, though this one is rarely discussed. Finally, Doppleganger (also known as Journey To The Far Side Of The Sun) sees some further realistic space and rocket effects from the team behind Thunderbirds.

Let us know which film of 1969 you feel has the Best Visual Effects!

Not a very exciting this year, I’m afraid!

What is your pick for Best Visual Effects of 1966? Let us know in the comments!

While not necessarily and landmark year for visual effects, the 2 official nominations show advancement of the field and hold scenes which are still outstanding today. For the flight mechanics, merging of animations and other pieces, Peter Ellenshaw, Hamilton Luske, and Eustace Lycette won the award for Mary Poppins. As much as Mary Poppins did for visual effects, The 7 Faces Of Dr. Lao blows the competition out of the water. The invention on display is superb, but it is the variety of effects which cement this as my winner. On a much lesser budget than Disne’ys extravaganza, Jim Danforth’s exemplery stop motion work reflects the crazed mind of an escaped, under-your-bed lunatic. The work forshadows later films such as Clash Of The Titans, but the wizardry here is exquisite.

Added to my nominations come three films of varying effects bonanza-ing. Goldfinger arguably begins the love affair between Bond and gadgets, M vs G has a number of catastrophic fights between the Titans, while 633 Squadron features realistic air battles. It seems odd to me that any of these 3 films were left out of the official nominations.

Who is your pick for the best visual effects of 1964? Let us know in the comments!

Two entirely different films with two entirely different approaches to effects were nominated this year. Cleopatra’s epic scope in every facet of film-making means that Special Effects were also considered, with Emil Kosa Junior picking up the official win for some terrific matte work. Aside from these shots which show things like Cleopatra’s arrival in Alexandria and breath life into the epic, there actually isn’t a lot else to speak of. The Birds also has a number of famous matte shots, but a number of nice transitions that you wouldn’t normally notice during watching because they are so smooth. I can mention a number of scenes from the movie, such as the birds arranging on the climbing frame which are a mixture of effects and expert animal handling. Shots like the birds hovering above such scenes as the gas station explosion, the swooping attack on the school kids, and Tippi’s attack in the attic were a mixture of animatronics, trained birds, rotoscoping, and matte work – all superb from Albert Whitlock and Ub Iwerks.

My Winner: The Birds.

My Nominations: The Birds. From Russia With Love. The Great Escape. Jason And The Argonauts. X: The Man With The XRay Eyes.

Only The Birds makes it over to my nominations, but it is joined with a couple of true innovators, and a couple of action movie classics. Both The Great Escape and From Russia With Love feature a wide array of action set pieces which required both potent stunt work and detailed special effects, with explosions and chases galore. Corman’s X was on made on a shoestring but is an inventive little thriller with some wonderful effects – from the seedy see-through clothes vision to Milland’s ‘eyes’ to the Spectarama colours and blurring, it’s a treat for effects purists. My clear winner though is Ray Harryhausen for his glorious work on Jason And The Argonauts. His assorted creations are given breath as they stalk the characters and terrify the audience, blending seamlessly in to the real life scenery. The first time you see Talos emerge, and the first time you experience the skeleton warrior attack are moments which will stay with you forever.

My Winner: Jason And The Argonauts. 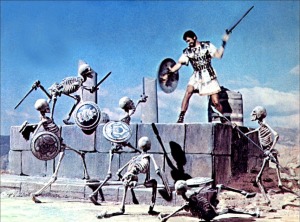 Let us know your pick for the best Special Effects of 1963 in the comments!

Actual Nominations: The Longest Day. Mutiny On The Bounty.

Only two films were nominated this year, with Robert MacDonand and Jacques Maumont winning for The Longest Day, a film where realism was key. Mutiny has plenty of sea-faring escapades, but the sheer scope and variety of effects earns The Longest Day my vote.

My Winner: The Longest Day

My Nominations: The Longest Day. Mutiny On The Bounty. The Day Of The Triffids. Dr.No. King Kong Vs Godzilla. Brothers Grimm.

I copy over the 2 actual nominees and had a host of other films which missed out. Dr No gets an obvious vote due to a myriad of well-executed traditional effects, while my remaining three choices are a little more outlandish in their efforts. King Kong Vs Godzilla is one of the most successful in the Godzilla series, thanks largely to some stunning set pieces which are still highly regarded today (the Octopus attack in particular). The Wonderful World Of The Brothers Grimm is a marvel for effects and make-up fans. The Day Of The Triffids may look dated now but somehow the effects still work well enough to make the film’s scares effective.

My Winner: King Kong Vs Godzilla

Clearly a quiet year then for this category according to The Academy. We know that isn’t true though. My winner here is GOFN.

My Nominations: Guns Of Navarone. The Absent Minded Professor. Atlantis. The Day The Earth Caught Fire, Mothra. The Pit And The Pendulum.

My Winner: The Day The Earth Caught Fire

My pick goes to the superb The Day The Earth Caught Fire and Les Bowie. Due to the mix of matte paintings, crumbling effects, post nuke imagery and orange-o-vision, the film retains a unique vision.

Let me know your thoughts? Did I miss out on some effects extravaganza!?