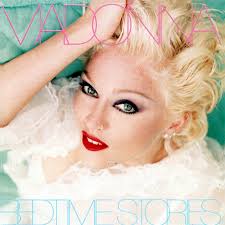 Greetings, Glancers! The last time we spoke of Madonna, she had released her most controversial and sexually charged album to date – Erotica. It was fine, and while I loved many of the ideas, most of the music didn’t make my nuts tingle. With Bedtime Stories, Madonna wanted to remind fans and the population at large that she wasn’t merely some orgasmic vixen but that she had other layers and furrows – like we all have. As you would expect, the album was yet another major success and proceeded to break new ground for Madonna while influencing later artists. But what do I think of it? Looking at the track list I see the album garnered four singles, though only one of them I can remember from the name; I’m sure once I hear some of the others I will remember them too. As always, listen along, weep at my thoughts, and drop your comments below!

‘Survivor‘. Beeps. Drum sounds. Voices. I don’t think I’ve heard this, but it’s very 90s RnB. Different sound from anything she had so far. It’s quite plain and tame actually. I don’t think the melodies would lodge in my head.

‘Secret‘. Guitar. Noise. Vocals. Better melodies. I was about to type that I don’t recall this, but the chorus sounds familiar, pretty sure I have heard that piece at least. I do like the different direction of sound, but neither of these two songs are emotional or melodic enough to grab me on first listen.

‘I’d Rather Be Your Lover‘. Portishead. Falls apart at vocals. Better in verses. Sexy without being as obvious as the last album. It doesn’t make the melodic impact again. Disaster rap. As I mentioned earlier, I didn’t recognise many of the song names, possibly that’s because the album didn’t have any obvious hits that I would remember 20 years after the fact – and we tend to most readily remember songs with melodies which have an impact.

‘Don’t Stop‘. 90s RnB pop beats. Oh dear. Terrible lyrics. No, absolutely awful lyrics. This one is trying to be sexy, I think, but it’s juvenile and clueless. Nothing positive to say about this one I’m afraid. There’s about 100 seconds of material here, yet the song is almost five minutes long. Sort it out.

‘Inside Of Me‘. Sex breath. Let your mind conjure some images from that phrase. At least this one feels sexy. A strange girly voice. Better melodies. Lyrics don’t appear to be about sex, more about sadness and hope. This is the best song yet, though that isn’t saying much. Still, it’s another good Madonna song that I wasn’t aware of.

‘Human Nature‘. Screeching RnB. Express yourself, don’t repress yourself. Yes, but more importantly – don’t be a dick about it. Sweary lyrics. Another new voice. A reaction to the public reaction to her last album? Or related to some relationship? So, good lyrics, silly music, melodies of no consequence.

‘Forbidden Love‘. More slow, smooth beats. Even though I don’t like a lot of these songs, the Production is always right on the money for the period. It’s another case of bland versus followed by a marginally better chorus. She sings with a more traditional Madonna voice this time around. The first part of the chorus hints at something great, but it fizzles out. This is one of the better songs on the album so far.

‘Love Tried To Welcome Me‘. Hiss. Strings. Good? Guitar. Jangles. Promising. Smooth RnBeats. I feel like this would have had more impact if it had a different production or backing music. It’s already stripped back, but those beats don’t really work. This one is quite sad, quite good, and the chorus is fine. Doesn’t reach the heights. Feels like a good one for a rainy day window view.

‘Sanctuary‘. Words. Familiar melody. More beats. Odd pipes. Bass. Quite unusual, though quite nice. Mysterious. A lot of songs on the album don’t feel like Madonna songs, maybe because these are not straightforward, simple pop songs like we are used to. More spoken words. The melodies are a little repetitive here, but still hypnotic.

‘Bedtime Story’. Throb sounds. Sex sounds. Portishead again. More threatening tone. Back beat. Feels like a centerpiece. There’s the dated beats. It does feel sort of dreamy in a warm, sultry, heroin snuggly way. It’s all monotone though. I don’t mind this one, has the shadows, has the nice dark tone I love for night driving with the warm air grooving, or drifting off to sleep in a daze.

‘Take A Bow’. Ah, I know this one. It’s quite sweet. It feels like a tacked on song to the end of a darker album. Still it ends up being a highlight for me. It’s quite funny how different this is in tone from everything else. I like this one – I can’t see it changing anyone’s world, but there is an innocence, a Michael Jackson vibe, and easy hooks.

Looking at the cover art and with the backlash from her previous album I was expecting this to be a more mainstream, melodic, pop-based affair, but that couldn’t be further from the truth. This is a dance album, ‘bedtime’ simply means sex, and none of the songs really work as obvious singles, outside of the final track. Credit for continuing to experiment and try different things but it’s not to my tastes. Most of the songs are too… empty? There isn’t any emotion or enough variance – experiment all you want, but you still need something to pull people in and keep them. The album was a success so clearly I’m in the minority. Since when has anyone listened to me anyway?

Let us know in the comments what you thought of Bedtime Stories. Is this one of Madonna’s best, or are you a n’fan (not a fan)? Next up it’s ah… it’s Evita. Don’t cry for me, but I really don’t know much about the music from it, aside from the pun I just made. I think I’ll listen only to the actual songs, not the other guff that is probably included too. Adios!