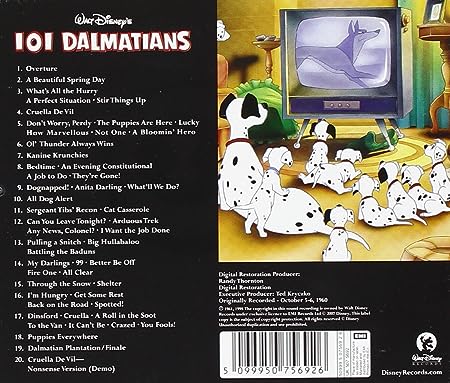 Greetings, Glancers! This should be a short and sweet one for a change, as 101 Dalmatians isn’t exactly known for its music. It does still have a pretty famous song though, after one of its central characters. The film only has two other, brief, songs, and three were cut from the final movie. Hopefully I can find those. Lets get on with it.

‘Cruella De Vil’ is maybe the most famous song with a character’s name for its title. It’s short, it feels creepy for younger kids, and it is apt for one of the company’s more horrific creations. You’ll find it on any Disney Greatest Hits album, deservedly so.

‘Kanine Krunchies Jingle’ is a brief repetitive jingle – it shouldn’t really be classed as a song. It’s only a few seconds long, an advertisement heard in the background.

‘Dalmatian Plantation’ is another short one – it’s barely a song, more like an off the cuff idea the likes of which we all come up with in the shower. You won’t remember it.

‘Don’t Buy A Parrot From A Sailor’ is the first song cut from the movie. It’s a new one on me. It’s a bit Cockney, giving it the feel of a sitcom intro. Or something Ringo would have done. It also sounds a bit like The Family Ness theme song. It’s not very good, but at least it’s a legit complete song.

‘Cheerio goodbye toodle loo hip hip’ is another new one. It’s swift, brief, and silly. It’s the sort of quick song with a simple enough melody that you can imagine it fitting in well with the film and have idiots like me singing it on the train.

‘March of the one hundred and one’ is another very short one which commits one of the cardinal sins of music, by having kids sing. There’s not a lot to it and the melody is uneventful.

There you have it, told ya it would be quick. Do you have any favourites from this movie? Let us know in the comments!