This week, one of the longest running loves of my life comes to an end. Neighbours has been selling me the ups and downs of Australia’s favourite suburb since I was the size of a shoe, and while I remember very little of those early episodes, once we reached the late 80s it was a regular daily fixture in my life as I fell for the antics of its buxom, sun-kissed stars.

While Neighbours has regularly traded in nostalgia, bringing back old characters, constantly referencing Miss Mangle, or holding one off celebratory episodes with many knowing nods to the past, these past few years have felt like a drawn out, bittersweet goodbye; a summation of everything which came before, careening towards an end nobody seems to want. From the return of Dee Bliss to various original stars making their ways back into the main cast, and into this final week of celebrations, us fans have been reminiscing. We’ve been looking back with misty eyes, we’ve been excitedly trawling the web for rumours on which big stars would be making a comeback and how the stories could possibly wrap up, and we’ve been wondering what the hell we’re going to do with this extra 30 minutes in our schedule. The dream for an eccentric billionaire fan to come in and save the show has failed. I still firmly believe that the show will return in a few years time, with a new and sexy lick of paint, one which will piss off old fans and not engage new viewers and inevitably fail. Until then, in my own childish fashion, I’ve been remembering the good times, those moments we’ll never forget, in AI form.

Remember when Harold and Madge went for a walk and Harold fell into the sea? Remember Madge’s gravelly wailing? Remember Harold being off our screens for years, only to return as the Salvation Army’s premier Amnesiac? This should jog your memory.

Everyone remembers when Kerry Mangle got shot while playing Duck Hunt on the Australian version of the Nintendo Entertainment System. As everyone knows, Australia is more dangerous than everywhere else and the Australian version involved running through a swamp being rifled down by the Oz equivalent of the Tory Party. Or something, I don’t remember it much. I do remember Cody Willis being shot in her own home though. I remember because she was my favourite character at the time. It was sad. I was sad. Trigger warning for any other Cody fans. Actually, the app seems to be somewhat confused by who Cody Willis is. Or what Neighbours is.

Arguably the most famous moment in the history of the show, it was one of those rare soap weddings where everything went right; nobody ran screaming from the altar, a jilted ex didn’t show up to say they’d been having an affair with one of the betrothed, nobody was exploded by a barbeque. The only tears were of happiness, and below’s image will surely make you shed a few more of those, even though the bride has apparently lost a hand and is posing alongside a fan with a deformed peanut for a head.

TOADIE AND DEE DRIVING OFF A CLIFF

Toadie and Dee’s blossoming relationship and nuptials was one of the stories I was deeply invested in back in the day. Toadie was everyone’s favourite loser turned hero even back then, and seeing him winning the attention of the hottest woman on the street was something the rest of us nerds could get behind. Unfortunately, inevitably, reality would strike and Toadie and Dee went soaring off the side of a cliff into the ocean, leaving Toadie a widower (for the first time) and the fans bereaved of one of our favourite couples. Relive those traumatic events below.

HELEN DIES IN HER SLEEP

Even more than Miss Mangle and Madge, Helen Daniels was the first and last true matriarch of the street, the legendary Anne Haddy struggling with real life health issues as she filmed her final scenes. I don’t want to suggest that it was living with Julie and Debbie Martin which finished Helen off, but few could survive more than a few weeks of that pair without lasting scars. Even Hannah cut her hair afterwards in an attempt to reinvent herself. She was one of the few characters to get her own special end credits. Will the AI be respectful in honouring her memory?

It was the slap which chilled the testicles of every hot-blooded male across the land, a slap that said ‘if I catch you with your pants down I’ll make sure you won’t feel your jaw till the next ice age’. Karl and Susan have had more affairs over the years than I’ve had Blog views, but this was the one which garnered the most attention, with Karl bending over backwards to avoid being caught for bending Sarah over forwards. The AI app has deigned to present some Anne Robinson lookalikes and a selection of random shots of random other soaps.

Keeping it Kennedy (kind of) for now, Drew and Libby were another favourite couple of mine. Libby was my favourite Neighbours character and, lets be honest, nobody was going to be good enough for her, but Drew came pretty damn close. He was handsome, stalwart, true, and good with his hands (matron), which meant he liked to tinker with cars. Because he liked tinkering with cars, he liked to drive and race cars, and this unfortunately led to one of the more amusing stunts in the show’s history as Drew’s car sailed skyward. He survived, no worries, mate. As much as I have Googled for this event, I can’t find anything about it, so maybe it never even happened. Here’s how it looks in my dreams.

Not happy with one near death experience, Mr Kirk needed to finish the deed. And so, he and Libby headed off to Oakey (read: The Wild West) and within seconds Drew was flung from a horse in one of the more amusing, least impressive stunts in the show’s history. What looked like it would have tickled a toddler in fact did catastrophic damage to Drew’s innards, and he succumbed to his injury’s shortly after. It’s like football – the most innocuous tackles always lead to season-long injuries. Here’s a picture of their fateful meeting.

DREW IS A ZOMBIE

Neighbours rarely took itself too seriously over the years, and frequently featured cast members coming back from the dead as ghosts, long lost twins, or Christmas decorations. They went one further and had an entire spin-off online series called Neighbours Vs Zombies in which many old and new favourites were gobbled by hordes of the undead (read West Waratah residents). Drew was one of the characters to be resurrected, and the poor fella didn’t even know he’d been dead.

Stingray was a breath of fresh air in a time of transition for the show, a time when old families were being written out. He was the new burst of comedy and action the show needed, bringing a monkey sack of new and inexplicable catchphrases to Erinsborough. After a series of tragedies he became dependent on booze and everything came to a head when he kidnapped his Ex’s baby, the new Kerry Mangle/Bishop/Timmins. He’s what our AI bot made of it all.

Not happy with simply having pretty ladies for the blokes to fawn over, the show has had its fair share of male goodness over the years, from Silver foxes like Lou Carpenter to rugged Dingo charmers like Joe Scully. Nothing could prepare the nether regions of the female populace for Drew, Toadie, Billy, Joel, and Karl whipped out the wee lads. For the sake of our eyes, I’m only posting the clean version of the AI’s artwork below.

We wrap up this post, and a huge chapter in our lives with the most icomic shot of them all. That of the Ramsey street sign. Roxy may have nicked it recently when she headed off with Kyle for her happy ending, but the sign lives on in our hearts. Here is is, for one last time, accurately drawn up by our soon to be AI Overlords. Thanks Neighbours. Theighbours. 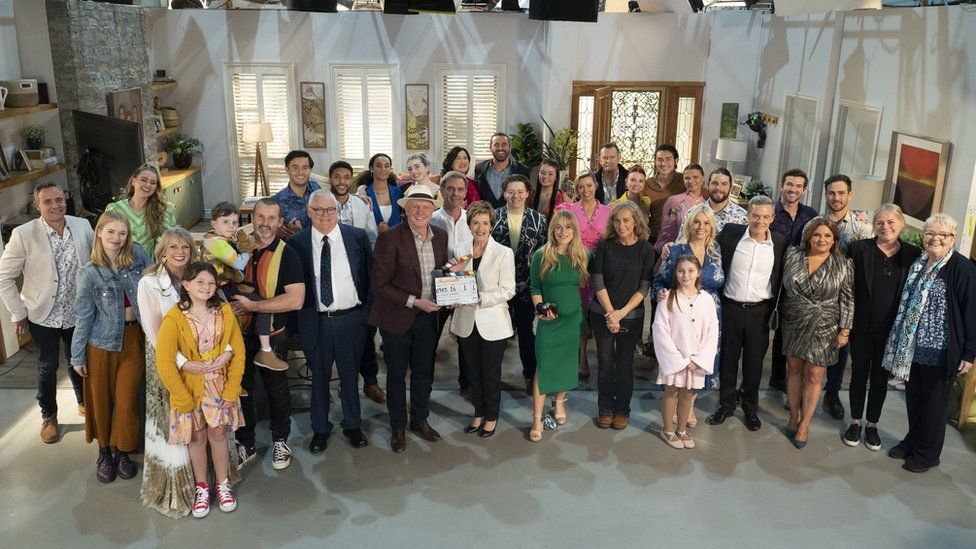