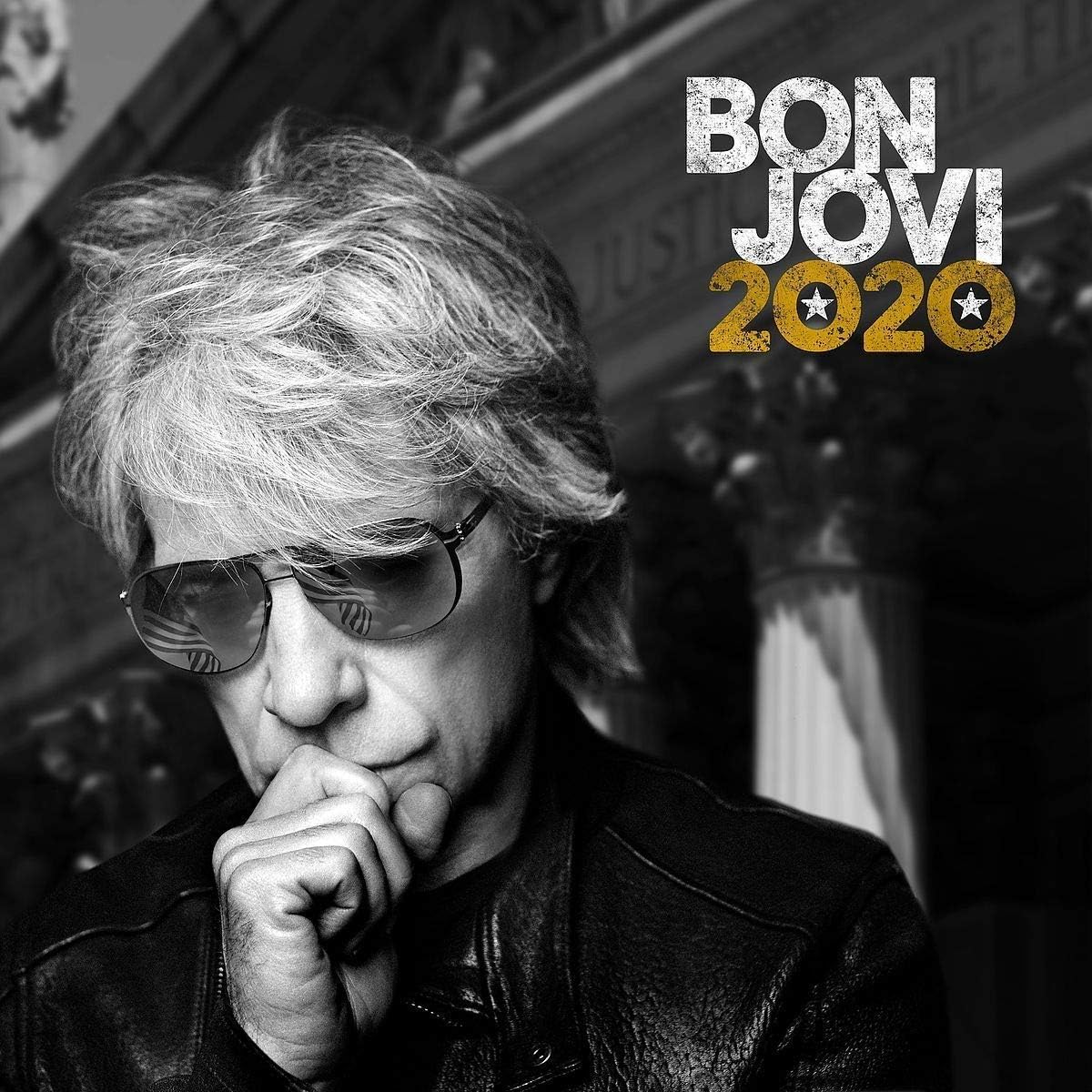 Greetings, Glancers! This is it. We’re in the future (past… or present) and have caught up to Bon Jovi’s most recent release 2020. I’m listening to this for the first time in 2021, so hopefully I’ll actually post this before the band’s next album comes out. It’s been a journey. I’ll continue to give my thoughts on any new albums the guys do make, and I have the small matter of briefly going through the bands B-Sides and Rarities to come. Before then though, we have to talk about 2020. I don’t know a single thing about it beyond the unusual choice of having the artwork focus solely on Jon. Interesting to cut the rest of the band out. Interesting that he kind of looks like Iggy Pop having swallowed a fly in the middle of a news interview. For possibly the last time then, lets do this.

‘Limitless‘ doesn’t exactly blast out of the speakers, but it’s a clear single. We’re in firm classic Bon Jovi territory with ‘woo-oohs’, and grainy vocals. It lacks the punch of their 80s beasts or the subtlety of their best 90s work, and as such comes across as just another middle of the road BJ song. The production is glossy and lacks the vocal and musical issues of much of the album – though Jon’s voice here still sounds like it’s had too much tinkering. Lyrically, the song, and the album, is all about hanging on, dealing with and overcoming struggles both personal and global, but it’s less on the nose here.

‘Do What You Can’ is the first of several heavily patriotic songs on the album. Not necessarily patriotic in the ‘God Bless The USA (and her guns)’ sense, but more in the universal, humanist way. It’s a message of togetherness in the midst of the pandemic and the lyric ‘when you can’t do what you do, do what you can’ just about works. The other mentions of PPE, social distancing, and other Pandemic speak already sound dated and out of place in a bouncy pop song. It’s cheery and hopeful and fans will lap it up, but it’s too far into cheese territory to convert anyone else.

‘American Reckoning‘ deals with the many protests which have spread across the US in recent years – racial hatred, gun attacks, the abuse of power by those who are supposed to protect the innocent. It’s certainly touching and sweet, it would have been provocative if it came from an artist with more mass popularity than Bon Jovi have now, and the lyrics work well. But Jon’s voice is all over the place – at best he sounds like he’s singing while eating, and this warbling does lessen the impact and enjoyment of the song. The main guitar melody is very similar to that bit at the end of Every Breath You Take.

‘Beautiful Drug‘ continues a decent run of easy, relaxed hits. The lyrics once again have the subtlety of a pig on a spit at a Vegan convention, but the ‘ooh ooh’ hooks should be enough to please the existing fans. It’s not quite a carbon copy of Limitless, but it feels like more of the same.

‘Story Of Love‘ is very sweet. Saccharine. It’s a song about family, love for sons and daughters, but it’s ooh so sickly. I’m sure he means it, but the Cliff Richard Mistletoe & Wine swaying and swooning rhythms, the strings and piano, they’re all too contrived to tug at the heartstrings. I’m sure the mums who were kids in the 80s when Jon was on their bedroom walls will be in floods of tears, but it tips over from genuine sentiment into cutesy bunnies and baby cuddles. The lyrics are actually poignant and well constructed.

‘Let It Rain’ is good old fashioned blue collar American defiance of the Springsteen/Jovi/bring it on we can do this style. It just lacks a bit of oomph to be considered one of their stronger anthems. Had this been written in the 80s, there would have been thicker guitars, a more prominent solo, and more focus swarming around the chorus, but melodically it’s one of the most memorable songs on the album.

‘Lower The Flag‘ is probably the emotional centrepiece of the album. While it’s far from the first song about gun violence in the US, it’s maybe one of the most significant to come from a band who probably have a large Conservative audience. That’s somewhat of a sweeping, problematic statement – many Democratic Party voters have firearms and many Conservatives would be in favour of greater gun controls, and Bon Jovi have a widespread fanbase across the nation and the world. But, a big 80s Rock band hitting their peak during the Reagan administration, a band who has never been obviously political but is very patriotic, it’s not a stretch to say a large whack of their US listeners lean Right. The song isn’t pushing a narrative or any opinion beyond ‘Jesus, there has been ANOTHER mass shooting, what the hell are we going to do about this?’. The lyrics are among Jon’s best, listing any number of towns which have been attacked, and pointing fingers at (essentially) everyone and the triviality of it, the routine of it; there’s a shooting, people die, others offer meaningless thoughts and prayers, some protest, the media makes it a talking point until the next shooting takes place and the cycle starts anew. Musically it does the job – somewhat sombre, not depressing or beating us over the head with sentiment. Good song, better lyric, though when nothing changed after Sandyhook, when all those wonderful children were killed, the US admitted it didn’t give a fuck and the rest of the world shook our heads in shame.

‘Blood In The Water’ is a suitably downbeat follow up, almost like that shame has seeped in and all that is left is a sorrowful man walking a hollow road. It feels like a song which could have fit on These Days, just that little touch of Cowboy, that sprinkling of class which dragged the band into a more mature period from their 80s Party days. The guitar and overall vibe is very Dry County, and I can only assume it was intentional but the intro synth and guitar and atmosphere is very similar to Dire Strait’s Brothers In Arms which, oh look, happens to be the name of the next track. Lyrically we’re on topic again with all of the media mass manipulation being equated to Satan. Sure, I get it, but at least we know one of those things exists, and is not some hoof-clad furry trident poker.

‘Brothers In Arms‘ has little or nothing in common with the aforementioned Dire Straits song – instead this is more like a shit-kicking rocker which they filled their early albums with, except with a slower pace and a more interesting collection of melodies. The chorus comes close to being a copy paste of Sleep When I’m Dead. It gets the band pumping again after a couple of darker songs – another likely fan-pleaser, but a solid, by the numbers song for the rest of us.

‘Unbroken‘ closes the album, another statement song, this time tackling the kids drafted into the military by choice or by ‘choice’. Another decade, another war in a foreign country, another generation of kids wiped out or jaded by its government’s ill-informed choices, another group led by a lie and uncovering truth and the aftermath of that truth. War, guys… war is not patriotic, war is not a thing to put on your CV, war is not a badge of honour, war is bodies, grief, horror, and stepping stone to a life of regret if you’re lucky enough to avoid an early grave. The song is a dedication to those kids, the ones who made it, the ones who did it, and while it does feel rousing and patriotic, and could be misread by any number of listeners, it’s still a poignant and thought-provoking way to close the album.

Bon Jovi have become a little more political (for lack of a better term) in their recent output, which could be nothing more than a by product of getting older and seeing the state of the world they’re passing on to the kids, or it could be a by product of the various cultural events which have struck the country and the world since 2001. This album is the most overt example, tackling global and localised hatred, US politics, the military, gun violence, climate change, the pandemic etc etc. Some of the early songs feel rushed and lack the lyrical nuance of the later tracks – it’s largely in the second half where we’re reminded the band has the ability to pen something meaningful which isn’t a silly love song. The album’s strength lies in those subtle moments, turning back the clock to a time when they could craft a slower, powerful song, while the more upbeat tracks are serviceable, probably work well in front of a crowd, but won’t be a substitute for their hits. Will this be the final Bon Jovi album? I think not, but for now we’re all caught up, beyond checking out their rarities. What did you think of 2020 – let us know in the comments!