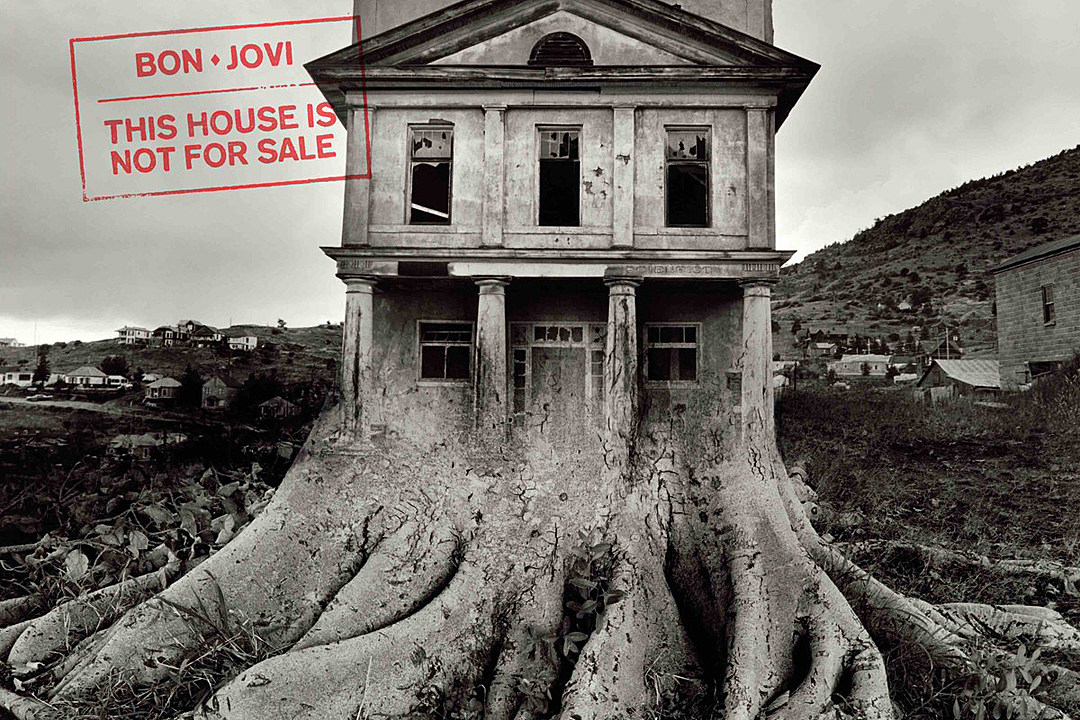 Greetings, Glancers! I seem like I say this every post, but we’re definitely getting towards the end of this Bon Jovi series. The only things I know about this album are thus; it has that creepy house from The Outer Limits as its cover, I keep thinking it’s a compilation (it’s not), and it’s the first album to not feature Ritchie ‘Hat Luvin’ Sambora. The things I don’t know about this album; everything else. Lets do this.

‘This House Is Not For Sale‘ is the opener, the title track, and was a single. Not a hugely successful one it seems, but that’s to be expected this deep into their career. Without Sambora, in these early moment it doesn’t seem like their sound has changed – similar tone and there are still backing vocals to fill the gap. It’s a bouncy pop rock song with a couple of hooks in the chorus. The verse is tame, but still catchy. A solid opener without excelling in any particular direction.

‘Living With The Ghost‘ fades in with a charging dash of guitar, piano, and drums. The verses have the feel of an anthem, hopefully building to a satisfying chorus. It’s not 100% satisfying, but it’s fine. I wish he’s gone for a higher not on ‘ghost’ to really reach for the more emotive sound. Plus, picking the higher note would have opened up the melody in the second chorus line to be less samey than the first. Mr X, if that is your real name, pulls out a simple enough solo before the song withdraws and the vocals take the lead for a quieter piano based section. They keep it gentle for a while before building up the volume for a final run at the chorus. Two fan-pleasing songs.

‘Knockout‘ is another single, feels more pulsating than the opener. It’s another return to the defiant ‘we can do this’ spirit of their early singles, using boxing imagery to get the point across. It’s another decent lighter rock song, with enough energy to bring in a varied audience. Good melodies and the backing vocals provide an extra hook.

‘Labor Of Love‘ immediately makes me think of Dark Shines by Muse, which is quite funny. It’s the same guitar tone, and obviously that relates back to Wicked Game. It’s a ballad, but with a little more energy. I’m not convinced by the vocal approach, but I can look it over. The vocals and song open up somewhat for the chorus. Yeah, it’s another good song. I would have picked different vocal and drum approach. Each of these songs so far I’d happily hear again, but I’m not sure any have the power to make my long term playlist.

‘Born Again Tomorrow‘ is another rallying call for people to live their lives and make the best decisions so that they won’t regret anything. It’s a pretty nifty song, with a little touch of dance synth in the background. It’s very much in the vein of their bigger songs and I feel like it would have been a hit if it was released at their peak. Big chorus, big verses, plenty of moments to sing along to, and a good solo to top it off.

‘Roller Coaster‘ is one of those terms which always finds its way into music – criticism and lyrics and song titles. This attempt at a roller coaster song begins well, steady beat and decent pace, quiet, good melodies. It builds and builds, and the chorus is a good one. I’m almost certain I’ve heard this melody in the chorus before, but I can’t place it. There is something odd going on with Jon’s vocals here, its throughout the album but it’s noticeable in the chorus – it sounds like he’s had a little work done post recording, just to even out any rough edges. This is a very catchy and sweet song, another which I think would have been more impactful in the mid 80s to early 90s.

‘New Year’s Day‘ continues the same tempo and uplifting feel as the previous track. Most of the album has been very positive in tone so far. Lots of songs touching on new beginnings, moving forwards, taking life’s turns. All the videos are cheesy as f*ck and it’s a little sad seeing how old the guys now look. Getting old sucks. Still, this feels like another hit though it’s very much a re-tread lyrically and musically of many of the previous songs.

‘The Devil’s In The Temple‘ opens with Physical Graffiti era chords before plunging into an optimistic slow tempo rock verse. The tempo has the vibe of a deeper urgency bubbling beneath the surface, as if a faster beat wants to unleash but is being held down. The song doesn’t really have a chorus – or at least the chorus feels more like a pre-chorus. There’s something enchanting but all over there is that sense of holding back – not restraint, but physically forcing something else back to stop it from erupting. I guess that is restraint. I think I would have preferred the eruption.

‘Scars On This Guitar‘ is surely a ballad with a name like that. Yes, acoustic guitar and piano. Singing about Friday nights again. It feels like we’ve been here before. Something weird going on with Jon’s vocals in the higher register moments. Look, we’ve heard them do songs like this before but it’s still good, inoffensive, and fans will surely lap it up. It could have been better for me with one simple change – when he sings ‘nowhere left to run to’, if he had gone for a higher note on the ‘to’ it would have peaked the emotion instead of leaving it as it currently stands – middle of the road emotion rather than yanking my soul out through my nostrils. It’s a lovely, gentle song for married couples everywhere.

‘God Bless This Mess‘ is… fine. I’m running out of platitudes or interesting things to say about these songs. You know by this point what you’re getting – it’s generally well written, it doesn’t have any edge but you can dance to it in a crowd, it has a pleasing enough chorus. There’s no blistering solo, not much in the way of harmonies, but if you’ve always been a Bon Jovi fan or if you’ve just discovered them through their bigger hits, you should like this to. If anyone else had recorded the song it would sink without a trace, but as it’s Bon Jovi it’ll find an audience – the audience it was designed to find.

‘Reunion‘ opens like a U2 song without the Edge’s delay effects. Another pleasant song. Good verse which builds neatly to another tame but catchy chorus. It’s wholesome, it’s hopeful. It looks back and looks forward. It’s one of those songs, and Bon Jovi are one of those bands who make me wish I had been an American teen in the 80s, falling in love, growing old together – the band has always had a way of making this feel so appealing and vital. It’s another winner for long time fans, for someone like me it’s another decent, average MOR rock song that I’ll have forgotten in a day’s time but wouldn’t complain if I were to hear it again.

‘Come On Up To Our House‘ is the closer. As much as I have enjoyed this album – or maybe as much as it hasn’t pissed me off – I’m still holding out hope for that one killer song from the band. Just out of nowhere, another Livin On A Prayer  or Always or Bed Of Roses. Maybe this is it. It’s clear within the first five seconds that it’s not this one. A sweet closer. Welcoming. Mid-slow tempo. Quiet and tame but nice. The musical equivalent of sitting with a sleeping cat on your lap and doing absolutely nothing while not being aware of the nothing you’re doing. It doesn’t feel like an album closer but it’s as good a song as any to complete this batch of songs.

Very much like the more recent Madonna albums I’ve listened to, I’m surprised by how much I have enjoyed these songs. None of them are life-changing, and while Madonna is still updating her sound somewhat, Bon Jovi are happy doing what they’ve always done – they’re a little softer, they don’t have has much energy, the passion has less edge, but the songs are still fun. This is another collection of big bouncy songs which longstanding Bon Jovi fans will lap up. There isn’t a lot of variance on the album – even between ballads and heavier tracks – they mostly follow a very familiar format but there are still enough hooks and melodies that most listeners should be pleased. In this era of manufactured guff and songs specifically designed to only be consumed by the youngest age brackets, it’s good to have easy nostalgic Rock music to fall back on, being made by the very people who we grew up with and who played the music of our own youth.

Let us know in the comments what you think of This House Is Not For Sale!