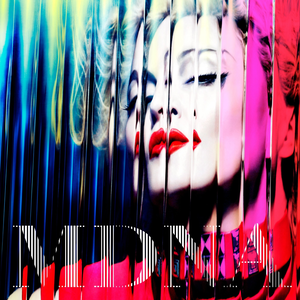 Greetings, Glancers! We’re up to our twelfth Madonna album and very close to catching up with what she’s up to now. I know absolutely zero about this album other than seeing that she worked with William Orbit again when I was trying to grab the track-listing. They’ve worked well before, so hopefully they struck gold again. Looking at the twelve songs, the name of the first sounds familiar but I don’t think I’ve actually heard it before – or any of the others. She seems to have a lot of collaborators in tow this time and I’m going to assume it’s another one designed for dancefloors. Lets do this.

‘Girl Gone Wild‘ opens with a spoken confession, spoken with a touch of satire. A familiar Noughties trance beat then drops forcefully before fading into the chorus. This type of music generally doesn’t need a strong vocalist, but definitely stands out more when the singer has vocal prowess. Madonna fluctuates between good and okay, rarely reaching any height but she’s always recognisable. By the time the chorus hits I’m certain I’ve never heard it. Maybe I was thinking of Alice Cooper’s Ghouls Gone Wild… This is a middling floor filler – I can see people dancing too this and it’s not too hard on the ears either. A decent opening song.

‘Gang Bang‘ starts in a scratchy, near industrial fashion before a clicky, dark beat hits. Madonna’s vocals are deep, monotone, and recall a certain Cher/Dusty song. I hope it’s building to something as on its own the monotone melody won’t do much. There’s a slight, I’m assuming chorus which repeats much of the verse but alleviates a little of the monotony by adding inflections to the melody. The music largely remains the same too, every so often a new beep or hoot or guitar or siren interrupting things. It does that beatdown thing in the middle that used to be all the rage – that fad almost never worked and it’s worse here because Madonna talks over it. It does feel angry and darker than she usually gets but it gets a little silly towards the end, but crucially that lack of melody stops it from being the sort of thing you’d want to listen to again.

‘I’m Addicted‘ keeps us on the dancefloor – this is working quite a lot like whichever that other dance concept album of her’s was. At least this one has a melody and the music is ripping all over the place. It’s not very good so far, but it’s not monotone. It’s an average pop/dance track more on the forgettable side and far from Madonna’s best work in this genre. I like how it’s cut together to sound like she keeps singing ‘I’m a dick’, but that probably wasn’t intentional.

‘Turn Up The Radio‘ starts with an almost 80s synth intro. Thankfully there’s a playful verse melody. The drum sounds are that terrible weak paper thin sound which makes you wonder why they bothered at all. They improve in the chorus and the melody there isn’t too bad. It’s just a slice of fluffy pop but better than the last couple.

‘Give Me All Your Luvin’ is one of those .feat tracks that has been stinking up the charts for the last five years or so. It’s cheap but catchy, the cheerleader refrain silly but works. It’s in the same vein as the previous song – uneventful, harmless fluff. I can’t see it making my playlist any time soon. Some silly super-fast rapping pops out of nowhere in the middle, followed by a slower section – neither really add anything to the song and they feel out of place, but they don’t hurt it either.

‘Some Girls‘ starts with some parping or vuvuzelas or something. More monotone singing – doesn’t bode well. This all feels like some of Michael Jackson’s less advisable experiments on Unbreakable. Then for a moment the vocals (hatefully) sound like Mel & Kim. It’s not great.

‘Superstar‘ is more like what I would have expected from a William Orbit/Madonna collab. Maybe he wasn’t even involved on this one. The drum beats are very weak – I still don’t understand why so many songs have this sort of beat especially when it’s a dance song. Aside from that I quite like the music. It’s another simple one which you could imagine being played with any basic stripped down instrumentation or heightened with  myriad of other sounds. It’s catchy, the lyrics are… I’m not sure if she’s being genuine or or if this mockery, but they veer between silly and pleasingly charming. Better.

‘I Don’t Give A‘ opens with a funky beat – better drum sounds than before. I think I heard the name of this one, but I definitely haven’t heard the song. She’s doing some sort of rapping in the verse, the chorus more traditional pop. She’s reached the point now where she has to parade this rebellion to the youth to get the sales from the younger crowd, and yet it still fits her persona. It sounds silly through 36 year old years – the Minaj part sounds even worse (who rhymes ‘business woman’ with ‘business woman’ twice) – but I imagine it works when your 15. It heads into an orchestra based chanting session towards the end which grows to epic proportions making me think Madonna should actually try something along those lines.

‘I’m A Sinner‘ sounds like a robot knocking at your door. At least the beats are better again and the melodies continue. This has an Orbit feel – must be the guitar. It’s not one of her best, but it’s fun enough pop that I can get behind it and it has enough creative spark and variety to help it stand out.

‘Love Spent‘ opens like furtive Western soundtrack and then the synth and beats drop. The verses have an 8-bit feel, good melodies which get better in the pre-chorus – again it’s a shame the drum sounds are shite again. Some lyrical callbacks to old songs. Good all round.

‘Masterpiece‘ is a title that begs to be ridiculed. Lets see. It’s starts out well – I love the main melody, simple and sad as it is. It’s lovely, and it too gets better in the pre-chorus. The chorus is good too. I wouldn’t call it a masterpiece, but it’s one of the best songs on the album.

‘Falling Free‘ starts with bending and tinkling piano, synth strings, and another simple lullaby melody. Not quite as nice as powerful as the last song but there’s more going on musically here. I like how clear the vocals are and how each line has some sort of different pause or instrumentation. The long extended outro… I think it would have worked better as the intro. A good closer.

The album gets stronger as it goes on, peaking with a strong closing set. The opening half feels like the dance half, with the second more contemplative and ballad based. While I always enjoy Madonna’s biggest pop tracks, her focus on the various dance genres rarely does much for me. Her ballads tend to be my favourites so I’m glad we had a few in that vein here. A hundred years into her career and she’s still troubling the current wave of pop stars, challenging them to up their game. I wish she would pander (or seem to) less to them and simply say ‘I’m at the top – it’s up to you to catch up’.

Let us know in the comments what you think of MDN!