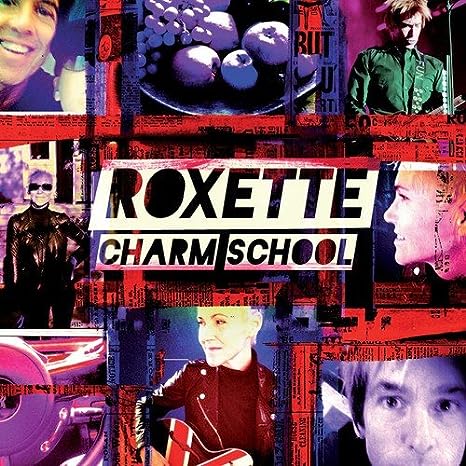 Greetings, Glancers! I’m fairly certain I’ve seen a Barbie movie called something like Charm School. That one where she’s Blair Willows. But that’s not why we’re here. We’re here to hear something we haven’t heard before, and by ‘we’ I mean ‘me’, and by ‘me’ I mean ‘I’. I haven’t heard any of this album before and in truth I don’t have high hopes. Charm School was the first album in ten years from Roxette, after the not so good Room Service. Marie had had a brain tumour you see, and that sort of thing gets in the way of, well, everything. But the band and Marie kept fighting and returned with another record. I have no idea what it’s like or what it’s about, but the best I’m hope for is one good single in the vein of their past greats – one song that I hear and can say ‘hey, that was actually pretty good’. Lets do this.

‘Way Out‘ starts out with some distant swirling before a laid back beat and acoustic guitar section starts. Per’s vocals should always take a back seat to Marie’s for me, but that’s me. It’s nice to hear that Roxette pop rock sound again, in this modern world of clipped melodies and auto-tuning. There’s some crisp guitar, some light melodies, and the chorus is as always the focal point. It’s not bad.

‘No One Makes It On Her Own‘ begins with Marie and piano. With a name like that, it’s easy to draw parallels with what she had been going through when gone from the public eye. Her vocals are still good, but is there some sort of mumble quality or lisp there now? Or is she struggling more with English? There’s definitely something a little different from before. Otherwise, this is very nice – a melody as simplistic as something like Imagine but honest and heartfelt. Two songs of varying B Grade quality.

‘She’s Got Nothing On (But The Radio)‘ opens with a funky beat and strange oozing distortion. Per leads again. The verse is guff, the chorus isn’t bad but too short versus the longer verse. The verse is C or D grade, the chorus B, the bridge B – whatever that works out for you. I’d call it the weakest song so far, but the most up-tempo.

‘Speak To Me‘ starts with one of those oriental sounding string instruments. More Per. A better melody and verse. The Marie comes in with a blast of a chorus – that’s a very Roxette chorus, very reminiscent of their heyday. It’s good. I get the impression that this one would act as a comeback anthem for diehards. It’s not challenging, just a reminder that they can still do the big emotive power pop thing when they choose to.

‘I’m Glad You Called‘ is slow acoustic guitars and the start. It’s Marie and that lisping mumbling quality is even more prominent here. It’s quite distracting, which is a shame because the music is quite lovely – no booming drums, but lots of string accompaniment and unusual vocal choices, even when Per joins. I think this could be really good with a more powerful vocalist in their prime, or Marie twenty years earlier.

‘Only When I Dream‘ kicks off with the big hook first, some fuzzing guitars and synth stuff alongside it. Per propels another decent atmospheric verse forwards before Marie joins. It keeps kicking on and building and then the chorus drops suddenly. It’s pretty good too, but those transitions are slightly too sudden – like there’s a few seconds just missing to connect the pieces and heighten the emotion and solidity. Still, it’s more compelling than most of what was on the last couple of albums and it actually feels like a return to form.

‘Dream On‘ opens with a nice acoustic flourish before trending towards an early Britpop sound – like James or one of those bands who were doing the Britpop thing before Blur and Oasis exploded. They’ve pulled way back on the experimental outbursts from the last album and are dedicating their focus on melody, which is a big plus for a band like this. Marie gets a quick hook in there too, followed by some harpsichord type jingling.

‘Big Black Cadillac‘ sounds like they’re going experimental again. There’s synth humming but at least it’s melody based again rather than just chucking in sounds for the sake of it. It’s more that they’ve said ‘instead of guitars, lets try this’. The verse is silly and bouncy, the chorus better. A little similar to some other songs on the album but not so overt as to make me discount it.

‘In My Own Way‘ is another slow one – arpeggio and Marie, singing more clearly now. Another good melody, more building in the background. We get the few seconds of space before the chorus. But is that the chorus or just another verse? That’s a shame as there is no clear and obvious standout chorus. The rest is good, though we probably didn’t need Per’s part.

‘After All‘ has another quirky Britpop approach. Feels like the start of a sitcom or a kids TV show. It’s fun and silly and nonchalant. This one feels like a sleeper single.

‘Happy On The Outside‘ has some brief synth beats and swirls which pull back to allow Marie’s vocals through. Atmospheric again, melody focused again. The chorus clearly owes a debt to Coldplay with the way the drums and piano jangle together, but the melodies remain strong. It all seems effortless, though the cynic in me could say they’re treading water and barely trying. I don’t think that’s the case – I think it’s more a case of them finding comfort in music again and re-introducing themselves to the world in the best way they know how.

‘Sitting On Top Of The World‘ has more synth sounds. Marie in the verse again and more decent verse. That plinky instrumental overlay reminds me of Michael Jackson’s Someone In The Dark from ET. It’s a strong ending, gentle, easy, clean, they’re not breaking any new ground but simply saying ‘hey, we haven’t been around for a while, but we’re back and we’re still doing that thing you like’.

Well, I got more than I asked for. Quite a few songs met my categorization of ‘pretty good’. When they stick to what I feel they are best at – emotive pop – then you know you’ll get some good stuff. When they try to branch out into different styles and approaches it tends to fall to pieces. Here the softer songs are stronger, the weaker tracks reserved more for the upbeat, up-tempo, more rock oriented songs. Also, it’s a consistent album – it doesn’t bounce from sound to sound and style to style, and it’s not bloated like some of their biggest released. As such, there are plenty of songs I’d gladly listen to again. I don’t think any of them come close to their absolute best, but a few drop into the same crowd as their second tier stuff. It definitely works as a comeback album, a reminder that they can still write crowd-pleasing anthems and emotional ballads. It would take sterner critic than me to complain about that, given the length of time they’ve been away and the circumstances surrounding their absence. If you like Roxette, or if at some point you’ve enjoyed their biggest hits, there will be something here to pull you in.

Let us know in the comments what you think of Charm School!

Nightman’s Playlist Picks: Speak To Me. No-One Makes It On Her Own. I’m Glad You Called. Only When I Dream. Dream On. After All. Happy On The Outside. Sitting On Top Of The World.