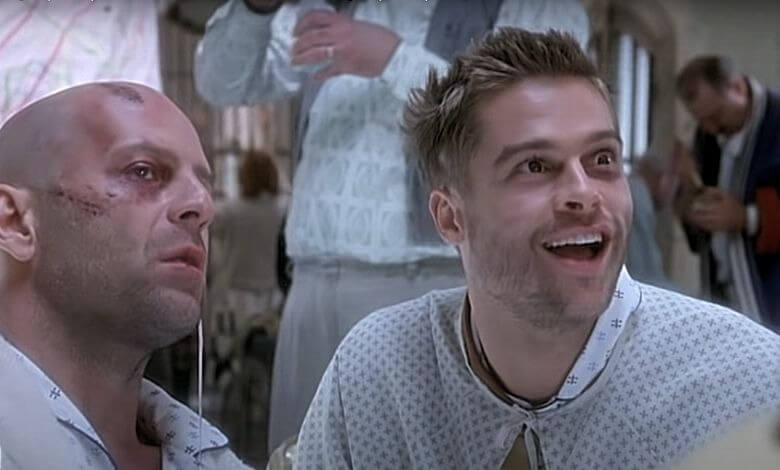 We’re coming in hot today, with the beloved by most 12 Monkeys, Terry Gilliam’s crazed tale of time travelling, airports, disease, and Brad Pitt’s hilarious attempts at acting. I have an amount of admiration for 12 Monkeys but a deeper look unravels what a shambles the plot is, and the twists are of the usual sort you find in time-travel movies. I came to the film late, spurred on by heaps of praise by people whose opinions usually mesh with my own. It’s good, but it’s not movie of the year good. If there’s any lesson here, it’s probably that your friends are dicks and you can’t trust their recommendations. BECAUSE THEY’RE A FUTURE VERSION OF YOU. But yeah, one of Brad Pitt’s early attempts at ‘big, real, acting’ following the much more interesting Kalifornia and Interview With The Vampire, are hilarious and I will never understand how he was nominated for any Award, never mind an Oscar.

I’m still not sure how you bring together 1995 Antonio Banderas, Sly Stallone, and give a Wachowski’s story about guns and killings and hitmen to Richard Donner, and make it a dull slog. It’s such a nothing story – the Wachowskis had clearly been watching a lot of John Woo movies and thought they could make their own take on homoerotic machismo (plus guns), but forgot to make it interesting, then everyone else involved didn’t bother giving it any style or attempt to flesh out the characters or assign any sense to whatever the hell was going on.

Another one of the post Pulp Fiction movies which every studio was pumping out between 1995 and 2000, but this one comes with some genuine cred, based on a story by Elmore Leonard. Cool cast too. I don’t know why ‘cool’ is equated to jazz in movies, when any music fan knows that jazz actually equates to ‘shit’, so we’re subjected to a shitty score, people in sunglasses, dialogue which feels as if the characters are ripping pages from a bad book of poetry and passing them to one another instead of speaking. It’s a hideous bore too, though every time I’ve seen it has been late at night when I’ve already been tired.

Haunted may be the most boring, sleep inducing movie of all time. There was a lot of it this year – it’s as if they knew Desperado and Goldeneye were coming out this year and thought ‘why bother’.

I get there’s a market for this sort of thing – lonely, middle aged housewives for example – and because I’m not one of those, Moonlight And Valentino was never going to do anything for me. It’s not even good enough for any awkward ‘look, it’s John Bon Jovi’ laughs. As with any other year, there were a number of equally unacceptable shitty rom coms/dramas/costume nonsese that I could have added in this spot – The Englishman Who Climbed A Hill, The Scarlet Letter, Sabrina, Miami Rhapsody etc, but this one commits the cardinal crime of being such an up itself story of unrealistic soap opera relationships that you can neither take it seriously, not laugh at it. Plus it has Gwyneth Paltrow.

I’m surprised this didn’t have Gwyneth Paltrow, but it does have Hugh Grant which is essentially the same thing. It’s a remake of a French film where the comedy simply doesn’t translate. The story is basically about your typical bloke, drifting along, happy with his life, career, relationship who knocks up his girlfriend and begins freaking out. The Simpsons did it better in a single episode. Not only does the humour not translate, there is no attempt to attune the humour in any way, Hugh Grant will never be funny (unless he’s attacking snake people), and like every movie of its ilk you know precisely how it’s going to end from the moment the opening credits run. It’s a shame, as this year had a few decent movies in this genre – While You Were Sleeping, Waiting To Exile….. and Showgirls.

To Wong Foo, Thanks For Everything Julie Newmar!

Another film where we have to whip out the checklist of things I don’t like; ridiculous name. Quirky camp comedy. Drag. Stockard Channing. Being tame. The only thing going for it are a few interesting cast choices and the fact that it’s a road movie, but those aren’t enough to save it.

Village Of The Damned

Carpenter was on the verge of checking out by this point. I feel like if he had achieved a hit with this, regardless of quality, he would have been more prolific throughout the rest of the decade and into the 2000s. To be fair, it had a lot of positives going in – unusual cast, the genre is precisely in Carpenter’s wheelhouse, and Carpenter has a track record of making good remakes. I would have loved Carpenter to have tackled a Bodysnatchers story, but Abel Ferrera got there first. Instead, he updates the 1960 British classic of the same name. Sadly it’s clear that Carpenter doesn’t give a shit – there’s none of his usual style or flair, the characters don’t feel like real people or even caricatures, and it’s dull. Even the Soundtrack doesn’t help. It does provide some darker twists which set it apart from the original, but it’s a disappoint on all fronts. It was a failure at the Box Office too, and so Carpenter stopped caring about movies.

Let us know in the comments what your least favourite movies of 1995 are!