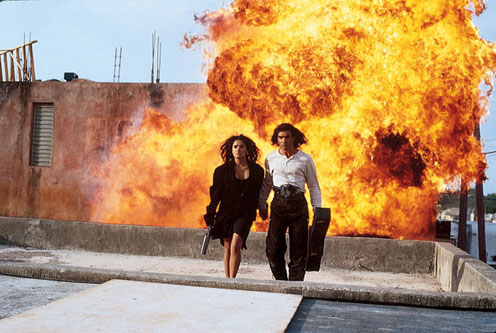 Lordy lordy, this is going to be a long one (that’s what she said etc). 1995 is just one of those years, both formative and just simply a bad-ass year for movies. As usual, my list is eclectic with both critical darlings, commercial hits, and lesser known or foreign curios. Enjoy!

This was the biggie of 1995, and a bit of a surprise, lifting Mel Gibson into the pantheon of Great Directors and showcasing his skills as a leading man. It’s not my favourite Gibson movie but it’s a sublime achievement with great, epic action scenes and famous speeches.

Casino always felt like a lesser Scorsese movie to me, the less popular younger brother to Goodfellas. As unfair as that is, I feel like it’s true. But it’s still Scorsese, and he’s still on fire, so there are very few other directors who can touch him when he’s delivering.

Casper is better than Casino! Well no, but I enjoy it more. It’s a great lead in to Horror for kids, it feels like a mini Tim Burton movie – with a little more darkness and satire this could have been a bona fide classic. It’s Christina Ricci, so I’m in regardless, but you also get Bill Pullman and Eric Idle for some reason.

Jumanji is that bona fide classic family movie blockbuster – the effects for the time were great, the idea was fun, and Robin Williams and Kirsten Dunst are on top form. I’m not a Joe Johnston fan – three of his movies appear on my Least Favourites lists – but this is his finest moment, mixing the story, characters, and effects seamlessly. In truth, I was always a bigger fan of the Animated TV show, but the movie is a lot of fun.

It’s a stereotype now – the teacher coming in to some tough inner-city school, and turning them around thanks to a passion for (literature/art/music/dance/anything) some subject. Variants of this had been going on for decades, but this really perfected the thing. It didn’t hurt that Gangsta’s Paradise was released alongside the movie and became a worldwide smash. Great cast, great energy, and while these types of movie feel a little White Saviour-ish, I can’t help but enjoy these types of film.

Before Bigelow became a genuine A-Lister with The Hurt Locker, she was making much more interesting high (or low) concept movies like this. This was quite revelatory in 1995 and quite a lot of the ideas and technology displayed are in regular use today. Like Near Dark, this is a gorgeous night time shot movie, albeit this one is much more focused on the indoors rather than the outdoors. Out of all of the movies on my list, this is maybe the least seen (it was a massive bomb); it stars Ralph Fiennes as a former cop/now criminal in a futuristic end of the century LA who buys and sells people’s memories (there’s a device which can record these) and who gets pulled into a wider story of love, crime, and murder. Throw in an archetypal Juliette Lewis performance, Angela Bassett, Tom Sizemore, and the always great Michael Wincott, a great mid-nineties indie/rock/techno, and at the very least you have an interesting (if cold) movie well deserving of re-evaluation.

14: In The Mouth Of Madness (US) John Carpenter

One of the last John Carpenter movies I ever got to because it’s so damn hard to find a physical copy of, In The Mouth Of Madness is one of the last great Carpenter movies. I don’t love it as much as some, but that may just be because I’m not as familiar with it. It’s unusual for Carpenter in that it’s not so straightforward – it’s a natural thematic successor to Prince Of Darkness and features a deliciously madcap Sam Neill performance as an Insurance Investigator sucked into, well, the mouth of madness. Charlton Heston pops up too. It’s very strange – there are good effects, good ideas, and Carpenter is as assured as ever, but it doesn’t always flow in a pleasing way (which may be deliberate) and the script feels lacking. But it’s still Carpenter doing Horror, and that will always be a good thing.

Most people have likely not seen or heard of this one, given that it is an India release with a religious sounding name. Plus, it’s a bit of a single location, very talky movie. It’s also smart, funny, and has a cool cast and even better cameos. It follows a dinner party with a group of liberal arts students whose night of privilege and culture is interrupted by the arrival of a Right Wing Desert Storm Vet with plenty of strong opinions. It amusingly breaks down barriers of class and stereotype and gets quite dark, while never losing its comedy core. Annabeth Gish and Cameron Diaz are the big names of the main players, but it’s Bill Paxton and Ron Perlman who steal the show.

I don’t know many people who enjoy Kids or any of Larry Clark’s movies. I don’t know what it is – the faux realism, the dialogue, the Mean Streets style shooting, but there’s something so watchable about them to me. I appreciate that most people are going to be offended by them, and that many are going to find Kids problematic – as they should. It’s not an easy movie, dealing with a bunch of, well, scumbags, underage sex, drugs, abuse, AIDS, and other antics we don’t associate with people under 16. When’s it coming to Disney+?

Pocahontas for me was a slight turning point for Disney, towards a downward turn. We’d had the second Golden Age with three legit bangers in a row. Pocahontas is not up to the same level as The Lion King, Aladdin, and Beauty And The Beast, but is at least the equal to The Little Mermaid. While it was a smash, that little dip in quality continued through the rest of the decade (outside of Pixar) and not really picking up again until Princess And The Frog and Tangled. Still, Pocahontas is light years ahead of most other animated movies and always charming even if it’s not one I revisit often.

Do do- do do-do do-do do do do – MORTAL KOMBAT! I was obsessed with the games at the time, so an actual big budget martial arts movie on the big screen with people shooting fireballs and spears towards four armed monsters…what more could a twelve year old boy want? Plus, I was already the biggest Bruce Lee fan in the world. It’s not the best movie in the world, or of the year, but it’s such a lot of fun and remains one of the best videogame adaptations.

9: Now And Then (US) Lesli Linka Glatter

I never understood why this one isn’t as heralded as Stand By Me and other coming of age movies. This is a near perfect movie, with a terrific cast (the kids moreso than the adults), a great soundtrack, and a funny script. It’s gentle, heartwarming, and remains a neat little secret to whip out of the back-pocket every so often and show to someone who’s never heard of it. The film follows four long-term friends who meet up to support one of the group who is about to have her first baby. The group reminisce about their childhood in 1970, with the film flipping back between both eras as they talk about life from the perspective of coming in to adolescence and approaching middle age/middle adulthood. It’s great, it’s lovely, and it stars Demi Moore, Melanie Griffith, Rosie O’Donnell, Rita Wilson, Gaby Hoffman, Thora Birch, Christina Ricci, the late Ashleigh Aston Moore, Cloris Leachman, Bonnie Hunt, Brendan Fraser, Janeane Garofalo, Devon Sawa, and Rumer Willis.

Now that I think about it, there’s quite a few movies on my list that many people won’t have seen or heard of. This is another example. Gregg Araki is a bit of a powerhouse in the Indie world, with The Doom Generation probably being my favourite movie of his. It’s one of those movies which gets thrown in with the post-Tarantino world thanks to a post-modern approach, lots of style, lots of violence, cool dialogue, foul language, gore, and bizarre bits and bops. Oh, and lots of sex. It follows two teenagers (Rose McGowan and James Duval) who are driving through the night and decide to pick up a drifter. There’s an accidental murder which leads to increasingly bizarre and violent encounters as the film turns into a road-movie-fever-dream-with-boobs. McGowan gives her best performance, Duval and Schaech are excellent, and there are plenty of weird cameos as every person in the film claims that McGowan’s character is some ex-girlfriend/wife/friend and it all ends in a massacre.

Speaking of massacres, La Haine is a film constantly at boiling point, just waiting for something unspeakable and ferocious to happen. Another underseen classic, this is perhaps the one most deserving of an audience given its relevance, potency, and power, and simply because it is undeniably brilliant. A French film starring Vincent Cassel, Said Taghmaoui, and Hubert Kounde as three friends in an inner city crime-filled Parisian district who find a Police Officer’s gun in the aftermath of a riot in which a fourth friend was seriously injured. The three friends debate what they should do with the gun – one vows to kill a cop if the fourth friend dies, one disagrees, and one is a mediator. The three travel around the city talking, plotting, dealing with gangs and cops and the city is presented as a melting pot of violence ready to erupt at any moment. It’s super tense, shot in beautiful black and white, and features great performances across the board.

6: Die Hard With A Vengeance (US) John McTiernan

I’m getting to the point where these are the movies which probably made my favourites of the decade post. As I can’t recall which ones made it, I’m going to be brief on each of these – you should know them all anyway. This is the third Die Hard, the second best in the the series and almost on par with the original. It’s great, though the final act doesn’t live up to the rest.

It’s Heat… it’s one of the best casts of all time, and with some terrific set pieces.

1: Things To In Denver When You’re Dead (US) Gary Fleder

Another underseen classic, another fantastic cast, one of the finest movies of the decade.

Let us know your favourites in the comments!