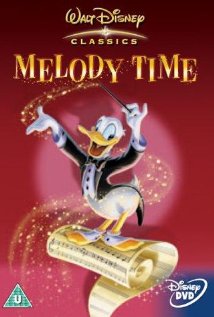 Like the final abdominal clench-and-release while sitting on the John the morning after a night of debauchery and curry, Melody Time marks our final visit to the Disney Package film soundtracks. We close with a whopper though, a film split into seven segments, each with their own song and style. It is a cheaper, more commercially viable Fantasia, but no-one remembers it. There is good and bad, and while the shorts should entertain the kids there won’t be much for adults outside of those curious in the history of the thing.

‘Melody Time’ is a pretty poor opener – lots of swooning violins and choral ‘do do dos’. Quaint melodies and lyrics sung smoothly – so not my thing in other words.

‘Once Upon A Wintertime’ is one I’m very familiar with as it features in one of those Mickey Mouse Christmas DVDs my girls have – the animated part that is. The song is less familiar to me as the Mickey DVD updates it to some other song. It’s slow and boring, then becomes grating and annoying, then becomes boring again – melodies are all over the place and most of the vocal performances are painful.

‘Bumble Boogie‘ starts off fast and furious and builds upwards from there. Lightning fast keys and sudden trumpet blasts keep this one heart and threatening pace. It’s a purely instrumental piece, outside of the spoken word intro, but it’s the best piece so far.

‘Johnny Appleseed‘ is a short one. Thankfully it isn’t too bad – I mean the singing is weird and sounds a little like Mickey Mouse after his nuts dropped, but it’s over before you know it so it doesn’t have time to hurt or entrance you.

‘Little Toot‘ sounds like a euphemism for almost any bodily expulsion. Musically, it has a chorus line flavour but reminds me mostly of what I imagine was played into up market department stores in NYC in the 50s. The music and lyrics do sync nicely with the animation – the lyrics basically are the story for the most part. Unfortunately there isn’t a lot of variance in the melody or instrumentation, aside from the storm section where the brass and percussion become more prominent. It’s another one where is is difficult to separate the music from the action and listen for its own merits.

‘Trees‘ is another instrumental with spoken element – a simple tribute to a tree. More weepy, awful choral singing which just reminds me of a church dirge. Too slow and sleepy for me, and I can’t past those voices. Once the single voice part comes it is too little too late, but that part is significantly better – still not great though.

‘Blame It On The Samba‘ starts out with more bad bad bad choral singing. It gets a little better when the pace picks up but the vocals remain shitty throughout. There are long instrumental sections here which work fine on screen but not so well when you’re blasting down the motorway. That organ does rip though – you’ll get some interesting quizzical looks if you blare that part out the car window in a packed town centre.

‘Pecos Bill’ is pretty funny – I always laugh at the horse’s ‘ya-hoo’. Some amusing lyrics, the vocals are a little better while still falling back on old choral habits, though we do get some yodeling. The song has a brief slow section as Bill wanders through the desert, before picking up again for some questionable lyrical content.

‘Blue Shadows On The Trail’ closes the soundtrack – another Country/Western song, a soulful ballad taking a wistful look at the old cattle rustlin’ days of yore. It’s another song with would benefit greatly from having one vocal, not all the backing crap. Nice whistling and howls.

As with all these package films there is a variety of musical themes but considering each as a whole there isn’t much to distinguish between them – we have a bunch of interchangeable South American or Country songs which rarely differ from on another. No single song from this, or any of the other package soundtracks, sticks out as a Disney classic or even a good song. Don’t worry though, we’ll be back on more (sort of) familiar, sturdy ground next time around.

Let us know in the comments if you like anything from Melody Time or if you agree with my thoughts!