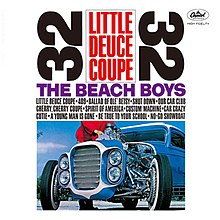 Greetings, Glancers! Wow wow, ease on the breaks there and pull the vehicle over to the kerb. Wasn’t Little Deuce Coupe the name of a song on the last Beach Boys album we listened to? I know they were writing and recording constantly, but are they already resorting to releasing the same material across two albums just to bulk things out? Maybe they just liked the name so much they thought they would take the song and name and build an album around it – because if there’s one thing that sounds like a great idea to make an album about its…. a car? Why not a microwave, a wheel-barrow, or a whoopie-cushion? Those are things people use. Anyway, I don’t know anything about this album, so lets get started.

‘Little Deuce Coupe’ is the same song as on the previous album. I don’t think it has been re-recorded or anything. It’s fine, fun, breezy, but you get the impression that these boys would have been excruciatingly boring to hang around with all this car talk.

‘Ballad Of Ole Betsy’ is another car song. They’re really going all in with this shtick then. I suppose it’s supposed to be clever in making you think it’s about a girl. It’s slow, dreamy, has the easy listening harmonies and melodies. It’s just nice, doesn’t stand out in any way, but is so saccharine you can’t hate it too much.

‘Be True To Your School’ is an odd title for me. That’s one major difference I see between the USA and the UK. Or at least Northern Ireland. I don’t know if it’s really true but I’ve spoken to enough people and seen enough that it certainly seems like you guys are into school pride in a way that simply does not exist over here. All these rivalries and seeming allegiance to the place where teachers teach you stuff is completely bizarre to me. We have no such patriotism over here, beyond the rugby teams, but they have too much of an air of the entitled inbred rapist about them to be considered on an equal intellectual or emotional level. Back to the song… and holy hell the lyrics are shocking. The melody seems like a direct rip off of I Get Around in places, which is both a shame and a plus because it’s still a good melody. It’s all very nice and I’m sure it’ll bring a tear to a certain type of American listener whose rose-tinted glasses have taken over their soul, but for the rest of the sane world this is hammy, alien stuff.

‘Car Crazy Cutie’ begins with a ‘run run do run run’ harmony. It’s good. It feels like a 50s cut, with a very familiar structure and melodic approach to songs from ten years earlier. Lucky then that I like those songs. It isn’t sung particularly well, which is strange, and again the subject matter is nonsense, but that’s a given at this point.

‘Cherry Cherry Coupe’ begins with some bar stool guitars. They’ve run out of words for ‘car’ so they’ve returned to ‘coupe’. Featuring lyrics like ‘Door handles are off but you know I’ll never miss ’em. They open when I want with the cellunoid system’ is as much of warbling embarrassment to me as ‘I don’t want to see a ghost, It’s a sight that I fear most, I’d rather have a piece of toast’. Music’s okay though.

‘409’ is either a road to drive your car on or a car or an engine or some bollocks. Wasn’t this one on a previous album too? It sounds familiar. It’s catchy and short and yes, this was definitely on another album which proves this album is scarping the barrel.

‘Shut Down’ is familiar too. Now I’m paranoid that I have heard all this before. Then again, they have a very distinct sound till now that they don’t deviate from so either I have heard it already or it’s a carbon copy.

‘Spirit Of America’ is one I don’t think I’ve heard. It has the low and slow ‘ba da dums’ and the high and screechy ‘ah ha haaas’ that many of their songs do. I think I like these songs in shorter bursts – if I hear this as part of a larger playlist with other artists I don’t mind, but when there’s a batch of them they begin to grate. Still, this is nice, sounds again like a ballad from another era, and you know exactly what you’re getting.

‘Our Club’ starts with a horn riff which instantly reminds me of Bottom – the British sitcom. Which is a good thing, except that in the lyrics they’re still harping on about cars. They even mention deuce coupe again. Believe me, this is all as bizarre to me as someone making an album filled with songs about wash baskets.

‘No Go Showboat’ is more of the same – high pitch vocals, horns, jangling guitars, and they take things a few rungs down the ladder with some unacceptable hand clapping.

‘A Young Man Is Gone’ at least has a promising title. It starts out with slow harmonizing. Why do all these sounds sound Christmasy? It’s about a kid who died in a car crash. I’m not sure how I feel about the absence of music or the choice of melody. It’s sort of meh, but also interesting because it’s only vocals.

‘Custom Machine’ ends the album and it’s almost identical to any of the other car songs on the album. More descriptions of the car’s look and performance, and lots of wailing ‘waas’ and ‘oohs’. We do get a basic piano interlude. We end as we begin – nonsense which just scrapes into the fun category.

So… you know all the surf stuff got annoying after a while but at least they had the good sense and wit to make the associated feelings which come with surfing universal. At this point the band may as well be reciting a list of their favourite VIN numbers. The lyrics may as well be ‘Remember back in 1967 when For released a Mustang, it was good because my Volkswagon had gone bang bang. And look! Oldsmobile, Chevvy, Dodge, Buick, window wiper, fan belt, greasy nipples, nuts and bolts, Peugeot, Porshe, Subaru. Peugeot, Porshe, Subaru!’ I mean, write about what you love, but it is ridiculous nevertheless. The music hasn’t progressed in any meaningful way – the band at this point was comfortable in their sound and made no attempts to break away from that. It still works, but more often than not it’s repetitive and waning thin, made all the more noticeable by the lack of a killer single. Still worth listening to, but I get more out of it in shorter bursts. When do they start getting good – like Beatles good?

Let us know in the comments what you think of Little Deuce Coupe!