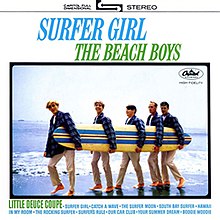 So we’ve had Surfin Safari, Surfin USA, and now we have Surfer Girl. Presumably the next one will be Surfin In Space. Yes, we’re hitting the sand again with another Sixties smash by The Beach Boys. I don’t have much else to say about this – I hope the band continues to improve and that I get to reap those benefits.

Surfer Girl: Ahh, listen to that full and dreamy production. Beautiful. The song is a little too sleepy for my tastes. It’s very sweet. Very pure. Melodies are nothing to write home about.

Catch A Wave: This really is a massive step forward in how full the sound is. A more bouncy song, obviously another ode to surfing so the lyrics are mostly nonsense. It is twee but it’s so much fun that it doesn’t matter. More interesting melodies too.

The Surfer Moon: Ouch, this one hurts when heard through headphones. The right side gets all the sound until the vocals come in on the left. Another dreamy one, but better lyrics this time and the string section slaps another tick in the plus column. The vocals… the sing in this yawning style, but it’s still good. The strings really do give it so much more depth.

South Bay Surfer: Ouch, those beats hurt too. Is that supposed to mimic a group of rowdies beating down your door? This is very silly and cheesy – terrible lyrics, cringeworthy vocals, shouty melodies, and to top it off, my favourite pet hate, hand claps. Dreadful stuff.

The Rocking Surfer: I’m honestly not sure what they’re trying to say with all of these instrumentals. It does nothing that the others haven’t already done – which wasn’t much in the first place. Generic surf rock sounds and tones. You’ve heard it before, even if you  haven’t.

Little Deuce Coupe: So they’ve moved on to singing about cars now. A fairly famous song, I’m not really why though. It’s the same melodies you’ve heard from the band before and the lyrics are car cliche stuff.

In My Room: Now, this is better. The dreamy stuff actually has some meaning, the melodies are backed up with some sort of emotion, and the harmonies build up a wall of sound which you can take to mean the narrator’s thoughts or the deafening timbre of the outside world. Or just take it as a nice song.

Hawaii: Well, I wouldn’t mind going to Hawaii. The vocals are high, even for me. So the beaches and warmth and waves of California aren’t enough. Good harmonies but the main melodies aren’t great and the vocals grate quickly.

Surfers Rule: More silly lyrics about nothing, but it’s silly fun. The main vocals are covered more by the harmonies this time, but we do get more damn handclaps. Lots of ‘woo ooh oohs’.

Our Car Club: A drum intro hints at something different. This does feel marginally different from everything else. Lyrics are a nonsense but it feels like another song they put more thought into, like ‘lets do something different with this one’. The uppy downy rhythm is still there, along with the ‘oohs’.

Your Summer Dream: This one starts differently too, a different tone and approach. Gentle. Lyrics are better. The dreamy atmosphere works. Sweet and simple.

Boogie Woogie: Credit for another different sound. Is it another instrumental though? It still follows the same pattern as the others, though it does feel more manic. Well played. Uppy down rhythm again. It almost feels like it gets faster as it goes along, but that’s some sort of aural illusion.

Another selection of happy, fun, bouncy pop songs. I get the feeling that they had one full album of great material if we take the best of these first three albums, and the rest ranges from your standard filler to forgettable. They’re not reinventing themselves yet, but there are hints of growth and experimentation. The production is light years ahead of the previous albums and the full sound is great. There isn’t one truly great song like we had on the last album, but many are consistently good.

Let us know in the comments what you think of Surfer Girl!