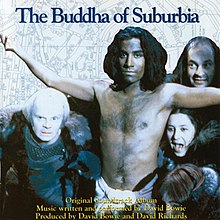 Greetings, Glancers! We’re deep into the 1990s portion of David Bowie’s discography, which means there’s only about 60 albums left to go. Last time out, I wasn’t enamoured with or by Black Tie White Noise, and I fear that I’ll be saying the same about this album. Why, you ask? Two things – first, that it’s a David Bowie album, and I think by now we’ve made peace with the fact that I’m never going to be the dude’s biggest fan even as I respect what he did; secondly, although I knew zero about this album going in, I did see that it’s an avant-garde soundtrack when I checked Wikipedia for the tracklist, which likely means a lot of warbling, instrumentals, and brass. I’m heading in low on this one, so maybe I’ll be surprised.

‘Buddha Of Suburbia‘ opens with a brief warble, then thankfully opens into a simple, streamlined ballad of sorts. Ethereal vocals, discernible melodies, recurring guitar hook. It’s hardly the most exciting song, though it does blast into a middle eight let down by a horn lead instead of any other instrument. The second middle eight blast wisely decides against horn, and there’s an amusing musical call back to a certain big Bowie hit. I don’t hate it – this one I could listen to again, though it does go overboard on some of the effects.

‘Sex And The Church‘ feels… dance? Robotic voice, warbling riff. Odd beats. Clashing and struggling for coherence. If this built to something, I’d likely enjoy it, but at the moment I’m wary it’s just going to repeat aimlessly. Chucking in horns is not what I meant when I hoped it was building to something. Basically half way now, and nothing doing. Usually I don’t mind stuff like this, but for whatever reason it sounds more authentic when it comes from a complete unknown. Of course Bowie had been pulling stunts like this his whole career so my argument is null, but that’s still how I feel. This could just as equally be 30 seconds long or 12 minutes long and not say anything less or more.

‘South Horizon‘ starts with jazz cymbals and beats – almost never a good thing. Then synth creeps around in the undergrowth, swiftly followed by the inevitable brass. Piano smatterings. This reminds me of Homeland. It also reminds me of one of the in built tunes an old Keyboard of mine once had – it has similarly dissonant, and you could play over the top of it to make something even more monstrous. Free jazz – anyone can do it, no matter if you can play an instrument or not. It does gain a computerized beat in the middle, like a Printer trying to tell me it’s run out of ink. It does mesh together more towards the end, but it still comes across as an empty jam session.

‘The Mysteries‘ is, gasp, an even longer instrumental. At over 7 minutes, things are looking bleak for Nightman’s sanity. Swells and swarms. It’s quite nice – just don’t fuck it up with horns and plastic beats. One minute down and it’s calming, reflective. I haven’t seen the show this soundtracked (nice) but I can imagine the sort of scene this music would go along with. It also reminds me of some of the music from Lost Highway. Of course, Bowie appears on it too. Which all begs the response – it’s fine when watching a movie or show with the music accompanying it, but for me an instrumental has to be A* tier or be something I have a deep emotional connection to for me to ever enjoy it on its own.

‘Bleed Like A Craze, Dad‘ opens with plinky plonky piano before threatening to shift into some weird 80s rock mess. Instead it decides upon some weird 80s rock jazz mess. It’s the same bass riff accompanied by Bowie singing ‘Shine shine shine’ over and over, with assorted other instruments dropping in and out. At the second minute, some new vocals and lyrics enter but the musical structure remains largely the same and despite the changes in instruments, it’s very repetitive.

‘Strangers When We Meet‘ goes this time for a dance rock mess, but quickly softens the rock for a more funk pop approach. This feels more like a straightforward traditional song. At this point I’ll take anything that isn’t misguided experimentation. It’s hardly the most exciting song in the world, and average in almost every way, but given the crap which surrounds it, it stands out so far.

‘Dead Against It‘ is immediately another which feels more like a song than a mess. It’s building neatly, lots of 90s digitised noise, quite jangly and repetitive but at less it sounds interesting. It somehow almost feels like ABBA. It’s a low B Tier song, raised to a more solid B given the D and E tier material elsewhere on the album. The lead musical hook and all the little jangled keys will stick in the memory, though the vocals are too over-produced and littered with reverb for my liking.

‘Untitled Number 1‘ is the sort of name every artist attributes to a piece of music at some point. This starts out in an experimental fashion, then sounds like some seedy late 70s Porno, then sounds like some sort of jungle-themed movie. Then it becomes more grounded with the same ethereal, reverb filled vocals and a laid back verse. This one feels more solid C and at the halfway point I’m not sure if it’s going anywhere in the second half that it hasn’t already been in the first. Some extra guitar parts, and of course a load of horns. It does go full Jungle in the final minute.

‘Ian Fish, UK Heir‘ is a name which doesn’t strike me with confidence. Of course, names can be unrelated to the sound of the piece. It looks like another instrumental. Though its opening couple of minutes are pleasingly spacey and ambient. Again, this is fine for a one off listen, or within the confines of the show, but it’s not something I’m ever going to play again.

‘Buddha Of Suburbia‘ is a slightly different version to the opening track. What’s the point? It’s still nice. It’s still not amazing.

I’ll be honest – I’m writing this conclusion months after I listened to the album. That’s just the sort of dedicated awesome blogger I am. I can’t remember anything about the album, but going by comments it doesn’t look like I cared much about any of it. Great! Let us know your thoughts in the comments!

Nightman’s Playlist Picks: Buddha Of Suburbia. Strangers When We Meet. Dead Against It.