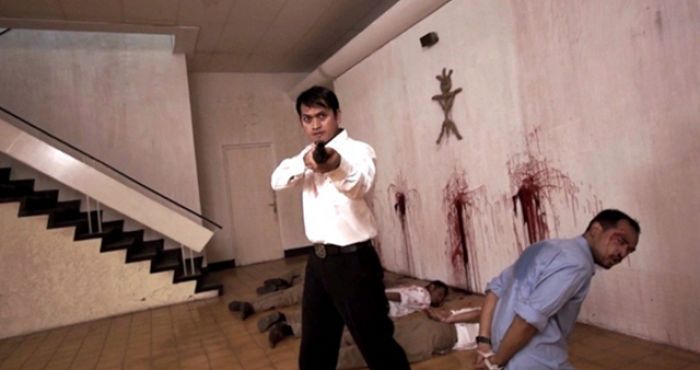 It feels like I’ve been away. I have been. I’ve neglected my usual monthly blog posts and I haven’t even been arsed posting any of the hundreds of already written posts which have been sitting in my drafts for months. I need to go through those and set the scheduling or something. It has been a busy few weeks, with real life stuff taking up most of my free time. On top of that, all of this Marillion stuff is taking up time too, listening to their albums multiple times, taking notes, and then forming those notes into monumentally huge posts. And of course, listening to the related Podcast. It’s fun, but time consuming. That’s not to say I haven’t been watching a lot of movies – I have – but usually in the depths of night by myself, with my wide awake hours spent on TV shows with my wife.

What has any of this got to do with V/H/S 2? Absolutely nothing – I just didn’t want to write a separate post explaining my mysterious absence. Regular Glancers to my stinking hovel of the internet should know by now that I enjoy a good Anthology. The format made a bit of a comeback in the Noughties thanks to an onslaught of new Horror voices, and the relative ease and budgetary freedom of making a smaller film. I enjoyed the first V/H/S for what it was – a mixture of cool ideas and missed opportunities, and it wasn’t long before I hunted down the sequel. Unusually for an Anthology – this is a sequel, albeit with a mostly new set of directors and writers and actors joining Adam Wingard and Simon Barrett. It seems the wraparound featured in V/H/S was only part of a larger story – the discovery of another horde of mysterious videotapes and way too many screens for any sane person – hinting that there is an expanded universe at play.

I say expanded universe, but we’re hardly dealing with MCU or Dark Tower levels of content here. It’s just a framing excuse to allow the narrative to flow between shorts and to loosely connect the two films together (along with the final third movie). Our protagonists in the wraparound are a boyfriend/girlfriend team of PIs/amateur money-grabbers dealing with the more seedy of cases – we are introduced to them in the midst of blackmailing some poor bloke who only wanted a taste of gratuitous titty grabbing on the side. As the couple threaten the man to pay up or pay a visit to his wife, they head towards their central case – a young man’s disappearance. Breaking in to his last known residence, they stumble upon a room in disarray – blankets on the ground in front of stacks of screens and scattered VHS tapes. Just like the first movie, one of team decides to pass the time by watching the tapes, while the other searches the house, and just like the first movie they may not be alone.

The first segment is the not to distant future story of a man who has a camera placed in his eye socket after a car accident. It’s an experimental trial, and the doctors will see and experience everything he does. He heads home to his mansion and quickly experiences some unusual behaviour – things moving from where they were left, the shape of a person lying in his bed. Things escalate. With a premise like this, you’re probably already guessing much of what transpires – nifty use of first person, plenty of jump scares, glitch marks, and the inevitable attempt to remove camera from eye. It’s a fun intro with a few effective moments, but you’re probably not going to remember it in the grand scheme of anthology segments.

The second segment is another idea which has probably been rattling around filmmakers heads for some time, and I’m fairly certain parts of this have been done before. A guy is riding his bike in a forest and finds himself in the middle of a sudden bloodthirsty zombie outbreak – he rides with a couple of cameras (one of which is clearly there only to set up a single gag). It’s another fun segment, a little lighter than the first but ramps up the gore factor. I enjoyed how the buck is passed here with each zombie attack, following a different character every few minutes, and I like how we get straight into things with little set up. Eduardo Sanchez and Gregg Hale of The Blair Witch Project direct this one.

The third segment is the most notorious, and the one I was most keen on seeing when I heard reviews of the film. Directed by The Raid’s Gareth Evans and The Night Comes For Us (one of the most brutal films you haven’t seen) Timo Tjahjanto, Safe Haven follows a documentary crew as they infiltrate a cult under the guise of shining a positive light on its charismatic leader – a man who has been accused various crimes, not least certain activities with children. The four people have their own shit to deal with – the woman of the group (Lena) is in a relationship with Malik (the interviewer) but has got it on with one of the other guys in secret. The cult leader allows the group access to his Jonestown-esque centre of operations, and it becomes clear immediately that nothing about him or his followers is right. Cut to demented scenes of carnage, full frontal facial shotgun blasts, suicide, demons, and assorted chaos. It’s great. It ramps up quickly with little thought given to meaning or explanation, but like the output from both directors it is riveting and dark and bloody and brimming with invention and energy.

Slumber Party Alien Abduction is probably the most forgettable of the bunch – it’s not bad, and I think the idea has a lot of potential, but it’s quite messy in its execution and it suffers from the most shaky cam pitfalls of found footage. It does exactly what it says on the tin – a bunch of insufferable millennials are having a slumber party and are interrupted by aliens. It would have been more interesting if the characters weren’t a bunch of entitled dicks – or maybe we were supposed to enjoy what happens to them precisely because they are dicks. In any event, it’s fine. I like those segments or movies where normal every day shit is interrupted without warning or explanation by the supernatural. Unfortunately the director relies far too heavily on tape scratching effects – once or twice is fine, but every few seconds is ridiculous. There’s a bunch of characters who show up and either disappear before the abduction or are dispatched with basically off camera, which defeats the purpose – not that we cared in the slightest about them. Somewhere in here is a decent thirty minute episode – hell, someone with the skills of John Carpenter could stretch this into a solid supernatural siege movie.

VHS 2 doesn’t differ too much from its predecessor. What little wraparound connecting plot there is serves to adequately set up this film, for those who care, and two link back to the first film, for those who care. The segments vary in quality but each is perfectly watchable and each has a fun idea at its core. It’s a chance for younger directors to show off and have fun, and that’s the overriding feeling I get from this series – they’re fun, sometimes gory, and they act as a little shot of adrenaline and a warning to other filmmakers that these young upstarts mind have something bigger and better up their sleeves. Safe Haven is the highlight, but the whole package is well worth a watch.

Let us know in the comments what you think of VHS 2!