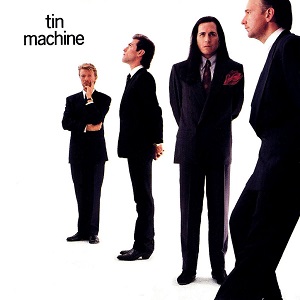 Greetings, Glancers! Don’t worry, this isn’t a new series, it’s merely a continuation of the Bowie marathon. I didn’t realise or fully appreciate that Tin Machine was a separate entity from Bowie – I thought it was just another persona like Ziggy or The Thin White Duke or Mathilda Twinklegrunt or whatever. So Tin Machine was more like a side-project – they only made two albums, in between Bowie’s last solo 80s release and first 90s solo release. I may as well cover them. I’ve no idea what sound they have – did he give in and go 80s metal? The name sounds industrial so maybe it’s a mixture of guitars and electronica. It’s Bowie, so who the hell knows. Well, you probably know – I’m about to find out.

Heaven’s In Here: Okay, an actual phat riff. It’s a little bluesy, it actual has a tin sound, the vocals feel like a 50s vocal group, then it goes a little Caribbean. That’s all before the verse starts. That driving riff and bass strives to keep it grounded as Blues rock. Bowie’s vocals are mostly toned down, not going overboard with highs or operatics. The riff’s good, but maybe not good enough to sustain the song for six minutes. There’s other stuff going on so it doesn’t get overly repetitive. Some shouts come towards the end, some funky distorted guitar play and a fantastic closing solo, some great smacking drums as the whole thing collapses, not much in the way of melody.

Tin Machine: Very metal, a crashing intro. This gives way to a fast paced song which reminds me of the original Thinking About You by Radiohead. The vocals are very Ian Curtis. I know I’ll get heat for this, but Bowie’s vocals just don’t lend themselves to heavy music – rock, metal. Too smooth and overwrought. This is quite fun, but I’d have preferred a bit of a growl in the vocals.

Prisoner Of Love: A more traditional chord intro with a nice vibe. Good guitar line, much more melodic. The vocals suit this sound more closely. The extended chorus is half good, half okay, but the verses are great. I like the underlying guitar work with repeats and wavers and loops under the surface.

Crack City: I am Iron Man? I was only joking, and then the chord sequence comes in and I’m not so sure. There’s surely some ripping off here, right? That and Wild Thing. Assholes with buttholes for their brains? Is he making fun of metal here? Or just the drugs involved. A more aggressive edge to the vocals, again it doesn’t quite work, but he’s really going for it here.

I Can’t Read: More tin drums and distortion and a simple yet potent riff. The riff breaks out and gets better. Cool dark atmosphere, and another much more suited to Bowie’s voice. I think the anti-melodic approach works well here – it’s purposefully robotic. Then the chorus is like an anti-anthem with pop sweetness. Very good. Nice screams and another collapse at the end, though we don’t need the sex noises.

Under The God: Feels like a straightforwards rock song. Then the riff comes in and it’s a little samey to ones which have come already, but it doesn’t last. Great lyrics from what I can pick up, good chorus, good backing vocals, good everything. It there’s any complaint, it probably could have been condensed to a punchier 3 minutes.

Amazing: A little bit of Led Zep now? It as a full sound, light staccato guitar bursts and surging solo lines. It’s very sweet, and another good one.

Working Class Hero: We know this one of course, but it’s a bombastic and different intro. Most covers of this I’ve heard stay close to the original. This is a little more funky. The original is far from a favourite of mine so most covers don’t do it for me.

Bus Stop: Another fast rocking intro. Feels quite punk, though softer. Not a fan of the accent. I would have guessed this was another cover of a punk song I haven’t heard – I don’t think it is.

Pretty Thing: A strange voice floats in, quickly joined by fast biting chords in the vein of more punk bands. It’s fast, not quite chaotic, the pauses keep it fresh. It changes pace and tone midway through, become more of a loose, freestyle instrumental.

Video Crime: It’s cool how modern this sounds for something made in 89. If anything, it’s Bowie’s vocals which date it purely because when I think of Bowie, I think 70s/80s. The guitars could be from any decade since the 80s. This song is a little too slow and start/stop, but the refrains are catchy. Great drums throughout.

Run: A moderately more pop sound for the intro, but yet again one with an atmospheric tone. I love that dual riff and Bowie’s vocals suit the verse melodies to a T. The chorus pays off too. The second half doesn’t have the same immediate impact but it does get more rocking towards the end.

Sacrifice Yourself: Stretching guitars, thumping drums, and an old-fashioned rock beat brought up to date with the surrounding chaos. This one is fun, more shouted vocals, but maybe a little too streamlined and simple. Short too.

Baby Can Dance: A long intro with plenty of guitar distortion and howls and assorted beats. A catchy refrain holds it together. The lyrics seem silly. A long middle section with lots of clashing noise. An okay song to close the album, not the best.

It turns out this one wasn’t well received upon release. I can only assume critics and fanboys were more used to the fawning intellect and electro and glam rather than the harsher, more punk-based songs, more in your face display here. That’s their loss. This has been one of my favourite Bowie listens thus far, the heavier songs and more metal approach suiting my traditional tastes. Plus there was hardly a piano or horn in sight, something which usually brings Bowie’s songs down for me. The album as a whole I can see myself listening to again given that I thoroughly enjoyed many of the songs – that usually means the ones I didn’t like as much will increase in my estimation.

Let us know in the comments what you think of Tin Machine!