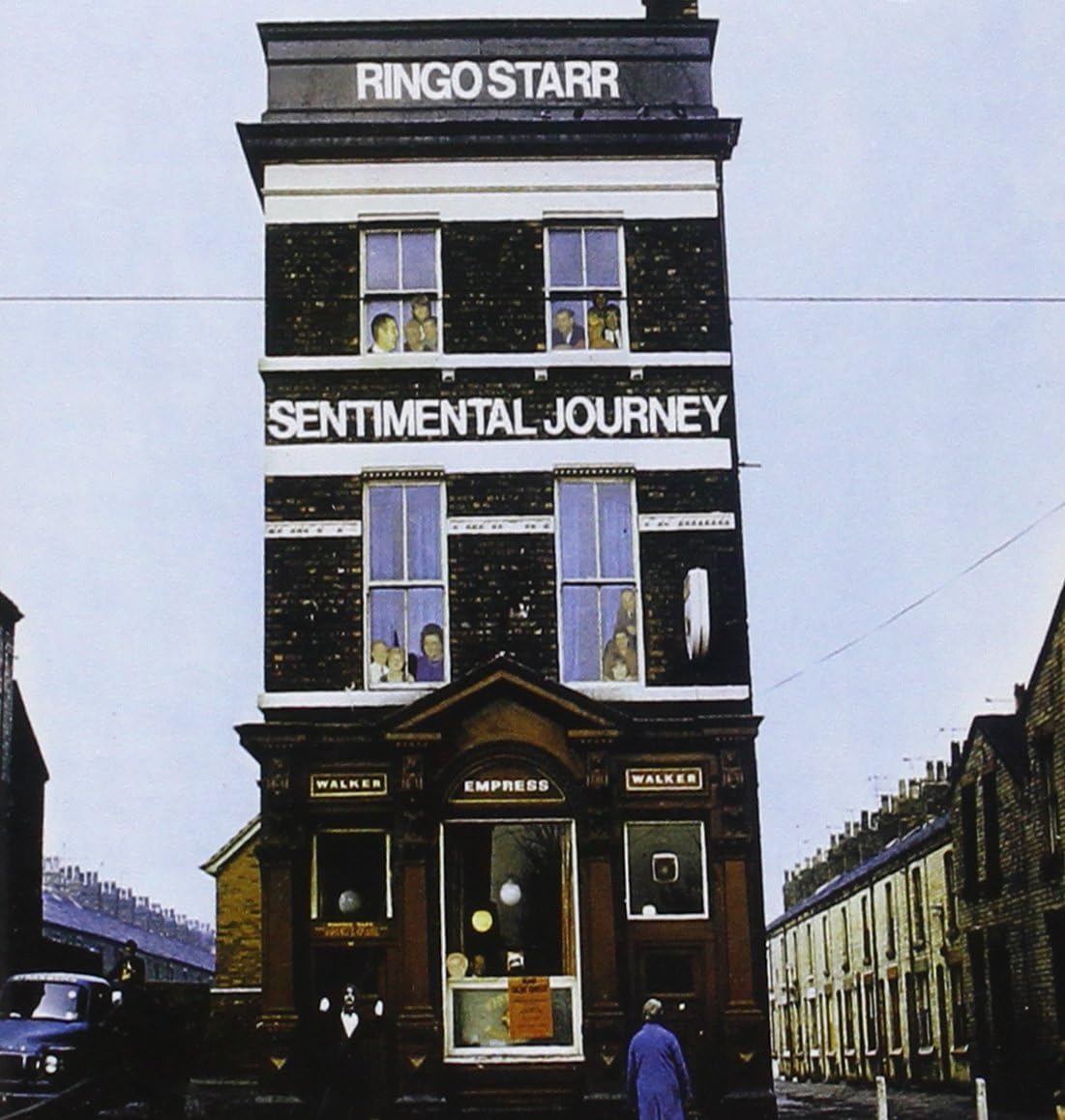 Greetings, Glancers! You know, throughout my life I’ve heard quite a few songs by Lennon, McCartney, and Harrison that they wrote, recorded, and performed outside of The Beatles. Ringo Starr though? I can’t think of any off the top of my head. That’s why I was surprised that he has made so many albums – surely I’ve heard something. As I make my way through this journey, I’m sure I’ll find out. And yet, Ringo’s voice was probably more familiar to me than any of the other Beatles when I was young, thanks to his work on Thomas The Tank Engine.

Sentimental Journey was released in 1970 and is apparently the first non experimental, weird, avant-garde album by any Beatle. I was looking forward to this until I saw the tracklist and released it was a cover album. Ah well, I suppose Ringo had to work through his shit before making something good too. Lets do this.

Sentimental Journey: We open with a song I don’t recognise. It threatens Country, then Jazz, then settles into some easy-listening crooning once Ringo starts singing. I know Ringo’s vocals tend to get a lot of criticism – he can sing fine, it’s just that he’s limited. His vocals work well for things like With A Little Help. The problem here is that the song is junk. There’s a lot thrown into the arrangement – droopy horns, backing vocals, and some unusual voicebox work. A slow, yet detailed opening.

Night And Day: Big band wank. If there’s one other genre I typically cannot find any worth in beyond Country (and Irish) it’s Big Band/Swing stuff. Ironically, Starr’s vocals do suit that style, though he probably doesn’t have the strength or supposed sex appeal the singers in this genre are supposed to have. But the melodies, the brass, the beat, the swagger – everything about this is abhorrent to me, aside from some of the snazzy drum fills, but it’s not Ringo’s fault – it’s just a crap song in a style I can’t stand.

Whispering Grass: More big band jazzy stuff. At least this song has a discernible, appealing melody. The strings are whining, the song is boring, and Ringo’s voice doesn’t have the chops to quite pull it off. It takes a certain level of talentlessness to put violins in a song and make me wish they weren’t there.

Bye Bye Blackbird: Is this Paul McCartney? Or Arthur Askey? It’s the sort of jaunty piece of novelty crap McCartney would have written then passed over to Ringo to sing. Funny for about three seconds, then tragic. It should also be noted that I was listening to this while trying to untangle my Laptop power cable before the battery died, and I almost headbutted the monitor in rage.

I’m A Fool To Care: More brass. More ass. I’m not sure I would have survived in an era when music was this bad – pre 1950. Then again, I’m alive now. If I had been alive then, I’m fairly certain I would have single-handedly invented Metal. Somehow.

Stardust: Oh no. I see the whole album was meant to be a selection of his parents’ favourite songs. That would explain it – parents haven’t a fucking clue. This has some interesting pronunciation.

Blue, Turning Grey Over You: Dear Jeebus, so much useless noise. All that brass makes me feel how pensioners must feel when they hear Cannibal Corpse. The melody is almost non-existant, the trumpets run over everything else making the song nothing more than a predictable selection of brass farts.

Love Is A Many Splendoured Thing: Another of the songs I know. Of course it’s a song I never liked. He keeps the awful choral backing vocals, but his vocals act as a counterpoint and somehow improve things. This is absolutely a song which should be performed solo with quiet vocals and as little backing arrangement as possible.

Dream: I know a version of this. This isn’t much better. Ringo’s verse vocals don’t work at all. It’s just another boring pre-rock ballad with the same rhythm as the others. Nigh on unlistenable.

You Always Hurt The One You Love: At least this one starts interestingly, before the verse arrangement gets things all wrong. More wanky jazz in the middle. Terrible.

Have I Told You Lately That I Love You: We all know this. Apparently Elmer Bernstein had a crack at arranging this. It’s somewhere between a complete mess and something that weird ginger kid in your class who usually said funny things and sat with one hand in his pocket all time would write.

Let The Rest Of The World Go By: Twinkling and tinkling. Then more brass. And the same rhythm as the other dreary ballads. Worse than Love Island.

Well, the title was right. Kind of. It probably was a Sentimental Journey recording these for his parents. For everyone else (me) it means absolutely nothing and is as pointless a piece of shit I’ve ever had the misfortune of hearing. What do you think? Actually, forget it – I never want to think of this again.