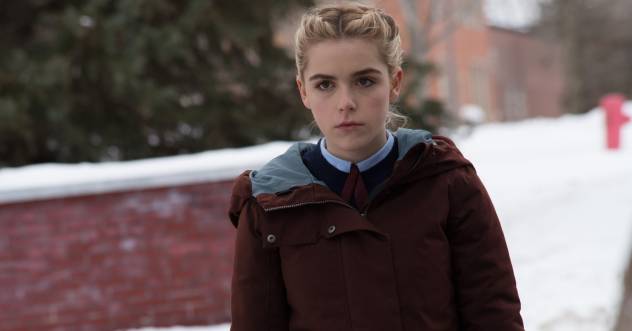 Two things brought me to this film – beyond it simply being a horror movie. The first, is that I love Emma Roberts as an actress, and second is that the guys over on The Shockwaves Podcast wouldn’t shut the hell up about it. No-one else loves horror more than those guys and as well as being involved in the industry, their regular show features horror writers, directors, actors and more – with one episode featuring February’s director Oz Perkins (son of Anthony). I’ve watched it – is it any good?

Aside from what I’ve mentioned already, the film has two major things going for it – how it looks, and its atmosphere – both cold and distant, both interweaving, and that coldness blitzes its way into every other aspect. The characters speak and act in a disaffected way, there are long staring shots of emptiness, and the snowy landscape a la The Shining adds to a sense of unease and claustrophobia. It’s a frequently beautiful, startling movie which aims at the heights set by Let The Right One In, but doesn’t quite get there. The unease is shown to be formed by and coupled with an unraveling mystery and twists which, me being me, were fairly obvious. Unfortunately the film by its very nature will likely frustrate casual viewers and if Perkins has his heart set on loftier ideals and audiences the coldness emitting from the characters is one I reciprocated towards them – I just didn’t care about them or any of what was going on, as intriguing and watchable as it was.

February (or The Blackcoat’s Daughter) will find a cult audience but I don’t think it’s a movie which will demand the rewatches which cult movies often do. Certainly once certain reveals are made some may want to revisit to tie the various strings together, but for me a revisit needs to be fun. Ostensibly, the film is about girls in a secluded Catholic school, staying behind while most of the students and staff have left for a week. One of the girls is an unusual Freshman, the other a promiscuous older teen. It would be unfair to say more, but there are creepy figures, rituals, blood, and blades. It’s a film which has been marketed as a straight horror film but it’s not so simple dealing instead with mental illness, possible possession,  guilt, and loss.

The cast fare well with the material – Shipka, Boynton, and Roberts are each compelling performers, and the cast is rounded out by the likes of James Remar and Lauren Holly in minor supporting roles. There’s plenty for them to do but they are restrained by Perkins’s direction and vision for the film meaning that most lines are delivered as if from behind a curtain, most performances being more like a ventriloquist’s dummy. That’s what they’re going for and if you’re into the style then it’s perfect. For me, I felt like I was being asked to care about these people but being given no reason to. Unlike many horror films, the characters aren’t jerks – they’re just faceless shells who suffer some terrible shit. The film isn’t as good as it thinks it is, or as it needs to be, but what do I know – check it out for yourself.

Let us know what you thought of February in the comments!