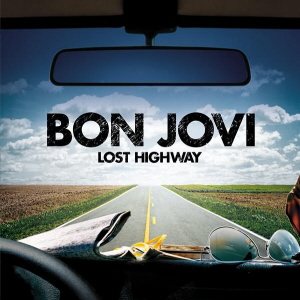 Greetings, Glancers! Here we are, the first Bon Jovi album that I legit haven’t heard a single song from. Before I listen, I take a quick glance at the song’s Wiki page to get a little flavour for what’s in store. It was released in 2007 – by that point I was long gone from University and well into long term employment, so frivolous acts like Bon Jovi had fallen by the wayside for me. If they weren’t one of my favourite bands, or if they weren’t some new exciting act that I had just discovered, then I wasn’t going to listen to them much. It’s sad how it goes, but go it does. Wiki claims the album is heavily influenced by the Nashville sound, which is another way of saying ‘Yo Nightman, you’re going to absolutely despise this’. There may be collaborations with other artists, the album was a success on Country music charts…. arrgh… let’s just get it out of the way.

Lost Highway: Starts okay, typical Jovi sound. Slight banjo jangling. Oh Lord, here comes the slide guitar. I cannot abide slide guitar. Laughably trite and generic lyrics. Very middle of the road, soft stuff, appeasing the denim wearing, wandering patriot that the US inexplicably loves. The video, incidentally, is horrendous. The bridge doesn’t help, some terrible pronunciation. There’s a certain type of listener who swallows this stuff as if it’s scripture. I’m not that person. No edge, no emotion, just empty notes and not adventurous from a band capable of much better. Middling stuff then.

Summertime: I like songs about Summer. When they work, they’re very evocative. They make me happy, not something you’ll often hear me say. In fairness this one does come close to evoking those thoughts. It’s not quite strong enough and some silly decisions in the arrangement don’t help. The main chord chugging and the central riffs do fine – it’s nothing special, but for a band in their third decade it’s fine.

You Wanna Make A Memory: Different intro than what they usually go for. Vocals and a slight beat. Is that some female backing vocals. I was expecting this one to explode like they often do, but it keeps to a more restrained ballad form. Some slight violins, some piano. Gets marginally louder for the second chorus. I do like how it builds. The main vocal melodies are good and it quickly establishes itself as another traditional second tier Bon Jovi ballad – not up their with Always or Bed Of Roses, but still good.

Whole Lotta Leavin: Thankfully the album hasn’t been too country yet, at least not in the way I was dreading. There’s the quite intro followed by explosion I was talking about. Lyrics once again about that yearning for leaving, for adventure, for love. It’s a gentle foot-tapper to be sure, but by the numbers. More middling fare which should keep the band’s most ardent fans happy, but won’t recruit any listeners to the cause or excite someone like me.

We Got It Going On: Wait, wait, wait. Is this a cover band’s version of Enter Sandman. That’s hilarious. It’s a honky tonk rip off of Enter Sandman mixed with Have A Nice Day or It’s My Life. Like those songs, this has a stomp to it and a catchy chorus meaning you can both sing and dance to it. We get an unfortunate spoken part in the middle, followed by voice box solo. It’s pretty funny, but still middling stuff.

Any Other Day: This opens with a summery vibe too, and a nice guitar tone. Songs like this have a tendency to grab me immediately, so I get disappointed if the rest falls away. The lead riff, well it’s not really a riff, but it’s very nice and suits the verse melodies perfectly. It’s all smooth and likable. A late career goldie for me – the chorus doesn’t go overboard with the anthem but acts as a more joyous extension of the verse. A very nice surprise.

Seat Next To You: The opening riff here is almost the same as the one I mentioned in the previous song, though decidedly more slow and peaceful. More female backing vocals. The Country stuff is there, but thankfully it’s more in the background and doesn’t leave me with a bad taste. So far this is a much stronger ballad, reaching close to those upper tiers. Verses and choruses again – not obnoxious, not amazing, but emotive and mature. Two very good songs in a row – can we continue this trend?

Everybody’s Broken: Well, it begins promisingly enough. I don’t know why they went for that drum sound though. Gentle but good melodies. Decent lyrics. A better drum sound joins in. Decent chorus. The song has a carefree sway. The chugga-chugga-chug guitars in the second verse don’t quite work, but I see what they’re going for. Mutterings of keyboards towards the end. It’s not as good as the previous two songs, but better than the ones before those.

Till We Ain’t Strangers Anymore: This is veering close to the whining strings I can’t stand in Country music. For a few seconds at least. Feels like another decent ballad, not up there with the best, but not far behind. Going in on the full duet in the second verse. It’s LeAnn Rimes. She adds something different, she’s always had a (kind of) distinct voice, and while she’s Country the whole thing doesn’t go as far down that terrible road as I feared.

The Last Night: There hasn’t been that one bombastic, arena rock song on the album yet. This one doesn’t feel like it’s going to get there either, based on the opening. It has a middling pace, a soft rock approach. The verses are catchy enough without getting the claws in, with the chorus following in the same vein. It’s another which will please a certain section of the fans but will leave listeners like me asking for something stronger. It’s fine, a step down from the last few.

One Step Closer: Is this going to be the straight Country song I dreaded? No, the verse wises up. Another ballad then, and more soft rock. It’s getting a little samey now – that happens when you get beyond six albums and don’t really change your sound much from the core. Fans will be happy, there’s nothing much wrong with the song, just at this point it sounds too much like everything else. The chorus is nice enough, and I like some of the additional guitar parts which linger in the background.

I Love This Town: Is this the Country song? It starts badly enough, with hand clap type nonsense. And yet… and yet there’s something fun about it. The band sound like they’re having fun and that materializes through the waves into my veins and that feeling becomes infectious. This sounds like about a hundred different songs – everything from Bon Jovi’s own past masters to, most obviously, Dance The Night Away by The Mavericks. What was very close to being an awful closing track instead becomes a crowd-pleasing mini-anthem of its own. I imagine the band employs this one when playing live, singing about whatever town they’re playing in to the delight of the crowd. It’s strange but it somehow works by virtue of being a lot of fun.

A lackluster, if not poor first half gives way to a much improved second – there are definitely a number of songs I’ll be listening to again and would gladly put on my Bon Jovi playlist. I don’t think any of them will crack the band’s best ten or twenty songs, but they’re not far away. A better album than I was expecting by all accounts, one which thankfully didn’t live up to its Country promises and while it lacks that one great single there are enough good songs to keep loyal fans amused.

Let us know in the comments what you think of Lost Highway!

Nightman’s Playlist Picks: Any Other Day. Seat Next To You.