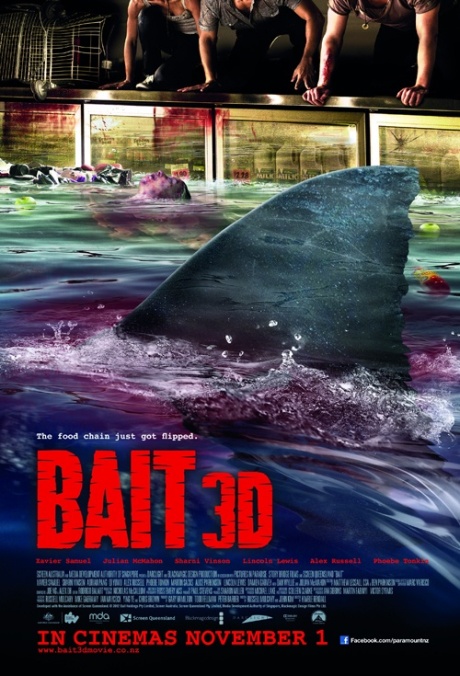 Why do we do it? Or more specifically, why do I do it? You can count the number of good, truly good shark movies on one hand and yet I watch as many of the bad ones as I can, knowing full well they are going to be bad. Is it my inherent love for the mysterious creatures? Is it because most shark movies are horror movies and an excuse to watch annoying people get chomped to pieces? Is it the hope that maybe one day someone will make another truly good one? I think it’s all of those things – I’ve always loved sharks and horror movies, and I always hope that another good one will appear. Reading the synopsis of shark movies, and knowing the companies and money involved before hand is a valid way of anticipating if the film will be good, but as I’ve said, that won’t put me off; it may not be good, but it could still be entertaining.

Bait has the following synopsis:

‘A freak tsunami traps a group of people in a submerged grocery store. As they try to escape, they are hunted by white sharks that are hungry for meat’

Aren’t most tsunamis freak events? Also, that kind of makes it sound as if the grocery store was already submerged. I assume they mean Great White Sharks too, and the fact that they’re hungry for meat goes without saying. If I was trapped in a grocery store, you’d better believe I’d be looting it to the bone. And I wouldn’t be starting with the meat, no, I’d be filling my face with sweets and crisps first – all that top shelf stuff (matron). Plus, that synopsis makes me think of two other movies I’d like to see – one set in a world where all shops are underwater, like The Jetsons but with water instead of space. So.. Spongebob, I guess. Secondly, a movie about a freakshow tsunami – a giant supafly wave which does funky dances and wears an afro.

All in all, I don’t mind the idea for this – it has potential, merging survival horror with loose disaster movie and siege movie tropes. I imagine John Carpenter having a go at this – it’s basically Assault On Precinct 13 but with sharks instead of gangstas and crap instead of goodness. Honestly, it’s not all that bad. In terms of being a cheap B movie, it’s perfectly watchable and gives enough attention to its characters that we have a passing interest in their fates, if not care. The acting is a notch above what you would expect from these things, with famous faces like Sharni Vinson and Julian McMahon providing the ‘oh, I know that guy’ moments. The film also spends time building up to the main scenario, introducing various characters and conflicts before releasing the sharks. It begins with a tragic event as lifeguard Josh watches his friend Rory be killed by a shark during a rescue. Rory was brother to Tina, Tina was engaged to Josh. Flashforward a year and Josh and Tina have split up, with Josh now working in a supermarket. Tina shows up with her new boyfriend – uh oh. Worse, a couple of criminals show up too in a botched armed robbery – oh no. Worse still, a tsunami drops, trapping the staff, shoppers, and criminals together – oopsy. Then to spice things up further, some sharks have been washed in by the tsunami, and I have a feeling they like the taste of young pretty flesh.

At times it feels like there are too many characters, each with their own crap. There are security guards, criminals, managers, shoplifters, couples galore, dogs, and some are revealed to be intertwined and some are revealed to be dicks. There are a couple of ‘twists’ though I pissed off my wife by calling them out long before they were revealed, as I always do. I won’t spoil them here, but they seemed fairly obvious even to me. There was a great moment where it looked like the dog was killed, only for a later cop-out. Hey, I love dogs but I love it just as much when people who moan about dogs being killed in movies (which almost never happens) are frightened that the dogs will be hurt. The dog here especially is more than deserving of being gobbled. But as mentioned, there is a lot going on, characters trying to resolve their differences all while working together (or not) to try to survive and escape. Certain characters are split off from the main group, some have selfish motives, others are fish fodder.

The gore and kills are as you would expect – a lot of improbable shark action and even more improbable attempts to hunt and kill the sharks. The CG isn’t great but it’s still a level or twelve above Sharknado – you’ll get a laugh out of it but can still suspend your disbelieve enough to not let it get in the way of the story. The film is actually known as Bait 3D – so you know you’re going to get some of those scenes to make the 3D stand out. Naturally I watched in 2D, so these scenes added to the ridicule. In terms of pacing and action, the film rattles along nicely and while it hits all of the expected notes, it does so in a fun way. I was never bored even though I’ve seen it all before. It’s much better than the ‘so bad it’s good’ shark movies, but still a way behind Jaws and… Jaws 2. Thanks to an interesting premise, a decent cast of recognizable faces, and actual attention to building story and character (somewhat), Bait is a film for anyone who enjoys shark movies or animal attack movies in general.

Let us know in the comments what you thought of Bait!