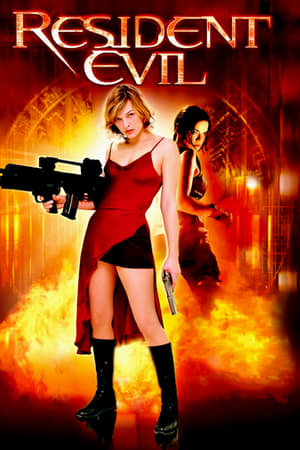 What had the potential to be one of the greatest zombie movies ever is let down by poor studio choices – mainly distancing itself as far from the games as possible. However, it remains a solid action movie if not the terrifying, emotional, complex horror it could have been. Admittedly, truly bringing the game to life for a two hour movie would be an extremely difficult process, and those making it could easily have made a mess, mangling the characters and story. It has always been my opinion that the games should be made into feature length TV movies or a high budget series. This way everything would fit in, and the budget would not need to be great. Of course this is just a pipe dream, and what we have is not as bad as some make out, with many good points.

The film starts with an outbreak at the Umbrella facility. Chaos ensues, and everyone appears to die. We then meet Alice, a woman inside an eerily empty mansion at night. She does not know who she is, and only has flashbacks of her life. Soon a group of marines enter, assuming she is a civilian, and along with the other survivors they try to work out what happened to the facility. They quickly find out that everyone has been turned into zombies by an evil computer program and worry about how to escape. Alice is not what she first appears to be, and neither are some other survivors.

The main problem with the film is that there is little fear created, and it is insanely watered down, with little gore. Fans of the series are used to high tension, jumps, threat and bloodshed, but this is simply not present here. Most of the marines are wiped out in a room which shoots high powered, cutting lasers, while only one is killed by a zombie. The Licker effects are okay, but there are no Hunters, Spiders or Tyrants. As well as this, most of the marines get small roles, look similar, and we fail to feel anything for them. Now the good points; Jovovich is very good in the role and there are a few decent twists, like the game. The way her mysterious past is revealed is clever and well-balanced alongside the escape plot. The star though is Michelle Rodriguez, giving an excellent, physical performance akin to Vasquez in Aliens. The action scenes are dealt with well, especially those involving the dogs, sets and lighting feel authentic for the series and the direction is solid. The film makes a good attempt at creating an original story, and it is left open for a sequel. Of course, us fans would have loved to see Wesker’s antics and our favourite STARS members being picked off. Maybe one day the games will make truly great movies, but why complain when we still have the games. Obviously a let down for fans, but still a pretty good action film.

Let us know in the comments what you thought of Resident Evil!