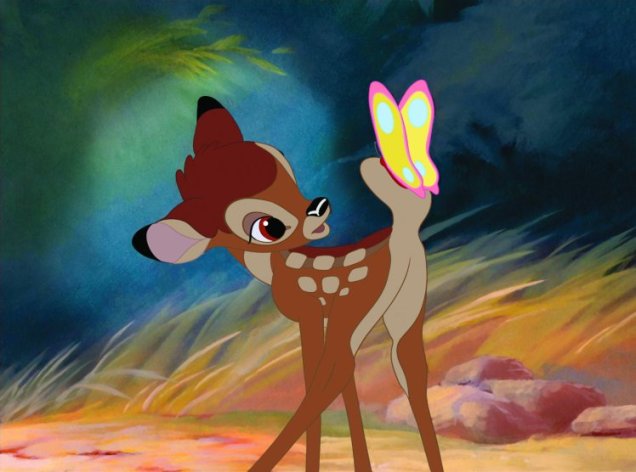 Ba ba ba ba ba Bambiiiii! Well, this is going to be a short one. You know, I maintain that Bambi still has some of, if not the best animated animals ever. There are so many moments in the film that still astonish – the subtle twist of an ear or way an animal walks – all perfect. In the musical department… not so much. Not that you expect a film like this to have memorable songs. Lets go.

‘Love Is A Song‘ is an Oscar nominated song, but what does it really have to do with the story of Bambi? The vocals are weird and old timey, but the actual melody of the title is memorable. The rest of the song is the usual mix of dreary choral voices and strings that sends me up the wall, across the ceiling, up the chimney, and beyond.

‘Little April Shower‘ is probably the most obvious stand out song here, mostly because it is so catchy. Even the creepy childish voices singing don’t hurt it much. This is definitely a song to hear a good singer cover. It all gets a bit muddled with the multiple voices coming in, but that suits the scene and what is going on in the movie.

‘Lets Sing A Gay Little Spring Song‘ deserves one statement only. All together now – WTF!

‘Looking For Romance‘ is a weird one – more weird semi operatic vocals with blasting strings. I quite like the chorus though, again it would be better with just one voice – a good voice.

So… the Bambi soundtrack is one to skip, at least the songs. Some of the other music is great – especially the music that tells you Man (Jaws) is coming. And the movie itself is fabulous. Can’t win ’em all. Let us know in the comments if there are any favourites here.