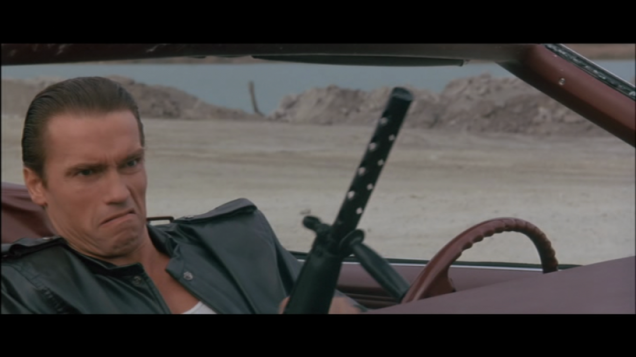 In the eighties Arnie was the action movie King, but Raw Deal is not one of his best. The plot is simple and though there is a lot of action, it is average stuff and there are few memorable moments.

Arnie stars as Mark, an ex FBI agent, now a small town sheriff. When a mob boss murders a group of people including the son of Harry Shannon, an old friend of Mark’s, Harry enlists Mark to infiltrate the mob guy Patrovina’s business, and ultimately get revenge. Mark fakes his own death, changes his identity, and goes undercover. Soon follows much mayhem and explosions as Arnie tries to prove his loyalty to Patrovina while avoiding suspicion by the henchmen. Ninety minutes later, Arnie and the bad guys have a final showdown. You may forget that somewhere his wife is waiting.

This is simply an excuse for Arnie to show his muscles, his deadpan delivery, and crunch a few bones. The action and stunts are okay, there are a few good one-liners (such as the one involving drinking and cake making), and the film is pretty relaxed in spite of all the violence. The cast is pretty good, Robert Davi and Arnie have good chemistry, and everyone seems to ham it up and enjoy themselves. Oh yeah, why is it every Arnie film has a character, or a reference to someone called Harry? Or Huuaarrry, as Arnie says. It just adds to his legend I suppose…

Let us know in the comments what you think of Raw Deal!