When I started writing this series of Listens To! posts, my idea was to:

A: Listen to the tonnes of albums I have acquired over the years that I hadn’t bothered to actually listen to yet and give my thoughts as I listened for the first time.

B: Catch up on those artists that I was aware of/liked certain songs by, but whose albums I had never listened to in their entirety.

C: Potentially get some new favourites based off what I heard or by recommendations from my billions of readers.

D: Because there are a tonne of albums which always appear on best of lists which I have never heard. As a musician, music fan, and human with working ears, I feel that I should give these a go.

To get some focus, I decided to go to 2000 Edition of ‘Colin Larkin’s All Time Top 1000 Albums’ because it looks fairly comprehensive (and there are a few extra sections listing top 100 albums by genre which cover selections left out of the main 1000 which I will also try to cover). 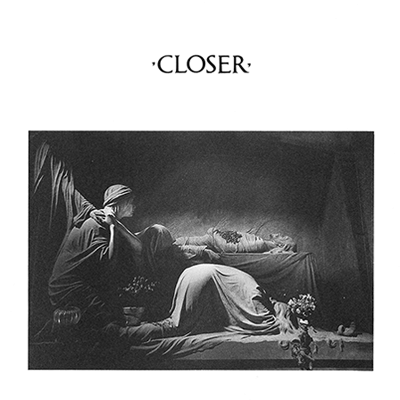 Greetings, Glancers! Once again I embark on a voyage through time to expose my brain to the supposed classic albums of the past. Today we look at one of the most revered cult bands ever in Joy Division, and their album Closer. I’ll let you in on a secret; come Closer; in my younger, more songwritingy and singingy days I was compared favourably to Ian Curtis, though I’m not sure why. I sound more like Michael Jackson when I sing, and while my lyrics tended to fall on the darker side of the human condition there was also plenty of humour and nonsense and childlike wonder. I think people thought I looked a bit like him too. I have probably heard many parts of this album but never paid it much attention. While on paper Joy Division always sounded like exactly the sort of band I would listen to, what I’ve heard over the years never enamoured them to me, as well as the fact that I’m not much of a New Order fan or of all the stuff which came out of Manchester in the aftermath. Moving on.

What Do I Know About Joy Division: Led by Ian Curtis, an enigmatic front man who killed himself at 23 after suffering from increasing bouts of depression and epilepsy. The remaining members went on to form New Order. Every time there is some new Indie resurgence, new bands point to Joy Division as an influence. Famed for a gloomy sound blending post-punk, pre-grunge, and synth sounds.

What Do I Know About Closer: The band’s second and final album.

Atrocity Exhibition: Drums. Funky bass. Scary noises. Morrison vocals and poetry. Scratchy guitars and the odd tin drum blast. Lots of distortion of noise and throbbing. This is the way. This is the end? There is an emptiness or coldness to the sound. Reminds me a lot of In Utero. There’s a repetitive quieter thirty seconds in there which isn’t really necessary.

Isolation: Faster, odd synth noises. This one seems familiar but those synth sounds are quite silly. Bass prominent again as expected, but something annoying about it. Sounds more upbeat musically but I suspect the lyrics are not. I don’t like the effects on the vocals. Heavier drums now. Sudden end. Then comes back. Then ends.

Passover: Funky drums. Solo descending notes. Riff. Bass. There’s so much space and emptiness in the verses. There’s a sinister tone with this one thanks to the relentless beat, near spoken vocals, and eerie guitar. It’s the first song where the guitar feels prominent.

Colony: Drums and bass and guitar chugging together. I’m not convinced that the vocals work as well here, or maybe it’s that strange effect on them. The guitar begins playing something different from the drums and bass which sounds bizarre, clashing but not sounding 100% out of place.

A Means To An End: Another thumping, monotonous beat, more jagged guitar, this one sounding more like a traditional riff. I appreciate the vocals, but I do find them getting on my nerve – too plain and cold and emotionless – it works for me on one off listens, but a succession of songs with no variance in the delivery make everything feel too similar. On the flip side, it all adds up to a more potent, chilling whole album.

Heart And Soul: Funky bass and nice drums. Emerging synth. Like a low chant. Of course now they throw in a different effect on the vocals. Sounds more like Morrison. Still the style and delivery is the same. Mesmeric middle. Sudden heavier drum. More words. More sound. End.

Decades: More percussive pieces to give lifeless industrial feel. Sudden comedy synth. I wanna die in your arms tonight. Later more 80s drums and synth come in. Beat and rhythm constantly changing. Blasts of backing organ synth stuff. The ‘where have they been’ section is the warmest stuff musically on the album.

What Did I Learn: I wouldn’t say I’ve learned anything, but I definitely appreciate them now that I have listened to them. I like the coldness and intelligence and approach and originality, but I don’t think there is enough variance musically or emotionally to convert me to being some die hard fan. There is great stuff here though and I can see why so many love it and love Curtis. I’ll definitely listen to it again.

Does It Deserve Its Place In The Top 1000 Albums Of All Time: I’ll have to say yes, although it’s plain to see that this will alienate many people and it’s clearly something that select groups of people will want to listen to. The style is cold and otherwordly, definitely not the stuff of charts past, present or future. As well as the obvious influences on New Order and everything which came from there, the band (I’m not sure if it was this album specifically though) continues to influence new artists and those on the fringe. Teens, kids, and the placeless and questioning will continue to uncover this album for decades to come.

What are your thoughts of Joy Division and Closer? Let us know in the comments!