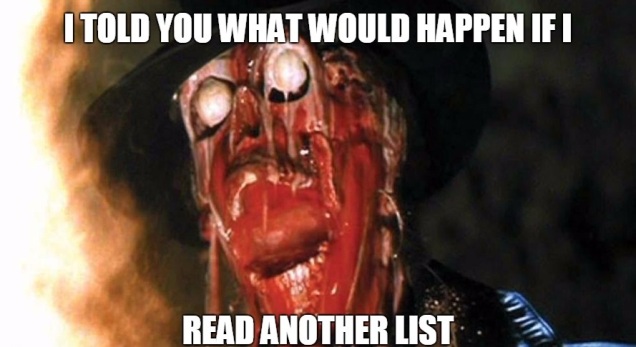 Greetings, Glancers. So, if you’ve been lurking around blogs or tweets in the last few weeks, you may have noticed this hashtag doing the rounds. It’s nothing exciting, but the brevity and transparency of the medium allows you to jot down your choices and share with the world in a matter of moments. What’s it all aboot? Thanks for asking. Basically, you pick your favourite film from every year that you have been plaguing Mother Earth with your presence. Me being me, most of the time, I have decided to branch out a little further so y’all can get to know and hate me a little more.

My branches will cover music and literature too. So, for every year I’ve (officially) been alive – starting in 1983 – I’ll pick my favourite movie, my favourite book, my favourite album, and my favourite song. There’s a caveat on the musical choices as I’m going to pick a song which is not from my favourite album, just to mix things up a little. On top of that, I’m not doing the music in any great detail – more of an afterthought so I’ll probably miss some songs I like more than the ones I give. The ‘official’ info may also be balls. From a film point of view, you’ll get an idea for what my future Oscars posts will look like when I get around to writing them and catch up to the 80s and beyond. As a final twist, I’ll give the top-grossing movie and best selling album/song of the year too, and see if there is any comparison. Today, it’s 1983 – 1990!

My Favourite Film: Return Of The Jedi.

My favourite film from my favourite trilogy (yeah, suck it Empire fans), Jedi has all the adventure of the first movie, all the emotion of the second, tops off the series with a great ending, and has one of the most bad-ass fights sequences ever. The year also saw good efforts from Tony Scott, Coppola, Luc Besson, Cronenberg, Scorsese, Brian De Palma,

My Favourite Album: Piece Of Mind by Iron Maiden

Not too many great albums this year, but it did have possibly my favourite Maiden album.

Best Selling Album: Thriller by Michael Jackson (bit of a cheat as it was released in 82, but anyway..)

My Favourite Song: The Four Horsemen by Metallica

Or No Remorse or Seek And Destroy. All chugging, frantic epics showcasing the young band’s ability to play fast and hard, while changing it up throughout the song so that each is filled with ambition and vitality.

My Favourite Book: The Witches, by Roald Dahl.

I have been reading this to my eldest daughter recently, and remembering just how creepy it actually is – Dahl beckoning the children to trust him with his promises of knowledge to protect you from the REAL WITCHES that grown-ups deny or don’t believe exist. I loved it when I was young, and now I pass it on. Also, for the books I didn’t bother going into research mode too much so I’m picking more or less off the top of my head – this means you’re going to see a lot of repetition of authors.

My Favourite Film: The Terminator

Three films from this year feature in my top ten favourite films ever. The Terminator is probably my favourite film of all time, with A Nightmare On Elm Street being my favourite horror movie. But what about Police Academy? I know.. I know. The problem is you don’t know. You don’t know how hilarious this film is, you’ve been swayed by your smart-ass friends. It’s ok, you don’t have to tell them you watched it and laughed till your face fell off – just watch it and enjoy it on your own.

My Favourite Album: Ride The Lightning by Metallica

Losing a little of the youthful energy of their debut, this sees Metallica maturing and further bridging the gap between heavy music and commercial prowess.

My Favourite Song: Summer Of ’69 by Bryan Adams

Why the hell not?

My Favourite Book: The Talisman by Stephen King and Peter Straub. King and Straub’s first joint effort is an instant classic – an adventure across worlds with a young boy as the major character. Featuring obvious parallels with The Dark Tower it stands on its own feet admirably and has a wealth of charm and magic.

Top Grossing Film: Back To The Future

It’s difficult to argue against Back To The Future but 1985 was a terrific year for now classic adventure and action film – many of which also featured in the top grossing list. 85 may well be the ‘most 80s year’ of the decade. It’s another Arnie winner for me, and one of the most watchable and fun and quotable pure action movies you’ll ever see. The plot is simply A to B, but necks are snapped, Sullys are dropped, buildings are blasted to bits, and steam is most definitely let off.

My Favourite Album: Brothers In Arms by Dire Straits

Actually a pretty crap year as far as I can tell, so I’m picking an album I haven’t even heard since my childhood and hoping it’s still good.

Best Selling Album: Born In The USA by Bruce Springsteen

My Favourite Song: Into The Groove by Madonna

There was any number of Madonna songs and good pop hits by other artists this year… but lets just go for this one.

My Favourite Book: Hard Boiled Wonderland And The End Of The World, by Haruki Murakami. Probably still my favourite Murakami book, this one saw his one chapter per plot style perfected – with two central characters spread over two worlds drawing closer with every page. The inherent strangeness in the novel is downplayed by the semi-passive characters, and all the Murakami trademarks are there – music, food, sex, detachment, free will and fate etc. Throw in the converging plots and a clashing of realism with fantasy and we have a classic.

Even though there’s a vast number of personal favourites this year, nothing really comes close. Even the Arnie movie is crap. But imagine if Arnie had been in Aliens…. holy shit, just imagine.

My Favourite Album: Master of Puppets by Metallica

Metallica hit the big time with this one, belting out classic after classic while honing their craft and striving for ever more complex compositions.

My Favourite Song: Angel Of Death by Slayer

Listen. Just listen. As mind-blowing today as it has ever been – absolutely ferocious.

My Favourite Book: IT, by Stephen King. Another year, another epic by the Master. It is longer than it needs to be and does ramble on at the start for too many pages. But beyond that, this is a terrifying tale with a large cast of characters which covers a group of friends on the cusp of adolescence and later, on the cusp of middle age. You all know the clown, but there is a lot more to fear here – bullies, psychos, sociopaths and more, and once you get over the slow start it flies to the finish like an arrow to the eye.

This was always going to be a tough year, given that Robocop and Predator both feature in my personal top 5 movies ever. So either one wins. Or both. Robocop is probably the better film but in my eyes they are both perfect.

Bad and Appetite For Destruction are arguably the two most important albums of my life, coming along before my later love of Nirvana and Manics. I can’t choose between them and they’re both flawless in my eyes. Bad does however have Just Good Friends which I have to skip EVERY TIME.

My Favourite Song: Think About You by Guns N Roses

Best Selling Song: Livin’ On A Prayer by Bon Jovi

My Favourite Book: Norwegian Wood by Haruki Murakami. The Japanese maestro’s most famous work, a nostalgic coming of age story about love and loss – naturally it’s much more than that. Runner Up? Clive Barker’s Weaveworld or James Elroy’s Black Dahlia or Stephen King’s The Drawing of The Three.

I don’t think there were as many classics this year, or at least personal favourites. Burton was on the rise though, and Beetlejuice is still great.

My Favourite Album: … And Justice For All by Metallica

I didn’t plan to have all these Metallica albums listed, but that is how it has turned out. Production issues aside, this is the high point of the band – the creativity and intensity coming together to create one of metal’s finest moments.

My Favourite Song: Eternal Flame by The Bangles

One of my favourite songs of all time and one which cemented my obsession with Susannah Hoffs.

My Favourite Book: Queen Of The Damned by Anne Rice. My favourite thing about Anne Rice’s Vampire Chronicles has always been the large cast of characters and their collective and individual histories. With Queen Of The Damned she perfected this focus while maintaining a pulsating plot and a vast scope – we fly through past millennia in this story which acts as both an origin and an end to the first era of her novels – the books which follow seem minute in comparison. Runner up? Clive Barker’s Cabal or Banana Yoshimoto’s Kitchen.

There are a few films here i could just as easily have gone with, from blockbusters to cult hits, to indie dramas with fresh faces, but Bill & Ted has probably stayed with me the longest out of all of those with its nonsensical slacker humour and quotable script.

Yeah, after only recently listening to it in full, it’s clear what a fantastic album it is.

This had been chucked about by the band in previous years but saw an official release here – one of my favourites by them.

My Favourite Book: The Great And Secret Show by Clive Barker. Barker finally gets in there. It’s another epic as the man continued to move out of the realms of overt horror and into fantasy. Runner Up? Banana Yoshimoto’s Goodbye Tsugumi.

Some great entries this year – some terrific standalones and sequels from around the globe, including many of my favourite comedies, but there’s only one winner for me.

My Favourite Album: Facelift by Alice In Chains

Slim pickings this year with metal already collapsing with inferior releases by the big bands (Rust In Peace and Seasons In The Abyss are still good) and with grunge bands not quite hitting the big time yet. Facelift is a fine debut though.

I couldn’t be arsed looking through for one-off singles so I just went for a great song from a hit/miss album.

Best Selling Song: Nothing Compares 2 U by Sinead O’Connor

My Favourite Book: Jurassic Park by Michael Crichton. No stranger to science fiction, and a writer who convinces the uninitiated of the possibility of such science leaving the realms of fiction (like Richard Matheson before him), Crichton never forgets that it’s a book about people too. And dinosaurs. Most importantly dinosaurs.

Let us know in the comments what your favourite movies are for each year of your life so far, or alternatively get in on the action and write a blog post or tweet about it. The you can be cool too!