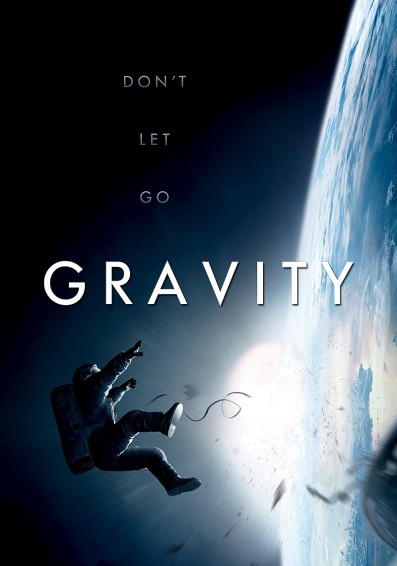 There are certain films I wish I’d seen in the cinema in their original runs; Star Wars, T2, Jurassic Park, Aliens, The Thing, The Exorcist – some of them because of their special effects deserving to been seen as a spectacle on the big screen, others due to their cultural impact or the sheer surprise or shock value of seeing them in a crowd of unsuspecting victims with little knowledge about what was about to happen. I think I can add Gravity to that list as it is, for almost its entire run time, a truly marvelous feast for the eyes, with jaw-dropping visuals and a camera that does things that a camera should not be able to do. I think it’s the defining technical achievement in Cinema since 2000 and absolutely deserves to be seen on the biggest screen possible.

From a story perspective, we are down to bare bones stuff; a small team of astronauts are fixing a Station when calamity ensues and they are left stranded in space, floating through the never with only the dimmest hope of survival. Many have of course compared the film favourably to 2001: A Space Odyssey, and those comparisons are not simply due to the groundbreaking technical work and effects. 2001 also had a fairly non-eventful story, the story being there to more serve the visuals, the experimentation, and to open the floodgates to a world of discussion and hypothesis on what it was all about. Gravity may have a simple story, but it has those open-ended moments and strange scenes which are destined to be pored over for years to come. Not nearly to the same extent and nowhere near the scope of 2001, but enough to allow the film to be discussed as art not merely from a purely, traditionally artistic perspective. Where it succeeds over 2001 is in its urgency, plotting, and acting. While we basically have two main performers, they are both on top form – Clooney his usual charming self, and Bullock going from strength to strength in what must have been a grueling shoot. She plays someone unlike most of her traditional roles, and manages to be cold and detached, emotional, emotive, and allows us to urge and cheer her on as she races to beat the impossible odds.

It’s a movie of two halves, the first being all about establishment and destruction – learning about this group, then watching the collapse and catastrophe, the second half being about redemption and hope, with Bullock frantically trying to keep her sanity and composure while learning to move through tragedies past and present. The pacing is mostly excellent, with an ever present threat of further collapse, with the constant ticking of gravity’s pull, and with one more problem to solve all propelling the movie forwards; it helps that the running time isn’t excessive. Similar to recent flicks like Fury Road and Apocalypto, the viewer is left breathless by the action and spectacle and barely given a moment’s respite to get your breath back. Cuaron has crafted something impossible, like many filmmakers before him, and has surely paved the way for a host of new stories, films, and ideas. The fact that this is both original and pays homage to the greats means this is a love letter to film, but one not so self-indulgent as to leave anyone in the cold. The fact that it is intelligent and well-executed and not simply a visual marvel means it is one that is sure to be held as a classic for years to come.

Let us know in the comments what you thought of Gravity and which films you missed on the big screen that you wish you had seen in their original run.