When I started writing this series of Listens To! posts, my idea was to:

A: Listen to the tonnes of albums I have acquired over the years that I hadn’t bothered to actually listen to yet and give my thoughts as I listened for the first time.

B: Catch up on those artists that I was aware of/liked certain songs by, but whose albums I had never listened to in their entirety.

C: Potentially get some new favourites based off what I heard or by recommendations from my billions of readers.

D: Because there are a tonne of albums which always appear on best of lists which I have never heard.

As a musician, music fan, and human with working ears, I feel that I should give these a go. To get some focus, I decided to go to 2000 Edition of ‘Colin Larkin’s All Time Top 1000 Albums’ because it looks fairly comprehensive (and there are a few extra sections listing top 100 albums by genre which cover selections left out of the main 1000 which I will also try to cover). 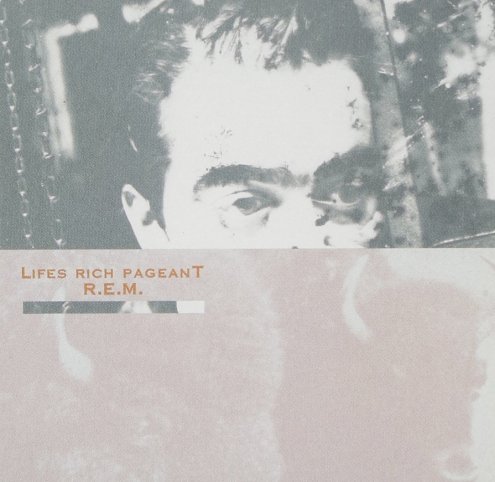 Greetings, Glancers! In today’s edition of Nightman Listens, I, Senor Carlos Nightman, listen to an album by indie, enviro-weirdos REM. REM always pop up on best album lists and they are generally spoken of by bands and artists I like. I’ve never felt a desire to listen to them much beyond the few singles I’ve heard, and although a few friends rate them very highly, most of the people I know who are big fans, are dicks. It’s time for me to learn a bit more abound them and decide for myself, and the best way to do that is to have a gander at one of their albums.

What I Know About REM: For a while in the mid nineties, REM were one of the biggest bands on the planet. They were around long before then, and have been around since. Michael Stipe is the lead singer and both his face and voice annoy me. They are a little too preachy and whiny for my liking, but they have made a number of songs that I’ve enjoyed. I admit I know very little of their catalogue as a whole, and have only heard one complete album – Automatic For The People – it’s good, but not as amazing as people like to say. That should do it.

What I Know About Life’s Rich Pagaent: It’s an album by REM. Looking down the track list I don’t recognise any of the names.

These Days: Fast. Sounds like The Bangles. Annoying Stipe voice. Nice drums. Annoying Stipe howl. Again okay melodies, but nothing grabbing, nothing emotional, nothing memorable. Attempt at a solo. Back around for repeat. End.

Fall On Me: Softer and acoustic mix. Lower vocals. Attempts at emotion. Failed attempts. Ok chorus, but nothing great. The best moment was the opening 8 or so seconds. Decent middle section, but too light. Sounds like faux hippy happy balls.

Hyena: Laughter. Smiths-esque pacing. These drums are horrendous. Stipe howls. Jangling guitars. This is probably the least interesting, least inspired album I’ve listened to so far in this Top 1000 run through. I just feel into a mini-coma during one of the verses, then yawned and re-emerged for the final chorus.

Underneath The Bunker: Nice rip off riff. Is this an instrumental? The guitar isn’t great, there are quite a few notes which don’t quite connect. Voice. End.

The Flowers Of Guatemala: Nice intro, but oh so twee. Sounds like a One Direction ballad. Not long before Stipe’s howls come along. One trick Stipe. How much more of this crap is there? Ok, very basic solo. I get the simple solo thing, I do, but here it sounds like people who can’t play their instruments thinking they’re amazing.

I Believe: Banjo. Finally, someone can play. And replaced with more Smiths licks. Same old tempo, same old melodies, same old drums. Come on, raise the bar. Give me a hook. No no, not a howl Stipe. Jeebus. More dodgy lyrics culled from other places. It’s isn’t clever. France. To be fair, I can’t say that any of the songs have been bad, but I certainly can say that every one sounds like a copy and paste of the one before, and that none stands out. It’s as coherent as a blood spill.

What If We Give It Away: Drums. The Drums, as Brando once said. Moaning about money. What if you did give it away? Another howl. You know, if they changed the tone of the guitar, changed the drums completely, and replaced Michael Stipe with a singer, some of these songs might be good. This is what we have though. Another middle section which is better than the rest of the song. YAWNING.

Just A Touch: Shit, I was doing something else and didn’t realise this had started. Faster, drums finally better. There’s about 1% of Nirvana in the chorus. Organs and by God more murderous howling from Stipe. Who the fuck handed this eejit a microphone? Someone needs to Delorean that shit. I give up. Even when it’s different it’s the same. Is this them thinking they are being heavy? I’ve taken heavier dumps.

What I Learned: Not a lot. 80s REM sounds an awful lot like 90s REM, and Stipe’s voice is still as annoying as a wasp behind your eye.

Does It Deserve Its Place In The Top 1000 Albums Of All Time: Absolutely not. There is, for me, nothing original, nor anything memorable here. It sounds like a thousand other half-assed soft rock albums. Out of the few albums I’ve virginally listened to from Larkin’s list, this is the weakest, and to think it appears at number 162 (and that there are 3 REM albums higher on the list) is a shocker. Does this hold some cultural significance? I can’t think of any reason why this should be included in any Best lists. And I am right.

Let me know in the comments why you think I’m wrong and why this does deserve a place in the Top 1000 albums of all time. Is it one of your favourites? What happened to you to make you say such things?