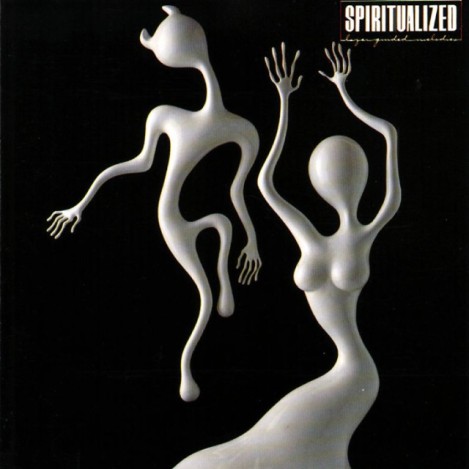 Welcome back to the Top 1000 Albums series, where today I will be listening to an album I know absolutely nothing about. I don’t have any further introduction, so lets go.

What Do I Know About Spiritualized: This may be interesting as I have actually seen this band live. It was at Glastonbury in the early years of this new Millenium, but I don’t have much of a recollection of it thanks to booze and me not really wanting to be there. I’m not sure why I didn’t want to be there and must have got it in my head that I didn’t or wouldn’t like the band and would therefore not be budged on the matter. Do they play trippy, spacey rock? No idea.

What Do I Know About Lazer Guided Melodies – It’s an album by Spiritualized.

And with that, let us embark.

If I Were With Her Now: Guitars beats. Jangles. Funky bass. More instrumental building and soundscapes. Beach Boys. Organ. Horns. Blasts that make you think something good is going to happen, but it never does. Silence. Weirdo guitar. Back. Prog, without the interesting ideas. Or music. Repeat repeat swirl end.

I Want You: Ever since I was a young boy, I’ve played the silver ball. Yawning vocals. Building. Builds to nothing. Like going for a nice drive round the roundabout for half an hour. Aimless sounds. Lazer guided missile? More like popping a Tesco bag filled with Sarin in the middle of a desert and hoping for the best.

Run: Bit more of a tune. Still gives me images of 90s lads strutting down the street in white shirts with floppy hair. The production and sound is superb throughout the album, but that’s barely a compliment. This one must have been a single as it attempts to have a standard commerical structure. Not very interesting though, just more layered sounds that don’t do anything for me.

Symphony Space: Noises. Like one of those cow in a tube toys being turned over and over in slow motion. I’ve made music that sounds exactly like this. It took me roughly two minutes. It was terrible, but still better than this. I’m still waiting for a single bright spark on the album – one single moment worth remembering.

Take Your Time: Oh lord, this one’s near seven minute’s long. Guitar. Repeat. More dozing whispers. There’s nothing like calling people to action by yawning at them. More guitars. Then more whispers. This is agony. Torture via feather. A feather made of spiders.

Shine A Light: What’s this one all about? Swaying guitars and other sounds? Yes. Floating in a haze of melatonin. This is a struggle and there’s still three songs to go. And this thing is over 7 minutes. I’m going to write another post at the same time as this. Something’s happening – it got louder and more screechy. Still droning and swirling into a pit though.

Angel Sigh: I can only imagine this album gets a lot of fawning praise from bleary-eyed critics startled who liken the experience of listening to this to going on some transcendental journey, closing their eyes and floating away. I can do that by listening to someone breathe, by hearing the rain outside, by feeling the wind. Creating music that some people feel performs the same job is not a talent. All you need is repetition, easy, basic music, and nice production to pull it all together in a non-jarring fashion. Something probably happened in this song, maybe there was some music going around and around, there were probably flakes of guitar and the light drizzle of a cymbal.

200 Bars: Finally we reach the end of our journey. We’ve lay on our sofa, closed our eyes, and contemplated existence. A knife AND a fork? Conkers. Rolling up a children’s play mat and sticking your arm through the tunnel, all the way up to your shoulder. Catching the warmth of a cough in your fist. Fishing. There’s more to life than this shite, people. Get off the sofa. Get on the sofa. Don’t waste time listening to this tripe and believing it’s telling you anything other than ‘ha ha, you just gave me money for nothing’. Some singing and some other noises and stuff happen towards the end of this song. There is softer singing and less stuff in the first half.

What I Learned: That I was right to pay these guys no heed all those years ago. That no amount of nice production and sleepy playing can make a good song without all the other elements.

Does It Deserve A Place In The Top 1000 Albums Of All Time: Absolutely not. Aimless meandering and boring ideas, boring sounds to make non-existent songs. There are plenty of bands out there who do the same thing, but with a hell of a lot more talent and emotion.

So what do you guys think? Am I dead inside? Is this truly one of the finest albums of the 90s, an ethereal trek through lush, dense atmospheres, or is it just a bunch of noodling and shoe-gazing? Let us know in the comments!