It’s Tuesday again, and that means it’s time to look at ten films by one of my favourite performers – this time around I check out Robert De Niro, one of the finest actors of all time and someone who has perhaps more iconic performances in history. There are so many films I have not been able to discuss here, and while recent movies have not been as well received, for over thirty years he has been at the top of his game. I haven’t given much thought to the list order below, it’s a mixture of favourite De Niro performances and favourite films that he has been a part of, but really the numbers are not important. 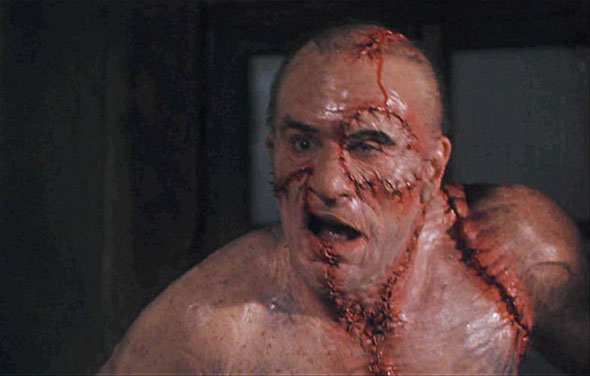 I may get a lot of stick for this one, considering some of the much more acclaimed films I haven’t included in my list. De Niro transforms himself once again and maybe becomes the most un-De Niro of his career. Unsurprising given the character he plays here (The Monster) but he still manages to bring power, gravitas, and emotion to the role. I’ve always enjoyed this version of the story – much of it comes down to the look of the film, but you have a strong central cast in Branagh, De Niro, and Bonham Carter. The film retains a bleak tone, and a truly gothic approach, ensuring it is an authentic vision of Shelley’s masterwork.

Although more famous for Stallone’s performance, De Niro also puts in another heartfelt character examination as he plays an unusually (for him) good, plain cop wanting to shut down corruption within the force. In this ensemble film with some terrific actors, De Niro stands out primarily because of how normal he is when compared to the characters he is more known to play.

Ronin is one of the best films ever to not really be about anything – it’s one big mis-direct for most of the movie as we follow a group of mercenaries, led by De Niro who are tasked with hunting down some mysterious briefcase for the IRA. Throw in some intrigue, back-stabbing, Russian mob, political nonsense, action, and some of the best car chases ever filmed and you have a riveting film which is endlessly watchable. There is a brilliant cast each unleashing strong performances, and De Niro leads the way tricking the viewer, his companions, and his enemies. 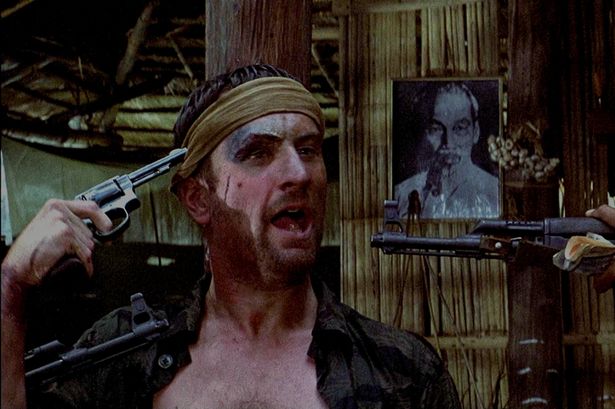 This one cemented De Niro as a long-lasting talent and features some of his most gruelling work, both physically and emotionally. We follow De Niro and his friends starting out as casual workers and hunters who are abruptly ripped out of their simple lives to the horrors of Vietnam. De Niro’s Mike is one of many characters who change dramatically throughout the course of the film, though De Niro is possibly the one who tries to hold on to his previous life most dearly even though he resorts to brutality to survive. It’s a startling, powerful film with a superb cast, and allows De Niro opportunity once again to craft another iconic figure.

De Niro plays the villian in Michael Mann’s opus, but it is the duality between his desire for a normal life, his need for one last score, and his obsession with beating the cops which ensures the character is more than a by the numbers crook. His scenes with Pacino are electric, but so are his scenes with Kilmer, Brenneman, and so on. With Mann in control, with wonderful dialogue, and with De Niro and co at their best, this was always going to be a classic. 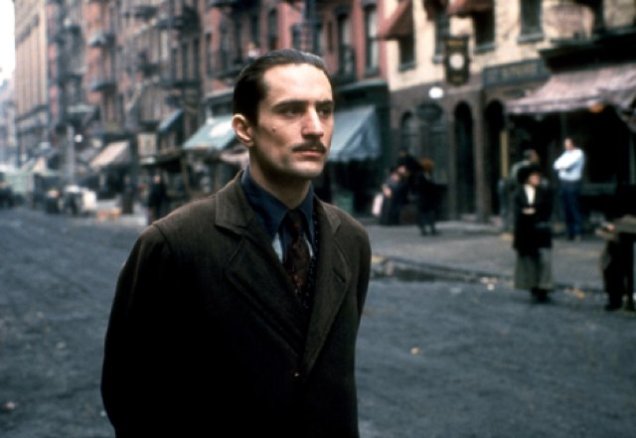 De Niro’s first big outing sees him filling in Brando’s shows – arguably the most difficult job in cinema history, but he manages to be everything Brando was and more, carving out his own style as the young Vito Corleone entirely separate from the Don which Brando portrayed. Arguably he is more like Pacino in the first film – a young man trying to find his way in a violent world, eventually being drawn into that violence and its seductive potential rewards.

Going through some shocking physical changes earned De Niro an Oscar win, but even if he had not piled on the pounds, his performance here is nothing short of flawless. La Motta is an ugly figure, a man driven to success but easily swayed by the demons which try to pull us down, and De Niro and Scorsese never flinch from showing the grim realities of success, of downfall, of the power-hungry, and of sheer masculine brutality. The fights are wonderful of course, but it is that contrast of the glory of victory and adoration of the crowd juxtaposed with all the wife and brother beating which make this an anti-Rocky and one of the best films of the 1980s.

To prove that he wasn’t a one trick pony (though with Mean Streets earlier he had already done this) after the success of The Godfather part II, De Niro set his sights on another iconic character. He converts Travis Bickle from words on a page to a brazen, all too real paranoid romantic, a man who is steadily losing his mind in the midst of all of the scum and filth he sees surrounding him. Scorsese and De Niro again create another ambiguous masterpiece as Bickle is a clearly disturbed and dangerous figure, but his attempts at saving others and his ironic ‘happy ending’ merged with his ultra violent descent and near assassination attempt leave the viewer with uncomfortable questions to ponder on.

The film that brought De Niro successfully into another decade and again partnered him with Scorsese and Pesci, Goodfellas is another extraordinary tale with high levels of violence, realism, and humour. Although the dreamlike quality of much of Scorsese’s work is present, this is largely an effectively realistic portrayal of mob life – from both the inside and outside, from both the good and wrong side of the law. It’s hard to say who steals the movie here with Pesci, De Niro, and Liotta all superb, but De Niro is the one who manages to hold sway over the more maniacal and obsessive other duo.

People forget that De Niro was even in this movie. In fact, it’s rare that I hear people talking about the movie at all, unfortunate because it features one of De Niro’s best performances – and the same can be said for Costner, Connery, Garcia, and Billy Drago. De Palma keeps the tension high, the entertainment flowing, and De Niro is free to give his version of an Al Capone who is on his way out thanks to superhero good guy Eliot Ness. It’s an unusually beautiful film given the subject matter, and although there is plenty of violence there is a lot of heart as Costner leads his family – both at home, and his family at work to hopefully safer times. De Niro is excellent as Capone in a performance which drew a substantial amount of criticism, but he comes over as a Tony Montana style leader, his grasp on reality and on his own power pouring away, even as he still leads with an Iron Glove (or baseball bat).

What is your favourite De Niro performance and film – is it something I’ve missed from my list? Do you prefer De Niro’s comedy roles or his more serious, dramatic performances? Let us know in the comments!