Greetings Glancers! We’re back in familiar 80s Pop territory again, with the Queen of sex herself, Madge!

After the monumental success of previous album Like A Virgin, Madonna was on top of the world. Gaining fame in the music world is easy, but maintaining that level of success is something few artists achieve. Madonna had already launched a few non-album singles and outtakes from a variety of movies, and had branched out into acting too. True Blue had the difficult job of following up an album which has since been named as one of the defining albums of that decade, but it succeeded – at least in terms of sales. True Blue was an absolute monster, becoming the biggest selling album of the decade by a female performer, and still ranks among the biggest selling releases of all time. It roughly followed the same power pop/dance oriented pop as her earlier work, but also saw her trying a few new styles. Looking at the meagre nine tracks of the album, I instantly recognise four of them, but I’m sure I’ll remember a couple of the others too. Lets see if this one holds up well today, and maybe I’ll catch something new that I’ll enjoy. 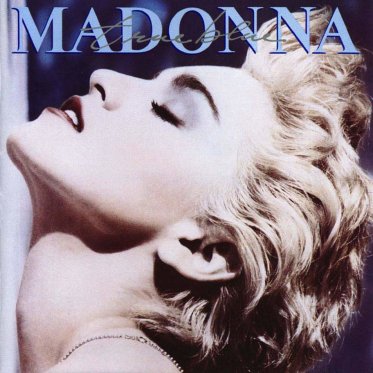 Papa Don’t Preach: Strings! I’m a big fan of strings in music, so yay to Madonna. I must not have heard this in a while as I don’t remember the song starting this way. The vocals are deeper than usual, the music is still funky, and the lyrics are interesting. Of course, it’s the chorus I remember thanks to great melodies. The vocals are quite strange, being so deep. The bridge into chorus is excellent too. The song loses a little of its steam towards the end due to a little unnecessary repetition, but all in all it’s still great, one of her best.

Open Your Heart: Big drums and 80s crystalline synth. Funky guitars and weird sounds. The verse isn’t great, but I do remember the chorus and bridge. It’s a straight forward rinse and repeat song, catchy at certain points, but not as strong as some her more recognisable hits.. still good though.

White Heat: Okay, that’s why it’s called White Heat. An odd opening, and when the music starts it gets even weirder. More 80s synth and funky beats which has high nostalgic value, for me at least. It’s a bet of a mess though, not particularly catchy or anything of note in verse or chorus. More sampling appears in the middle before a final chorus repeat leads to the end.

Live To Tell: A slower, more sombre, yet eminently atmospheric 80s opening. The music is fine, but the vocal melodies don’t go anywhere – too soft and drifting and one-note. The melodic change after the three-minute mark picks things up and it becomes much more interesting, with the lyrics meeting the music nicely. It all sounds very Roxette in these moments, and it’s a pity that the melodies of the first half aren’t as strong as those in the closing moments.

Where’s The Party: This one sounds very upbeat and silly. Yes, so far nonsensical lyrics about going out and having fun at the weekend, yawn. Musically it’s the usual 80s sounds and synthetic beats, and the melodies again aren’t very strong. I suppose the chorus may be catchy enough if you’re singing along while boozing it up, but that’s not much of a compliment. Weird sounds and words and effects come in at one point, serving to extend the song by another minute. Not great, but dumb fun for kids.

True Blue: Aah, another favourite of mine. A pastiche of some of the 60s pop which ladies were making, it’s a fun song with great melodies throughout (take note Where’s The Party). It’s almost too happy and twee and cheesy, and certainly nostalgia is playing a part in me liking it so much, but it truly is a well crafted piece of music that will glue itself to your psyche for days. The middle piece is also good, and proves that you can extend a song for an extra minute without making it feel cheap.

La Isla Bonita: A cynical attempt to cash in on another market? Well, obviously, but still a great song once again – verse and chorus melodies folks, that’s the key. Much of the annoying 80s stuff is stripped back to give this a more pure, timeless feel. The best simple songs can be stripped back to only their vocals, or a single accompanying instrument and still retain their power, and that I imagine is the case with this one.

Jimmy Jimmy: How many of the songs on this album start with a rapid-fire drum blast? All of them? I think it’s all of them. A fast paced one here that seems to be a love song or dedication to some Jimmy or other. Melodically fair at best, the chorus approaches something good but doesn’t quite get there. Decent middle section. Unlike the previous song, this is exactly the sort of track that would not sound good stripped back, relying on all the 80s crap to give it an identity.

Love Makes The World Go Round: Two seconds of funky bass before the drum blast this time. Strange timing on this one, so plus points for being different. It’s quite jarring, all those sudden pauses, but they work. This one has a Spanish rhythm too, and the chorus again is only okay, not reaching the high points. Verses are pretty average. A nice message, not quite MJ or Lennon or whoever, but at least it’s something different from singing about your humps or whatever. Okay middle section. Quite an apt album closer, fun and uptempo and fresh enough to make you want to flip your cassette over to side 1 again.

A selection of obvious big hitters, a few average, forgettable tracks, and one or two duffers. On an album with only 9 songs you can’t really afford a couple of duffers. Not that anyone cared of course given how many copies it sold. Even the worst songs aren’t terrible, but only a few are truly special. I was hoping for a few good surprises, but the songs I wasn’t familiar with weren’t particularly interesting for me. A few of those non-album tracks of this era were pretty damn good and would have made this a more robust effort. We’re getting towards the stage now where I’ll be less familiar with more and more of the songs on each album, and we’ll be moving into the 90s, a decade in which Madonna continued her wild success.

Let me know in the comments section what you think of this album? Is this Madonna’s peak? Does this contain any of your favourite songs, or do you have any special memories of True Blue?

To catch up on my feeble musings on Madonna’s previous albums check here: https://carlosnightman.wordpress.com/2014/03/27/nightman-listens-to-madonna-madonna-1983/

One thought on “Nightman Listens To – Madonna – True Blue”