This was an odd year for Foreign Films in that many more famous names were left off the list in favour of the lessor known or up and coming Directors of the world. Official Winner, De Sica’s Yesterday, Today, and Tomorrow is an interesting trio of comedy tales but it is the duo of stars- Loren and Mastroianni who really shine in vastly differing roles over the course of the film. Raven’s End is Bo Wilderberg’s often powerful coming-of-age Drama which gets credit for being both bleak and hopeful depending on whether you sympathize with some of the selfish charatcer involved or not. The Umbrellas Of Cherbourg is a successful and ambitious French musical known mainly for the strong compositions by Michel Legrand which would later become hits. Strangely these songs were not nominated for this year’s Oscars, but next year’s, in a bizarre Spac World-esque twist. Sallah Shabati is an engaging Israeli satire about immigration and introduced Topol to the world, while The Woman In The Dunes is a startling feast for both eyes and brain. A benchmark in Asian Avant-Garde, it is still compulsive viewing today.

My Winner: The Woman In The Dunes 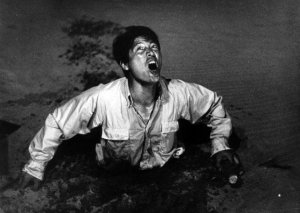 My Nominations: The Woman In The Dunes. Band Of Outsiders. Before The Revolution. A Fistful Of Dollars. Marriage, Italian Style. Onibaba. Red Desert. Kwaidan.

My nominations are largely different in this category this time around with Italy and France giving some of their greatest exports.  Band Of Outsiders is possibly Godard’s most accessible film yet retains many innovative moments while Marriage, Italian Style (which receives official nominations for the next two years) sees this year’s official winning director making one of his best comedies. Onibaba becomes one of the most influential Asian horror films of all time, surpassed possibly only by Kwaidan (until the emergence of J Horror in the 90s), while A Fistful Of Dollars is an obvious classic. Bertolucci’s little known Before The Revolution is technically superb and gives insight into a bleak and confusing series of relationships, while Antonioni’s equally little known Red Desert offers grim, beautiful visuals and small story swamped by change and implied incidents.

My Winner: A Fistful Of Dollars.