Official Nominations: 1962 was, above all, a year of epics, with Lawrence Of Arabia, The Longest Day, and The Mutiny On The Bounty all providing big budget thrills. It was also the year of MAN with the major nominees featuring near all male casts. Indeed, LOA is the only Best Picture Winner to have credited roles for only one sex. David Lean showed that he was the undisputed king of the epic, and that he could go one better with his all encompassing tale, while a couple of smaller scale films- Morton DaCosta’s The Music Man (a faithful screen adaptation of the Broadway hit), and Robert Mulligan’s To Kill A Mockingbird had just as great an impact. Lean’s earlier success with River Kwai meant he was a directorial force to be reckoned with while Darryl F. Zanuck was a massive Hollywood legend with numerous wins and nominations bursting out of his trophy cabinet- he assembled a strong cast of directors and actors to make another all star cast. My winner though, sneaking in behind the defence, is Milestone’s Mutiny On The Bounty; this remake out does the original in every way, with great performances from the 3 leads, Brando, Howard, and Harris, it is an exciting, harsh voyage which was not well received at the time. Arabia is almost too clean, too refined, while The Longest Day was groundbreaking but lacks something entertaining. The Music Man, for me, is just another throwaway musical, while with Mockingbird I struggle to look past the fact that it was one of those books forced upon us in school, and I don’t share the same love for it as many do.

My Winner: The Mutiny On The Bounty

My Nominations: Cape Fear. Dr. No. Lolita. The Mutiny On The Bounty. Whatever Happened To Baby Jane? The Manchurian Candidate.

I’m torn between winners from my personal nominations because there are several hits here, with Cape Fear being an outstanding thriller, Dr. No kick starting one of the greatest movie franchises, and Lolita being yet another Kubrick classic. As it’s my blog it comes down to personal preference so while Dr No is by no means the best or my favourite Bond film it gets my vote. Rarely before had we seen such a fascinating and winning mix of action, humour, drama, tension all weaved around a strong plot with subersive characters and good performances. This is the starting point for all modern action movies and gave other film-makers a new benchmark to aspire to.

My Winner: Dr. No 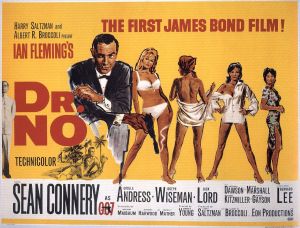